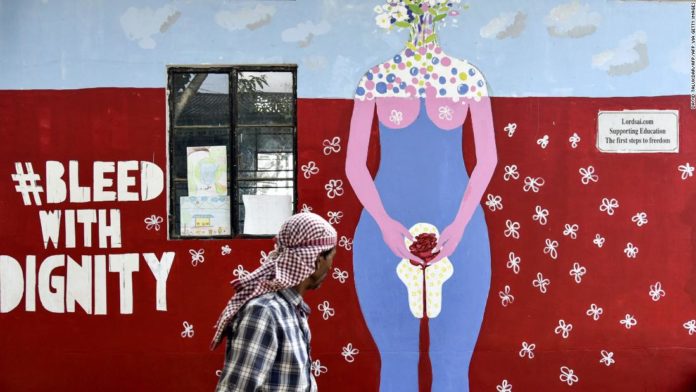 When women here menstruate, they’ve got two options.
They can carry their soiled sanitary napkins to a fetid, overflowing open garbage dump 100 meters (328 feet) away. Or they can stuff them down the drain or throw them out the small window of this tiny toilet block, and avoid the shame that comes with carrying their waste in the open.
In India, where menstruation remains shrouded in taboo, many women opt for the latter.
Across the country, women in many homes are not allowed to cook or touch anyone during their period as they are considered impure and dirty. Some are even asked to sleep on the floor, or outside the house, for several days until it passes.
That social shame can prevent women from talking openly about menstruation, meaning many girls are not taught safe, hygienic practices.
For years, government initiatives and non-profit groups have been trying to change this — especially in rural areas where the problem is most prevalent.
But now, a new breed of community-minded volunteers and entrepreneurs is emerging to help spread awareness of menstrual issues — and some of them are men.

Nishant Bangera, 28, first learned about the difficulties Indian women face during their period when he took a corporate social responsibility program offered by his employer three years ago.
The activist was shocked by how little he knew about period-related social stigma, awareness and hygiene, so he started an initiative called Period of Sharing to break the stereotypes around periods.
That initiative holds awareness sessions and talks across slums and schools, and organizes “Maasika Mahotsav” — an annual week-long festival that tries to dispel the myths around menstruation through theater, music, dance, and games.
Bangera recruited male as well as female festival volunteers because he believes it is necessary for genders to work together to normalize something that is just biology.
But in India, menstruation is about much more than biology. It’s about outdated beliefs, social pressures — and costs.
Many women in India cannot afford sanitary napkins — and many are not aware of hygienic alternatives.
A 2015 National Family Health Survey of women aged 15 to 24 showed only about 58% used napkins and tampons that were considered to be hygienic.
Menstrual health activist Swati Bedekar said some women in rural India use whatever they can as substitutes — even sand, ash or cow dung.
Bedekar is the founder of the Vatsalya Foundation, Vododara, an organization based in Gujarat that helps women set up pad-making units at home to generate income and promote hygienic menstrual care options.
She said when women use rags or cloth, they often don’t wash or dry them properly to avoid the shame of the cloth being seen.
That can have a negative health impact: Reproductive tract infections are 70% more common among Indian women with poor menstrual hygiene, according to a study cited in a 2014 report by philanthropic organization Dasra.
The same report says girls’ education can also suffer. Access to water and toilets is limited in some rural areas, while some schools don’t have any toilets at all. For many girls, it’s easier to stay at home when they are menstruating, which not only deprives them of an education but also limits the country’s economic growth.
Keeping girls in school could add billions of dollars to the Indian economy and help push the country closer to achieving gender equality, the report said.

Men ‘can’t do all the talking’

Bangera isn’t the first man to get involved in menstruation education.
Back in 2014, Arunachalam Muruganantham was named one of Time’s 100 most influential people of the year for making good-quality sanitary napkins for his wife.
He did so after realizing that she was using old cloths to deal with her periods, a practice widely followed by other women in their small, southern Indian city of Coimbatore, in the south Indian state of Tamil Nadu. His story inspired the 2018 Bollywood movie “Pad Man,” which featured leading man Akshay Kumar holding up pads as part of the film’s promotional stills.
Inspired by Muruganantham, 26-year-old Chitransh Saxena, started MyPad Bank, an NGO that distributes sanitary napkins to underprivileged women in Bareilly, a city in Uttar Pradesh.
A visit from his team was a new experience for Nisha, a 25-year-old mother who lives in Bareilly and goes by one name.
“I’ve always been used by men,” said Nisha, whose husband left her when she was pregnant with her second child. “Here was a man helping out by giving pads. Why would he and his team waste time if they didn’t want to do good by us?”
In 2015, law student Arjun Unnikrishnan co-founded The Red Cycle, which works towards making women aware of their right to good menstruation hygiene.
The 23-year-old said the growing involvement of men shows a socio-cultural shift, where young people take action on issues that matter to them.
But he cautions that men are only facilitators — they can’t do all the talking. “I don’t think men can dominate the space as we are non-menstruators,” said Unnikrishnan, who is based in the southwestern state of Kerala.
Although it is still unusual to see men in the menstruation education space, women are often receptive to their involvement.
Akarsh Tekriwal, the 28-year-old founder of Safecup, a sustainable menstrual cup aimed at urban Indians, recalls the first time he conducted awareness sessions on sustainable menstruation in April 2019.
“(I) asked them if they would be comfortable with me talking to them or should I ask a female team member to take over,” he said.
But the crowd of 50 women at a corporate firm asked him to continue. “I realized the mind block was in my head and not much in theirs and why we need these open conversations involving both genders,” he said.
But it’s not always easy.
During Bangera’s informal awareness sessions, the husbands and fathers of women involved sometimes hovered around. “One of them shouted at me for speaking to the women about these things,” he said. “But eventually (they) did come to watch our programs from the side lines.”
Women, too, haven’t always been receptive. “I did find it odd initially that a man was talking to me about periods,” said Sadhana, a 35-year-old mother-of-four, who declined to give her surname.
Bangera’s team visited Sadhana’s tribal village in Sanjay Gandhi National Park near Mumbai.
“I have seen the impact it has had on the women here and even some men,” she said, explaining that in the past women didn’t want to spoil good cloth for use during their periods, but now they realize that not doing so can lead to infections.

The patriarchy in India

Getting men involved in menstrual health education is generally a good thing — but it also exposes how Indian patriarchal society can be.
Swati Bedekar’s engineer husband, Shyam Bedekar, developed the Vatsalya Foundation’s organic sanitary pad-making machine.
But while Bedekar has been been at the forefront of the Vatsalya Foundation, giving talks in villages across Gujarat, she said her husband’s involvement had helped them to make a deeper impact than she could have alone.
“A woman’s word against the unhygienic and superstitious practices of periods is not enough in creating an impact in some cases due to (patriarchy),” Bedekar said. “The reality is, in a patriarchal rural setting, sometimes when he asks a family to let a woman rest during a painful period, they may be more likely to listen to him than me.”
“This definitely speaks of the deep-rooted sexism that’s prevalent in our society,” she said. “But that is how it is.
Over the past 10 years, Bedekar has seen attitudes change in rural areas, with more people now accepting that periods are not an impure inconvenience, but a biological issue that requires a safe solution.
A decade ago, she saw elderly women refuse to let their daughters-in-law work in a pad-making unit. Now, there are men in Vadodara, where she is based, who help their wives make the pads when they get home from work, by attaching the adhesive strips and packaging them up, she said.
In the slum in Banjara Basti, some women have begun to change their habits.
“When these people, even the men, came and spoke to us, I figured there was nothing dirty about this,” said 16-year-old Nisha Jayram Rathod.
“Gradually I have been able to convince my parents too. Now even if I cook during my periods, everyone eats at home. That’s the big change that I also tell my friends about.”
Aarti Shiva, 20, now wraps her soiled sanitary napkins in a sheet of old newspaper and trashes them as responsibly as she can, rather than shoving them out the window.
She also doesn’t feel awkward now about asking her brother — who saw talks at the slum — to get her pads when she’s menstruating, a huge step in a community where many menstruating women have long been told not to go near men.
“There’s nothing to be ashamed of about menstruation,” she said. “It’s a gift from God.”