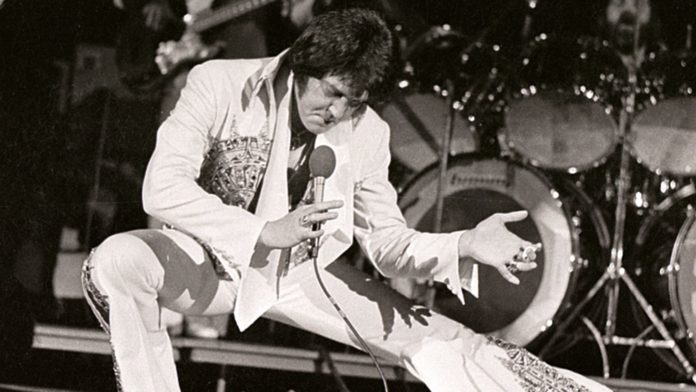 Elvis Presley’s rhinestone-studded jockstrap and a lock of Marilyn Monroe’s hair from the night she sang “Happy Birthday Mr President” are among a host of celebrity memorabilia up for sale.

One lucky Elvis fan – who has a spare £30,000 – could be the owner of the jockstrap which was made for him by a fan and later ended up in the collection of Jimmy Velvet, a singer who opened an Elvis museum in Memphis.

The king is believed to have worn the glitzy piece, complete with his initials, several times in the 1970s.

“It is extravagant. It is absurd. It is absolutely Elvis,” said Daniel Wade, manager of Paul Fraser Collectibles in Bristol which is selling the jockstrap as part of an unusual celebrity memorabilia sale.

While the jockstrap may be the most racy piece in the sale, the most expensive is a lock of Marilyn Monroe’s hair saved by her hairdresser who cut it from her head in 1962 on the night she sang “Happy Birthday Mr President” to John F Kennedy.

At £250,000, the lock of hair is fairly pricey, but Mr Wade said the coronavirus lockdown has only increased people’s interest in celebrity memorabilia.

An unpublished and illustrated horoscope document by Harry Potter author JK Rowling was in the collection but has already been sold for £17,500.

With more time on their hands people are seeking out alternative interests, but Mr Wade said they are also seeking different investments as the financial markets continue to dive.

“A lot more people are approaching us, particularly with a view to investing.

“Also, people have more free time. So we are seeing more collectors, just pure collectors coming to us and buying items.

“But we are seeing more people coming to us with a view to sort of hedging the diversification for their portfolios.”

But if fans are going to be parting with that much money for a lock of hair, they are going to want to know if it truly is Monroe’s.

Mr Wade said: “It’s all about checking the authenticity about the provenance. Can you can you plot a line of ownership from it being snipped by the barber to today?

“You can’t, then we are not interested in it. We only sell items we are 100% confident in.”

Monroe memorabilia has a history of attracting the big bucks, with the white dress worn by the actress in The Seven Year Itch selling for £4.5 million in 2011, making it the most valuable dress ever sold, while the dress she wore during her performance of Happy Birthday Mr President sold for £3.85m in 2016.

Evans on a roll in Monte Carlo as he books Djokovic...