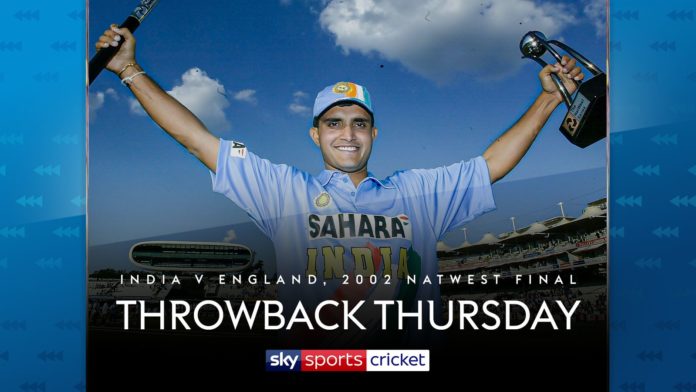 “Every time I go to India since, that’s the game they want to talk about.”

Sky Sports’ Nasser Hussain struggles to escape the memory of his England side’s defeat to India in the 2002 NatWest Final at Lord’s, but he’s not the only one to still wonder ‘what if’ 18 years on.

In the latest edition of Throwback Thursday, our weekly cricket feature which looks back on some memorable feats of years gone by, David Currie recalls his first ever experience of watching England live…

It’s ‘the one that got away’, Hussain said recently, and you can see why.

England posted an imposing-looking score of 325-5 from their 50 overs, batting first – Hussain himself memorably notching his first (and only) ODI hundred – and then proceeded to reduce India to 146-5 in reply.

Hussain’s charges would go on to lose by two wickets, with three balls to spare.

“You ask me now what I still think about on the treadmill; I’ve got India in a final 146-5, chasing 326 – we’ve got [Sourav] Ganguly, [Virender] Sehwag, [Rahul] Dravid, and [Sachin] Tendulkar out – that’s when you’re thinking, what could I have done differently?” Hussain recalled on The One That Got Away podcast, which you can listen to in the player below.

But Nasser isn’t the only one still perplexed by the outcome on that sweltering summer’s day at Lord’s 18 years ago.

It was my first ever game of cricket, live. Well, watching England at least. The records will show there may have been a trip or two to Hove prior, to see Sussex in action and Robin Martin-Jenkins ambling in off 10 paces.

What a first game to go to. A Lord’s final, the home of cricket, with over 650 total runs scored, and the atmosphere: the noise was absolutely deafening!

“There were just thousands of Indian fans coming in, all decked in their flags,” added Hussain “It was almost like an India-Pakistan game.”

That is my memory too of my surroundings. India fans, flags and colours everywhere, many also carrying plastic horns with them which they weren’t shy of blowing.

I revelled in the silencing of that Indian support by the mid-point of the game as Hussain and England racked up the runs on a dream batting deck.

Marcus Trescothick first reached a century, before Hussain brought up his with his now infamous ‘No 3’ celebration to the commentary box. Though, I must confess, I remember little of the captain’s outburst at the time.

“For about a year, [Bob] Willis, [Ian] Botham and [Jonathan] Agnew on the radio had been going on, saying, ‘Hussain shouldn’t be batting at No 3, he’s rubbish at white-ball cricket’. It did wind me up.”

It’s likely that it didn’t dawn on me the importance of his remonstrations at a younger age, particularly without the help of the commentators to which he was making his point talking me through it.

But what Hussain and I both knew, was the importance of his hundred and England’s score.

England have posted a score of 300 plus in a grand total of 78 one-day internationals of the 746 they’ve played and, staggeringly, 68 have come in the 18 years since that fateful day at Lord’s – just as remarkably, 44 of those have been scored by Eoin Morgan’s World Cup winners in their remarkable four-year turnaround since 2015.

But, at the time of Hussain’s dismissal for 115 in the 48th over back in July, 2002, he’d guided England to just their 10th ever total over 300 and their fourth-highest at the time. England had lost only one of those previous nine games.

“In those days, [325] that was a seriously good score! But we knew it was a very flat pitch and they had this ‘Fab Five’,” recalled Hussain.

Immediately two of those five got India off to a flier. India captain Ganguly blasted a 35-ball fifty as he and the equally-aggressive Virender Sehwag shared a century opening stand in just 13.1 overs, crucially getting them well ahead of the required rate.

I’d not seen hitting like it. Nor, seemingly, had the rest of the now quietened, nervous home support which had swiftly and simply been silenced again by Indian horns and cheers to greet every run.

But the game had another twist.

Alex Tudor first bowled Ganguly, who attempted one almighty swing too many, Sehwag too was castled when attempting to cut an Ashley Giles delivery too close to his off stump, while Ronnie Irani then did for Dinesh Mongia and Dravid in quick succession.

But, left from India’s ‘Fab Five’, was still the best of the bunch, Tendulkar. And though his greatness may have been a little lost of a near cricket novice like me at the time, the Indian fan sitting to the left of me and my dad soon put it into context.

“I’ve flown all the way from Mumbai for this game, just to watch Tendulkar bat,” he said, or words to that effect.

With a full 24 overs of the game left to go, he was heading home. Literally. With the fall of Tendulkar’s wicket for 14, bowled by Giles, my neighbour had decided it was game over, said his goodbyes and left.

With the benefit of hindsight, it’s a foolish decision at best but, at the time, it was a reasonable assumption to reach, with two relative novices tasked with turning the game around for India.

Mohammad Kaif, who had made his debut earlier that year, was playing in just his 18th ODI, while even Yuvraj Singh, who had a bit more meat on the bones, had only five fifties to show from his previous 39 appearances.

The pair quickly made themselves known. Having linked up at the start of the 25th over, they brought up a fifty partnership in the 33rd, and then raced through to a century stand in the 39th, smearing an increasingly-ragged England attack all round Lord’s.

“It is the greatest innings that lad [Kaif] played. He will always be remembered for that,” Hussain added.

“I remember him coming in and there being a bit of sledge: someone saying, ‘who’s this then skip?’ And I said something like ‘I think he must drive the bus; he drives Tendulkar around’.”

.@nassercricket, thanks to that innings the bus driver drives a convertible now 🙂 @skycricket https://t.co/2nnFyNhkhn

Paul Collingwood ultimately accounted for Yuvraj, in the 42nd over for 69, but Kaif carried on, finishing unbeaten on 87, ‘the bus driver’ steering his team to a remarkable victory – and prompting some shirtless celebrations by Ganguly on the Indian balcony – in the final over.

“Then you are completely blank,” reflected Hussain. “You’re in a zone, but a very bad zone. You’re in an immediate place of ‘how did we lose that game?'”

Blank, I made my way home, asking myself that very same question.