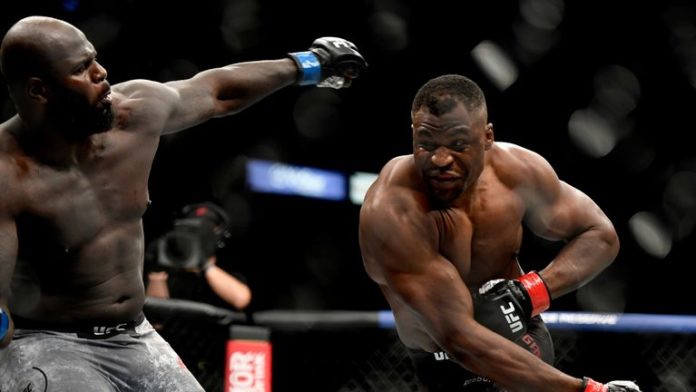 “I told Ngannou after the spar: ‘You can [come to boxing] no problem, this is easy for you'”

UFC heavyweight Francis Ngannou and Joe Joyce shared eight rounds of vicious sparring in Las Vegas to make “the hairs on the back of the neck stand up”.

Ngannou and Dillian Whyte have traded challenges and both men have offered to crossover into each other’s sports, but the UFC star’s mettle has already been tested inside the boxing ring by Joyce.

“Let me tell you something about Ngannou – he can box at a high level,” Joyce’s manager Sam Jones told Sky Sports.

Joyce was training in Vegas earlier this year to face fellow undefeated Brit Daniel Dubois when he crossed paths with Ngannou, who was readying himself for a UFC fight which he eventually won by knockout in just 20 seconds.

“We were going to spar inside the cage – we had no problem doing that, as long as it was just boxing,” Jones said. “But he said no, and he came to our gym in Vegas.

“Ngannou was standing in a weird stance. Then just stood upright and started throwing huge bombs at Joe’s head!

“It took Joe a round to work him out.

“Ngannou and Joe went eight rounds of holding their feet. It was the most entertaining spar I’ve ever seen Joe in.

“The hairs on the back of the neck stood up.”

France-based Ngannou has smashed his most recent four opponents inside less than three minutes combined then told Sky Sports: “I am always confident in my power. I have no doubts with my power.”

“Joe, when he spars, likes to work with the other guy but Ngannou was in no mood for a technical spar. He was there to put leather on Joe’s face.

“Joe looked at me and [his trainer] Ismael Salas as if to say: ‘Let’s have it, then!’

“They went to war. They traded right hands for fun. Ngannou was throwing his right hand from his boots!

“Ngannou has a great chin. Everybody knows Joe does too.

“I told Ngannou after the spar: ‘You can [come to boxing] no problem, this is easy for you’.

“Ngannou is one of the strongest men you will ever see in any combat sport.”

Ngannou has since told Sky Sports about Whyte: “If he wants to fight MMA we will find out.”

Whyte has shot back about Ngannou’s boxing claims: “Let’s get it on and stop talking about it. Don’t talk about it, let’s just do it.”

“It’s really got a lot of momentum and a lot of promise. I think there’s a really good chance it could happen.”

Joyce’s manager Jones said: “The first person Ngannou should fight in boxing is Joe Joyce because of how entertaining their spar was. They just absolutely went at each other and Ngannou will take confidence from it, too.

“Ngannou and Joe would be one of the most entertaining fights inside the professional ring.

“What would be fun? One time in the octagon and one time in boxing. We’d be prepared to do that.

“Joyce has aspirations of going into the UFC after boxing. He used to do martial arts. It’s something he wants to do.”