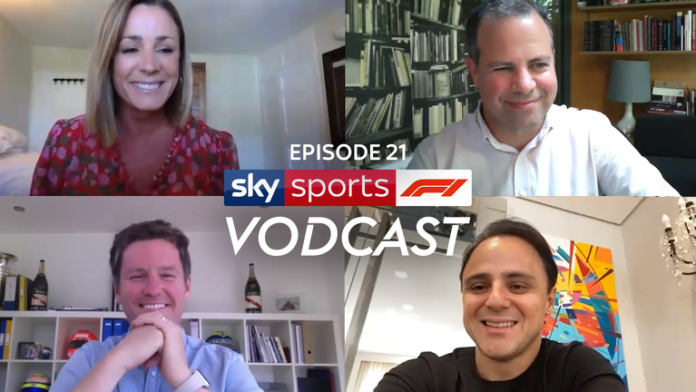 A “religion”. A “national institution”. A name and brand that is synonymous with Formula 1.

But what makes Ferrari, the oldest and most successful team in the sport’s history, so different from their rivals? And why are the Scuderia, and their drivers, always under “massive pressure”?

On a special edition of the Sky F1 Vodcast, icons Felipe Massa, Rob Smedley and Stefano Domenicali joined us to share memories of their time in red, opinions on the team’s latest moves, and more pertinently to explain why being a part of Ferrari is the pinnacle.

You can watch the full Vodcast by clicking play on the video above.

“Driving for Ferrari is completely different,” said Massa, who drove for the team from 2006 to 2013 and so nearly clinched a championship for them in an unforgettable 2008 title decider.

“Not in the way you work, the way of working is similar in whatever team you go – especially in the top teams. But it’s different because it’s like a religion.”

Ferrari has often been described as a motoring religion, both because of the fandom, and the history and success the famous team has enjoyed.

But as our guests explained, that also leads to a lot of pressure…

‘Massive pressure’ at Ferrari: The factors

How much pressure the drivers, management, and staff have to face at Ferrari is another sentence F1 fans will have seen a lot over the years.

Particularly with champions such as Fernando Alonso and Sebastian Vettel unable to bring the glory days back to Maranello, with Ferrari now without a title in over a decade.

Smedley, who worked for the Italian team over 10 seasons and was Massa’s popular race engineer, stated that a lot of that pressure comes from within.

“First of all, it’s the standard,” Smedley, who joined the team at the end of the record-breaking Michael Schumacher era, explained.

“It’s not a team where you get a point, a third place, and it’s seen as a success. It’s winning races, and it’s winning world championships. That’s the measure of success, and it should be for a team of that size. That builds the pressure.

“Even when you’re winning, you’ve still got that pressure. In 2004 we probably had the best Formula 1 car ever, but if we weren’t one-two on the Sunday we would get back at 9am on the Monday morning for the debrief and there was a sense that we failed.”

The Englishman continued: “Then there’s also the fact that it’s a national institution.

“There’s no football team in Italy, or anywhere in the world, that is seen that way, and there’s no F1 teams like that in the UK either. In Ferrari, it’s an absolute national institution, it’s a religion.”

Massa also admitted that the media play their part.

“If you’re winning there’s a massive pressure because you need to keep winning, keep showing and giving the results. But if you’re not, there’s massive pressure there and the media invent a lot of things as well, things that are just not happening.

“The team has more pressure than all of the other teams because, for whatever reason, the media is always participating more.

“And not only the media, the fans, are really expecting a lot.”

Why Ferrari are ‘so special’

With 238 race wins, 16 constructors’ titles and 15 drivers’ championships, Ferrari is always going to be high on the list for F1’s star drivers when they consider their next moves.

And that’s the case even when the team are struggling.

“Everything is different in a good way, bad way, and a difficult way… but it’s so special, really special to be part of that team,” said Massa, who finished his F1 career at Williams.

“After your time passes at Ferrari, you may drive for another team, but you’re always a Ferrari driver. That’s something that doesn’t happen for another team. You get inside the blood, and it’s different.”

Even the pressure can be seen as a positive, too, according to Smedley:

“It is a huge amount of pressure. But you just to learn to live with it.

“I never really saw it as a downside, a lot of the time I found that I could really thrive on that pressure.

“Those of us that have withstood the test of time at Ferrari, Ferrari will always be part of your heart.”