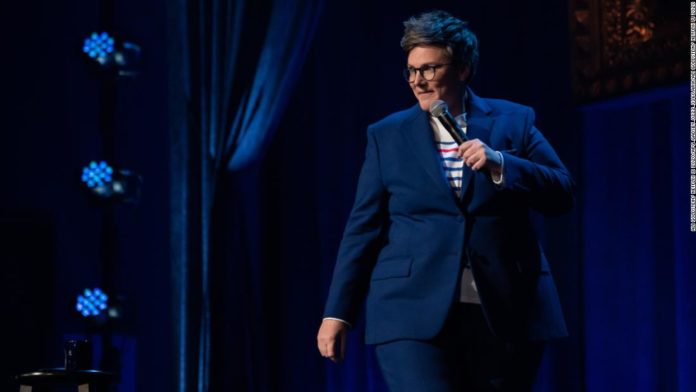 The Australian comic begins by essentially recapping the phenomenon that was “Nanette” — a searing, deeply personal introduction to her life experience — joking about the wisdom, with the benefit of hindsight, of having exhausted all that self-revelatory material and trauma in one great big burst.
She then proceeds, teasingly, to outline precisely where the latest show will go, and how various portions of it will impact the audience. Like “Nanette,” she’s adding another level to the comedy by letting the listener in on her carefully constructed blueprint, almost like a special-effects artist inviting you into her workshop.
It’s audacious, or at least would be, if it didn’t feel like a bit of a reprise of her previous work. And while there are some very funny bits, clever observations and yes, personal information strewn along the way, perhaps inevitably nothing lands with quite the raw intensity of her debut.
In “Nanette,” which rippled through the Netflix universe by word of mouth, Gadsby served notice that her intent was to confront the audience with her story. If that made you uncomfortable, the message went, take a look in the mirror.
Here, the anticipation of a deeper level of resonance than the average stand-up special is baked into Gadsby’s act. And that’s a high bar to clear.
The appreciative audience, notably, doesn’t appear particularly concerned. From that perspective, “Douglas” certainly isn’t disappointing, but the telegraphed targets — from the anti-vaccine crowd (“Polio is bad!”) to Louis C.K., specifically, to patriarchy and misogyny more broadly — don’t convey the same sense of risk.
Granted, the roster of comedians who can tackle topics with Gadsby’s barbed mix of social commentary and lacerating wit remains a small club, especially if it’s confined to current practitioners. And the unique nature of her voice, as a lesbian from down under who has powerfully addressed discrimination, goes well beyond just her thickly accented delivery.
During that aforementioned introduction, Gadsby takes on her critics, including those who, she says, derided “Nanette” as a “glorified TED talk.”
“Douglas” might be a lot of things, but it’s certainly not that. Yet nor is it the singular experience that “Nanette” provided, demonstrating that the most daunting challenge any performer faces after an artistic and commercial breakthrough is what to do for an encore.
“Hannah Gadsby: Douglas” premieres May 26 on Netflix.