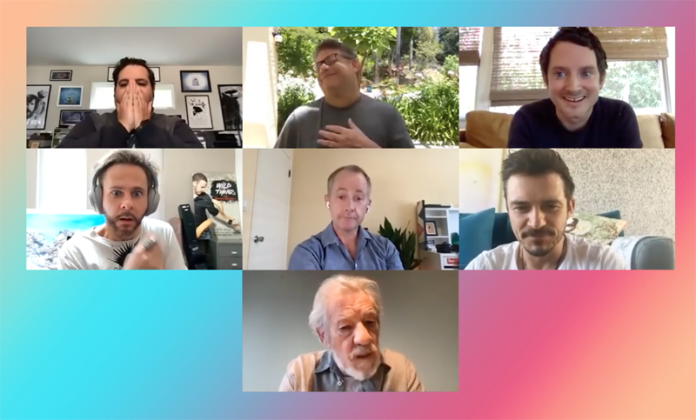 After bringing back the casts of Back to the Future, The Goonies and Splash for his quarantine-shot show, Josh Gad (Frozen) is reuniting the cast of Peter Jackson’s Lord of the Rings trilogy for a new episode of Reunited Apart, set to air this Sunday! The announcement teaser can be viewed in the player below!

Not only does it mark another new episode for Gad’s hit series, it also marks the second reunion star Sean Astin has appeared in after The Goonies episode. Other stars set to return for the latest episode include Elijah Wood (Come to Daddy), Dominic Monaghan (Star Wars: The Rise of Skywalker), Billy Boyd (Hollywood), Orlando Bloom (Carnival Row), Ian McKellan (Cats), Viggo Mortensen (Green Book), Andy Serkis (War for the Planet of the Apes), Sean Bean (Game of Thrones) and Karl Urban (The Boys), amongst others.

Jackson’s trilogy, focused on the main three novels in J.R.R. Tolkien’s acclaimed franchise, were shot simultaneously in New Zealand from October 1999 to December 2000, widely considered one of the biggest and most ambitious projects ever undertaken with a mammoth combined budget of $281 million. The gamble paid off as it became one of the highest-grossing film series of all time with over $2.891 billion earned globally, as well as winning 17 out of its 30 Oscar nominations.

Hosted by Gad, every episode of Reunited Apart will showcase one of the many incredible charities working to provide resources to those most desperate for them during these incredibly difficult times.

RELATED: Back to the Future Cast & Creators Reunite on Reunited Apart with Josh Gad

Reunited Apart with Josh Gad is directed by James Merryman who co-produces along with Meghan Monaco. The web series is executive produced by Taylor Stuewe and edited by Will Newell. The theme song is sung by Kate Anderson who co-created the theme song along with Elyssa Samsel. Opening credits are by Ryan Kravetz.