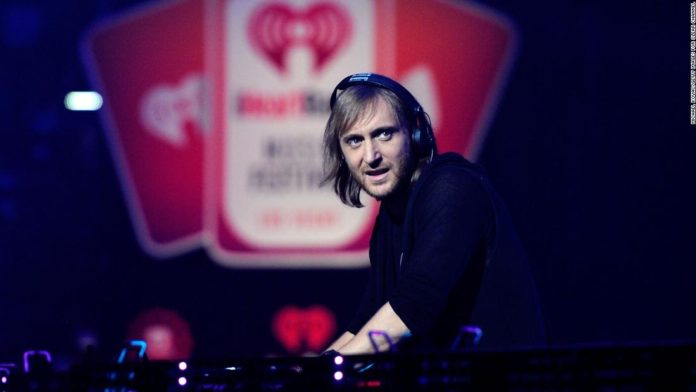 The internationally known deejay will be spinning his classic hits Saturday evening from an iconic New York City rooftop, all in an effort to raise money for coronavirus relief charities.
“Since the beginning of [the pandemic] I was looking for an idea on how to give back,” Guetta told CNN in an interview on Wednesday. “I didn’t want to do something in my bedroom … I wanted to have people in front of me. I’m going to give people the possibility to interact with me on Zoom. I’m going to have multiple screens because i like the idsea of playing for people that I can see.”
The event, United At Home, will be live streamed on all of Guetta’s social channels at 7 p.m. The location will remain a secret for fans until the event begins, but Guetta says it’s “going to be very special.”
It’s the second rooftop concert Guetta has hosted to raise money for coronavirus relief efforts. The first was in Miami last month and raised $750,000 for Feeding South Florida, Feeding America, World Health Organization and Fondation Hôpitaux de Paris.
Fans can expect to hear his classics during the nearly two-hour set and even some new music.
“This morning I started a very special remix that is a song about New York City to open the show,” Guetta said. “I think it’s going to be very special. I’m really trying to make the show unique. Even my hits like ‘I Got A Feeling,’ ‘Sexy Chick,’ ‘Titanium,’ I’m trying to make versions that people cannot hear when they listen to the radio.”
Guetta is encouraging his fans to find their own ways to give back during this time.
“It’s crazy to see with how little money you can do so much,” he added. “That’s what I want to say to people if they can help, it doesn’t have to be $10,000. With $1 I think [Feeding America] managed to give like ten meals.”
Guetta says people need music now more than ever.
“All I can do is try to help … It’s obviously a very hard time for everyone. We are going to get through this all together. This is really a moment that shows how the world needs to be united and that’s always what I’ve been trying to do with my music, to bring people together … we are all the same in front of this disease.”