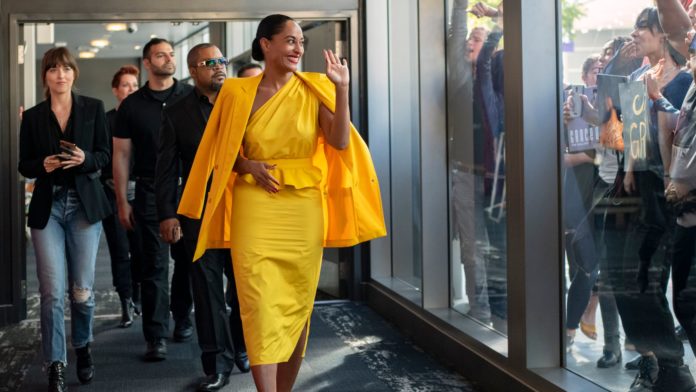 The interviews for her latest film The High Note are taking place over Zoom, rather than in a typical hotel room set-up, and the movie won’t have the cinema release it was due to, let alone a glitzy premiere.

Speaking to Sky News’ entertainment podcast Backstage the star admits she had mixed feelings about the press “tour” during the coronavirus lockdown.

“But then there’s another part that’s like, I have found so much relief in watching movies and shows and just completely disappearing into books and movies and music, and if I can offer that to somebody else at this time, then I will do that, and I’m happy to be here and give that.

As the child of celebrities (her parents are Don Johnson and Melanie Griffith) it seems unlikely Johnson would relate to the struggles faced by someone desperate for a leg-up in the industry, but she’s great in her role as Maggie – a personal assistant to an ultra-famous musician.

The character wants to be a producer and unlike some of the PAs we’ve seen portrayed on screen before, she’s happy to push back and fight for her dreams.

Johnson says she thinks that side to Maggie is “one of the most important”.

“I think that’s where she really is herself and has a lot of self-respect and drive, and the thing that I loved about Maggie… when she is being treated unfairly, she doesn’t hold it against the person, but she also doesn’t take it personally.

“I found that really powerful and graceful, and I really love that aspect of her, coupled with her pretty remarkable ambition and talent.”

Ambition and talent are also in Johnson’s wheelhouse – she’s pivoted her career following her leading role in the Fifty Shades trilogy, selecting parts in smaller movies such as last year’s The Peanut Butter Falcon, which went on to become the highest grossing independent film of the year.

She also recently turned her hand to directing, starting with the music video for Coldplay’s Cry, Cry Cry.

Her relationship with singer Chris Martin may have helped with that project, but the actress is keen to do more behind the camera.

“I love making music videos,” she says. “For now, I think that that’s something that I’ll do, you know, when it comes up. I have a lot to learn.

“I mean, definitely if the opportunity arises, but I don’t think I’ll be making a feature anytime soon.”

In The High Note, her boss, played by Tracee Ellis Ross – another actress with famous parentage – is prone to the odd outrageous request.

When I ask what her own biggest diva demand has been, Johnson seems initially reluctant to answer the question.

“Well, I think that it depends on how you perceive the word diva,” she begins. “But I don’t know, I don’t really have that kind of a complex.”

But then she seems to change tack, exposing a slightly surprising, very dry, sense of humour.

“I mean, I like rooms to be freshly painted whenever I walk into them, and I only like to have pink fruit in the room, and I only want to work with people named Xander,” she quips.

“But other than those things – oh, and no person can speak to me with their eyes open – but other than that, I don’t really have any diva-ish requests.”

The High Note is available to rent from today