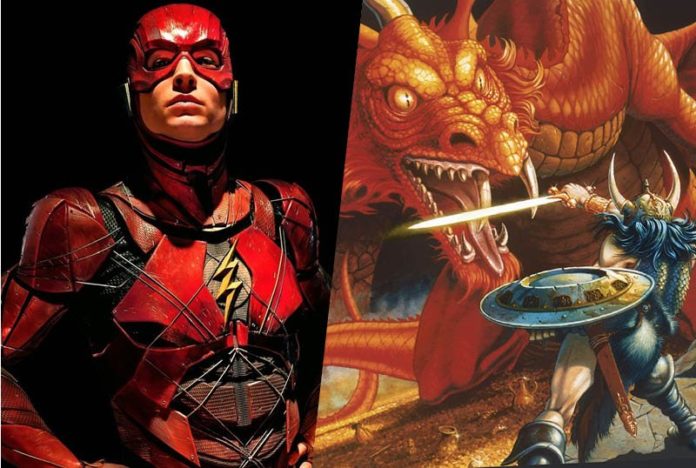 Jonathan Goldstein and John Francis Daley have been a powerful collaborative duo for nearly 15 years and in a new interview with The Hollywood Reporter, the duo have opened up about their DC Extended Universe Flash movie that never came to fruition and the upcoming Dungeons & Dragons adaptation at Paramount Pictures.

The duo were just prepping to head to the United Kingdom and start scouting their locations for their adaptation of the iconic tabletop board game, having also just begun working on a second draft of the script for the project, when the global pandemic caused mandatory shutdowns, but did not that Paramount and eOne are “cautiously optimistic” that they will be able to “get the ball rolling” in a safe way soon. Some of the new methods they are looking into to keep things safe as the world changes is gathering of public masses, as they have crafted moments that feature a large number of them.

“We have these scenes with big crowds that we are now rethinking and deciding if it’s worth preserving or if we should try to pivot and find another way into the scenes we were imagining,” Daley explained. “We have turned in our second draft of the movie and are doing prep with storyboarding and visualizing sequences. That’s stuff we can do from our homes as well.”

The two are best known for their work in the field of comedy, having co-written the well-received 2011 ensemble Horrible Bosses and helping craft the scripts for Cloudy with a Chance of Meatballs 2 and Spider-Man: Homecoming. In looking at the evolution of their career and the infusion of their brand of humor into more action-based fare, they feel like Dungeons & Dragons is a good outlet for them, with Goldstein noting they really want to make sure the movie is “fun.”

“It’s not an out and out comedy, but it is an action-fantasy movie with a lot of comedic elements and characters we hope people will really get into and enjoy watching their adventures,” Goldstein said.

“D&D is such a unique look at the fantasy genre where it is contemporary in terms of the people playing it and the way they speak to each other,” Daley continued. “So we never wanted to spoof the genre of fantasy or take the piss out of it. But we did want to find another way into it that we hadn’t necessarily seen before. Just the format of Dungeons & Dragons is so interesting and fun and all about critical thinking and thinking on your feet and figuring out ways to make things work after they fall flat. There’s a lot of the spirit of that that we’re trying to inject into the movie itself.”

One of the pre-production processes the creative duo still have to work through is casting the film, which Goldstein imagines will have to now take place over video calls rather than being in the room with a performer, which Daley finds to be “one of the downsides of all of this.”

“So much of casting is feeling the electricity in the room, especially when you are doing a chemistry read between people,” Daley described. “But we’ve been told by our casting department at Paramount that they’ve already done chemistry reads like this, where people would be Skyping in from Australia and said that it works really well, as long as the connection is [good]. It’s brand new territory to figure out, and hopefully it will garner the same results that a normal casting session would.”

Prior to signing on to Dungeons & Dragons, the two were working on a solo Flash film for the DCEU before exiting over reported creative differences, and in looking back at developing that project, they found they learned a few lessons in the kind of storytelling for large budget projects.

“The challenge is to approach it as you would a much smaller movie, and not get caught up in the fact that you have $100 million-plus to spend and start thinking about the biggest set pieces you can construct,” Goldstein said. “Rather, focus on the stuff that makes it special and makes an audience invest — and that’s the characters. That’s in the stuff you don’t need a lot of money to do right. That’s how we approached The Flash and that’s how we’re approaching D&D.“

“It’s how we approached Spider-Man, too,” Daley noted. “Our favorite scene that we wrote in the movie was the scene in the car where Michael Keaton is driving Tom Holland to the dance. It was probably the least visual spectacle of that whole film.”

It was previously reported that Goosebumps director Rob Lettermen would helm the Dungeons & Dragons movie way back in 2016, but that film never materialized and the project has gone through various iterations including one with Lego Batman director Chris McKay.

Role-playing game Dungeons & Dragons first became popular in 1974, and since then has amassed millions of players and fans worldwide. The hugely popular property has also influenced numerous writers, directors, game designers and other creative professionals throughout its four decades. The feature was first announced in 2013 wherein a rights-dispute began between the studio and Hasbro (parent company of publisher Wizards of the Coast), but the issues were resolved last year and the film remains in-development.

First adapted for the small screen as an animated television series in 1983, Gary Gygax and Dave Arneson’s iconic RPG was turned into a live-action feature film in 2000 directed by Courtney Solomon. The film was neither a critical nor financial success, but it did lead to a telefilm sequel with 2005’s Dungeons & Dragons: Wrath of the Dragon God and a direct-to-DVD followup with Dungeons & Dragons: The Book of Vile Darkness in 2012.