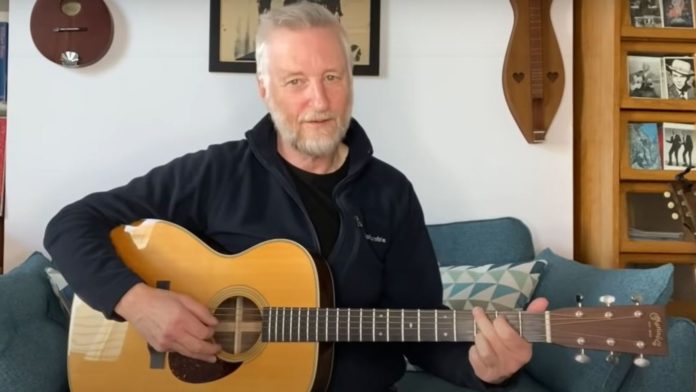 Singer-songwriter and activist Billy Bragg has praised Taylor Swift for standing up for artists’ rights and against sexism in the music industry, telling Sky News the star is something of a “kindred spirit”.

The pair struck up a friendship after presenting a prize together at the NME Awards in February, and Bragg, 62, says he has since watched her Miss Americana documentary and has a lot of respect for the singer.

He chose the 30-year-old’s song Only The Young as one of his five options for Covers For Others, a charity initiative in aid of the RCN (Royal College of Nursing) Foundation COVID-19 Support Fund, which sees fans donating to vote for a track they would like to see reinvented.

I don’t know who was more surprised to learn that we were co-presenting an award at the NME Awards last night, me or @taylorswift13 I have a lot of respect for her and the stand she has taken on equality and artist’s rights. Needless to say we got on like a house on fire. pic.twitter.com/eVaeI5kKbi

Artists including Declan McKenna, Lapsley, Frank Turner and Lauran Hibberd have taken part so far, and Bragg is now set to play Swift’s song after fans chose it over his other selected tracks.

Bragg says learning a Swift song for the cause, which has raised more than £13,000 in total so far, “is no bad thing”.

While the British folk and protest icon might seem worlds away from the global superstar, Bragg says they “got on like a house on fire” at the awards and have more in common than people might think.

“I have a lot of respect for her, trying to stand up as an independent woman in the music industry,” he tells Sky News.

“Not just because of the amount of sexism and misogyny in our industry, but also because she is trying to keep hold of her own catalogue, which is a really important thing to do.”

He adds: “Unfortunately, you know, it is still, sadly, a sexist, racist industry. And for someone like Taylor Swift to stand up and make that point, I think it’s very powerful.”

Swift has been involved in a public dispute with music mogul Scooter Braun, who bought the rights to the singer’s first six albums in 2019, through a private equity deal reportedly worth around $300m (£222m).

“[Taylor’s] tried to go back and get her rights back,” says Bragg. “Watching the Miss Americana documentary, I realised that she was quite a kindred spirit.

“I do it on a small scale, but she does it on a huge scale. And that’s what she said to me, she said ‘I really respect what you do about politics’. And I went, ‘it’s much harder for you. The fact that you take a stand, you know, it has much bigger implications. Everyone expects me to do it… but from you it makes a lot more of a difference’.

“So it was really, really nice to meet her. And [Only The Young] is a cool song as well.”

Like many artists, the coronavirus lockdown has meant Bragg has had to cancel tour shows; at the minute, he should be in New Zealand playing to fans there.

“That’s gone, as has the rest of the summer,” he says. “Glastonbury, which I play a large part in, takes up a lot of my summer, I run a stage there called Left Field. That’s all disappeared, as have the other festivals.”

He says he doesn’t expect to return to gigging until next year.

“I doubt really now I’ll do a gig this year. Particularly my audience who are around my age – I mean, I’m 62 now – so, you know, people around my age in a room with 500 other people, it’s gonna be a while before they have the confidence to do that.

“I think sport will have to come back before music comes back, and people can see that large crowds gathering together, it’s okay. So we’re gonna have to wait a while.”

However, despite fears for the industry due to the prolonged closures of venues, Bragg remains optimistic and says people will always want live music.

“I think one of the things that seems to have been revealed since the digitisation of music is that despite music being cheap as chips, now you can get it for nothing online, people still want to go to gigs,” he says.

“There’s something you can get at a concert that you can’t get off your phone or off your iPad.

“It’s a sense of being part of something bigger than yourself. We need that, it’s why people go to church, it’s why they go and watch sport. They need to have that sense of… I suppose it’s a form of emotional solidarity.

“You can’t get that online. So I think people will want to come back to gigs.”

He is also getting used to performing from his home in West Dorset.

“The secret is to dress the room, or the background, so it looks like a stage,” he says. “Because when you’re looking at the camera, which is often your iPhone back to front, you know, you can see you’re in your living room. It kind of destroys your sense of what you’re doing.

“If you’ve got a backdrop, you can see that you’re doing a gig so you’re kind of much more in the moment. [It’s] getting yourself in that gig headspace.

“It is a bit weird, when you finish a song and it’s just silence… but I don’t know, maybe at the end of this, people will be kind of into online gigs and we’ll do them more often. It’ll be something else that we do on top of touring.

“We may have discovered a new way to connect with people. It’s interesting. I don’t think it’s something I would’ve gone and done anyway, it would have seemed a bit artificial. But in the situation we’ve found ourselves in for the past couple of months, it’s made a lot of sense.”

Bragg says he has been heartened by the renewed sense of community brought about by the crisis.

“They’re absolutely crucial to us being able to do what we want to do. And so I’m hoping that we won’t just suddenly snap back to how it was before, where we were all just looking at our phones all the time and not thinking about each other.”

Unsurprisingly, he has not been impressed by the government’s handling of the pandemic – Dominic Cummings‘s trip to Durham in particular.

“When a figure at the absolute centre of our response to coronavirus doesn’t do the right thing, thinks that the rules don’t apply to him, it undermines public trust.

“Trust is very, very hard to build and it’s so easy to lose. And I fear this government has lost the trust of the public for its handling of this.

“People talk about freedom and how important freedom is, but not all kinds of freedom are positive. There is a dangerous kind of freedom, and that is impunity. And I’m afraid our prime minister’s acted with impunity all his life.

“He’s never really been held accountable for anything in his private life, his public life or his professional life. And Dominic Cummings is cut from the same cloth, I’m afraid.

“[Boris Johnson] doesn’t seem to have any grasp of what it takes to be a prime minister. It’s more than just standing on the doorstep of Number 10 and waving. You know, it’s about taking responsibility. And he’s never been able to do that.

“His entire career has been built on getting away with things. And up until now, that hasn’t been a life and death situation. But it is now.”