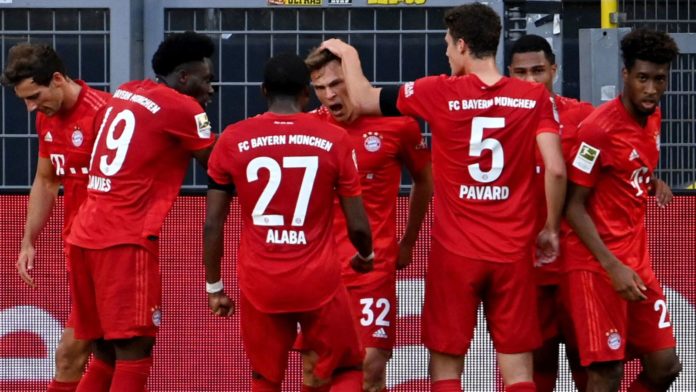 Follow live coverage of Bayern Munich vs Dusseldorf this Saturday; kick-off at 5.30pm

Alan McInally returns with his Bundesliga predictions ahead of Saturday’s action. Bayern’s lead at the top is now seven points – but can they maintain it?

Bayern Munich earned a 1-0 win at Dortmund on Tuesday thanks to a piece of brilliance from Joshua Kimmich. That ensured they lead the division by seven points with only six games left. Wolfsburg won emphatically at Bayer Leverkusen, arguably the shock of the round, while RB Leipzig were held by in-form Hertha Berlin.

Fortuna Dusseldorf came from behind to see off struggling Schalke, and Werder Bremen held Borussia Monchengladbach to a stalemate. Read on to find out who Alan McInally is backing in this weekend’s matches.

As the Dortmund vs Bayern game went on, the more the lack of a crowd affected it. Dortmund petered out a bit, and Bayern slipped back into second gear to cruise to the end of the game. It was a huge game and an even bigger result for Bayern – they deserved it.

There was a brilliant result for Fortuna Dusseldorf too after being a goal down to Schalke, closing the gap to Mainz to just one point. Uwe Rosler will be happy with that and his side are now six unbeaten, despite four of those being draws. Bayern will take the handbrake off and could play with a bit more freedom having gone seven points clear.

Since we have resumed after the break, there have been 24 games in the Bundesliga and only five home wins, but Bayern are a machine at the moment. I think Robert Lewandowski will have a field day in this too. Dusseldorf did well against Schalke but Bayern are a different proposition. If they can score five against Frankfurt, then who knows what the score could be here?

Bayern Munich are unbeaten in 14, winning 13 and drawing just one in that period. With four clean sheets from five, is their form set to continue against struggling Fortuna Dusseldorf? Only the 98 per cent of Super 6 players are backing a Bayern victory, with 74 per cent of those expecting Manuel Neuer to keep a clean sheet once again. Play here for free.

Borussia Dortmund will be hurting from the defeat to Bayern last time out. And they’re against a Paderborn who have scored one goal since the restart – they simply have nobody to put the ball in the net. They drew 0-0 at Augsburg in midweek, which was not a bad result, but scoreless draws will not get them out of trouble or give them what they need to survive. They will not stop Dortmund scoring either.

Even if Brandt and Haaland miss out, Dortmund still have Thorgan Hazard, Mario Gotze and Raphael Guerreiro at their disposal. The positives were that Axel Witsel and Emre Can came back into the fold against Bayern – Dortmund will have absolutely no problem against Paderborn and will score goals.

Dortmund find themselves seven points behind Bayern after defeat in Der Klassiker, yet a combined 59 per cent of Super 6 entrants are backing them to win either 2-0 or 3-0 at Paderborn, who sit at the foot of the table. What score will take your fancy, with £50k up for grabs? Play for free here.

Bayer Leverkusen were in the best form aside from Dortmund and Bayern heading into their match with Wolfsburg in midweek, with Kai Havertz flying too. But Wolfsburg were brilliant – they came out of the traps and Marin Pongracic grabbed two goals on their way to victory.

Frankfurt were in a six-goal thriller against Freiburg and finished really strongly, scoring two in the last 10 minutes to salvage a draw. Wolfsburg’s home form has been good – but does that make any difference now?

Wolfsburg won at Leverkusen and Augsburg, with Dortmund the only team to beat them since the break, and they do look as though they have goals in them. This is a tough one to call. Wolfsburg’s confidence will be high and both teams will score, but the home team will win it for me.

Only 32 (0.01 per cent) Super 6 competitors correctly predicted Wolfsburg’s 4-1 win at Bayer Leverkusen. They remain in the European places, with 87 per cent tipping them for the three points against a Frankfurt side who have not won since the break. Play here for free.

It was a good result for Werder Bremen against Borussia Monchengladbach, but they are still second bottom and five points behind Fortuna Dusseldorf – it was a blow for Werder that they beat Schalke on Wednesday.

Schalke have suffered three losses but are still in ninth. It was a good job their form was so good under David Wagner at the start of the season, otherwise they would have been staring down the barrel by now.

Werder Bremen are a huge team. They were one of the biggest teams in Germany when I was playing there, often the biggest opposition to Bayern. They needed the Leverkusen defeat to force themselves to become more organised and they certainly have thereafter, with an away win at Freiburg followed by a point against Gladbach. Gladbach could finish second and in the grand scheme of things, it was a good result.

Schalke look devoid of chances and fight at the minute. In the middle of the park, Weston McKennie grabbed a goal in midweek and is neat and tidy, but the fans demand more. Schalke should be pushing for fourth place.

Werder are in decent form and unless something drastic happens, I cannot see Schalke scoring or getting a result again, and it will be another away win in the Bundesliga. Schalke are comfortable in their league position, but three successive defeats in a region like Gelsenkirchen, where they adore football, is simply not good enough. If Schalke show the same amount of fight as Werder, it will still not be enough.

Schalke have lost three on the spin, scoring just once and conceding nine. Werder Bremen registered fine results against Freiburg and Borussia Monchengladbach, yet only 23 per cent of Super 6 players are backing them to steal all three points. Who will you side with? Play for free here.

Bruno Labbadia has done unbelievably, with Hertha recording two wins and a draw. He will have been a bit disappointed that they could not win at RB Leipzig, as he would have expected his team to go on and get the three points with Leipzig being down to 10 men.

Hertha are raising a few eyebrows and could be looking at seventh or eighth place. Labbadia has done a really good job thus far. They like the way he goes about things – he seems really aggressive. Hertha do like to get the ball in the box, and it works.

Augsburg are just above relegation and they have done OK, but they do not score a lot of goals. They were beaten in the last minute by Wolfsburg, they thumped Schalke which was unexpected but a great result, and then a 0-0 against Paderborn followed, and that tells you everything you need to know.

This should be a home win with the way Hertha are attacking and defending – Augsburg will not get the chances they got when they turned Schalke over. Augsburg will think they are safe but they have to do a bit more.

Super 6: Matheus to Cunha up some magic?

Hertha Berlin are unbeaten since the break, earning a 2-2 draw at RB Leipzig in their last fixture. Labbadia’s side now sit in 10th, just four points behind Hoffenheim in seventh, with 78 per cent of Super 6 competitors thinking that Hertha will continue their good run of form against Augsburg. What score will you predict, with £50k there for the taking? Play for free.

Mainz have played out two draws, aside from their 5-0 hammering at the hands of RB Leipzig.

Hoffenheim have a chance of catching Wolfsburg in sixth, but you also have Hertha Berlin, Schalke and Freiburg after those spots, so this is a big game for them.

Mainz are down there on 28 points – defensively they have been OK and can nick a goal, while trying to frustrate the opposition, yet Hoffenheim are better than the sides around them, so it is genuinely a hard game to call.

Mainz would bite your hand off for a point. They did have an extra man against Union Berlin and could not take advantage of that, but they will frustrate Hoffenheim. I would not be surprised if Hoffenheim won, but I think Mainz will grab a point and do everything and anything to make sure they do not lose the game.

Just under 20 per cent of Super 6 players are opting with Alan McInally’s prediction of 1-1 in this one, while a further 27 per cent are expecting Hoffenheim to edge it 2-1 and leave with three points. Where will you play your cards, with £50k to be won? Play for free, entries by 2:30pm.