Home World The case to extradite Huawei’s CFO from Canada to US can continue,... 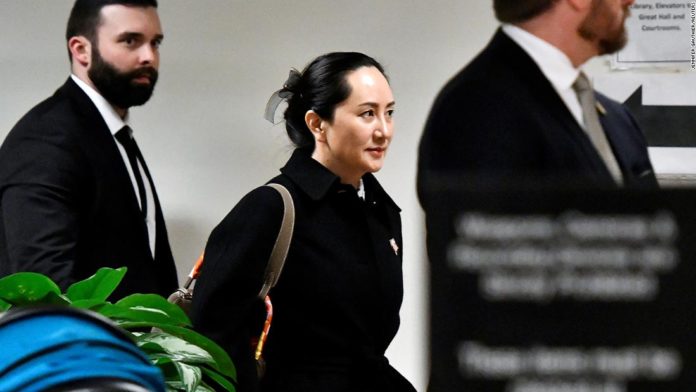 US prosecutors want Meng to stand trial on multiple charges, including bank fraud and violating US sanctions against Iran.
The decision to continue the case could have huge political implications for Canada, the United States and China. China’s government called the ruling a “grave political incident” in a statement posted to the Chinese Embassy in Ottawa’s official Twitter account Wednesday.
Following a four-day hearing in Vancouver’s Supreme Court in January, Holmes ruled Wednesday that the US allegations meet the key Canadian extradition standard of “double criminality,” which examines whether the conduct alleged by the country requesting the extradition could be considered a crime under Canadian law. The double criminality standard is a preliminary step in the extradition case; now that the judge determined it has been met, Meng’s case can proceed.
The ruling does not determine Meng’s guilt or innocence, only whether her actions would be considered a crime under Canadian law. Meng and Huawei have denied the US allegations.
Meng has also claimed that she was unlawfully detained, searched and interrogated by Canadian border officials during her arrest, allegations her lawyers say invalidate the extradition case against her. Those claims will be taken up for consideration by the court in upcoming hearings this summer as the extradition case proceeds.
Canada’s Department of Justice said in a statement Wednesday that another hearing later this year will “determine whether or not the alleged conduct provides sufficient evidence of the offense of fraud to meet the test for committal under the Extradition Act.”
“An independent judge will determine whether that test is met,” the statement reads. “This speaks to the independence of Canada’s extradition process.”
Huawei is “disappointed” with the ruling, according to a statement the company posted to Twitter on Wednesday.
“We expect that Canada’s judicial system will ultimately prove Ms. Meng’s innocence,” the statement reads.

Meng, the daughter of Huawei’s billionaire founder Ren Zhengfei, was arrested at the request of the United States in December 2018 at the Vancouver airport, where she had to surrender her passports and agree to live in one of two homes she owns in the city.
US authorities want Meng to be extradited to New York to face federal charges related to allegations that she lied to bank HSBC about Huawei’s relationship with its Iran-based affiliate Skycom, in order to receive funding that violated US economic sanctions against Iran. In February, the US government added racketeering and conspiracy to steal trade secrets charges to the indictment. Huawei also denied the new allegations.
The charges are from one of several active US cases against Huawei.
During the January hearing, lawyers for Meng argued that what she’s accused of does not break Canadian law, because the US allegations hinge on sanctions against Iran that do not exist in Canada. But prosecutors from Canada’s Attorney General’s office argued that the allegations, which include lying to a bank with the potential for causing loss, would amount to a Canadian fraud charge, and that Meng should therefore be committed for extradition.
“Lying to a bank in order to get financial services that creates a risk of economic prejudice is fraud,” Robert Frater, a lawyer for the attorney general, said during the January hearing, adding that the actions put HSBC at risk of US penalties for sanctions violations and reputational damage.
The judge’s Wednesday ruling came to a similar conclusion. Holmes wrote in the ruling that Meng’s argument that double criminality was not met because of the application of US sanctions “would give fraud an artificially narrow scope in the extradition context.”
Holmes added: “The double criminality requirement for extradition is capable of being met in this case. The effects of the US sanctions may properly play a role in the double criminality analysis as part of the background or context against which the alleged conduct is examined.”
A spokesman for the US Department of Justice said in a statement on the ruling that “the United States thanks the Government of Canada for its continued assistance pursuant to the U.S./Canada Extradition Treaty in this ongoing matter.”

The extradition case has pulled Canada into political tensions between the United States and China.
The Chinese Embassy in Ottawa issued a statement Wednesday urging Canada to release Meng.
“The United States and Canada, by abusing their bilateral extradition treaty and arbitrarily taking forceful measures against Ms. Meng Wanzhou, gravely violated the lawful rights and interests of the said Chinese citizen,” the embassy’s statement read in part.
The embassy accused the United States of trying to “bring down Huawei and other Chinese high-tech companies,” adding that Canada has been acting “as an accomplice of the United States.” The United States has taken a number of actions to hamper Huawei’s business over the past year and a half, as the country tangles with China on several fronts, ranging from trade and technology to politics.
“The whole case is a grave political incident,” the embassy added, calling on Canada “not to go further down the wrong path.”
The extradition proceedings were complicated after two Canadians, Michael Kovrig and Michael Spavor, were detained in China in December 2019. Beijing has charged them with espionage and denies that their arrests are related to Meng’s case, but they have been seen in Canada as a form of retaliation.
“We have seen China linking those two cases from the very beginning. Canada has an independent judicial system, that functions without interference or override by politicians,” said Canadian Prime Minister Justin Trudeau on Tuesday, ahead of the ruling in Meng’s case. “China doesn’t work quite the same way and don’t seem to understand that we do have an independent judiciary from political intervention. We will continue to uphold the independence of our judicial system while we advocate for the release of the 2 Michaels.”
Other Canadian officials, including Minister of Foreign Affairs François-Philippe Champagne, have also stressed the independence of the country’s judicial system as Meng’s case works its way through the courts.
“We will continue to pursue principled engagement with China to address our bilateral differences and to cooperate in areas of mutual interest,” Champagne said.