Home Lifestyle How to Make a Vodka Gimlet 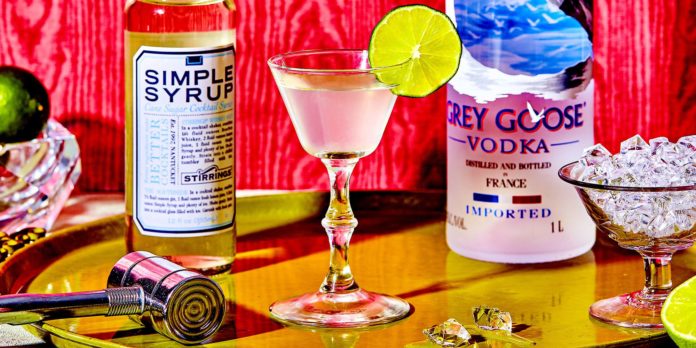 A Gimlet is a bright jewel of a drink—sour and bracing, but buffed to a palatable shine with some sugar and served ice cold. And broadly speaking, you’ve got two Gimlets to choose from: gin or vodka. Now, this choice does not simply come down to being a gin gal or a vodka guy. There is (perhaps surprisingly, as the Gimlet is pretty damn simple), more at play.

When we make a Gin Gimlet, we use Rose’s lime cordial, as is tradition. That oozing sweetness is easily countered by the herbal complexity of gin. But when we make a Vodka Gimlet, we don’t touch the Rose’s; it’d devour this less structural spirit. We use lime juice (fresh, naturally) and simple syrup. That makes a Vodka Gimlet a bit fairer. It’s still mostly sour and a bit sweet, and it’s still bracing, in the way that vodka’s burn is bracing at the tail end of a sip. All together, nice. A vodka drink that tastes like vodka, but not too much like vodka.

The Gin Gimlet is the classic version of this cocktail, and it is said to have been invented in Britain in the late 19th Century aboard a navy ship. Mix sailors’ gin rations with Rose’s lime concentrate, and you got a preventative measure against scurvy that no one would complain about taking. When vodka soared in popularity in the States after WWII, it makes sense that bartenders started serving the Vodka Gimlet as an alternative to the gin. Though it’s not exactly a historical document, in the first season of Mad Men, Betty Draper orders rounds of Vodka Gimlets from the bar.

Your first stop after the Vodka Gimlet might as well be the Gin Gimlet. You know, to compare and contrast. A Mezcal Gimlet will broaden the scope of your research. Outside the realm of gimlets, the traditional rum Daiquiri is similarly sour, as is a Margarita.

Here’s what you need to do a Vodka Gimlet justice, beyond what you might be able to dig out of the fridge or cupboard.