Home Culture ‘Quiz’ has the right answer for ITV’s ‘Who Wants to Be a... 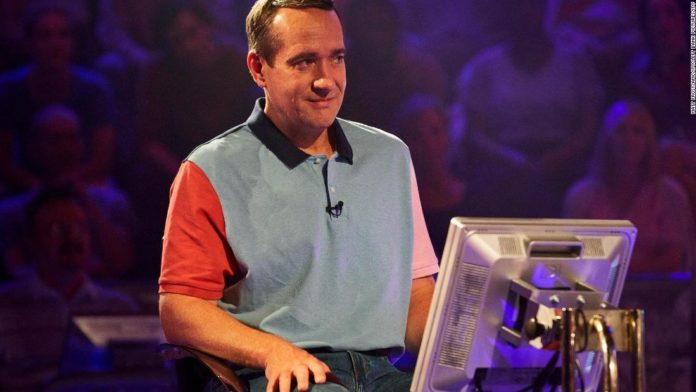 Much of that stems from the casting, with Matthew Macfadyen (“Succession”) as Charles Ingram, the not-so-bright bulb spotlighted by the exposure of this elaborate plot. Granted, he was reluctantly drawn into participating by his wife Diana (“Fleabag’s” Sian Clifford) and her brother.
The whole story is framed by their 2003 trial — “You are facing a 50/50,” a lawyer, clearly reveling in the moment, tells the jury — flashing back to key moments as those involved stumbled down this rabbit hole.
The opening chapter quickly races through “Millionaire’s” development and introduction, offering an amusing peek behind the curtain at high-stakes television the way the British do it, as the ITV network’s new head of programming (Risteard Cooper) rolled the dice on the quiz-show concept.
In a bold move, the network decided to strip the series throughout the week, seeking to create “event television.” The only notes were to change the title — “Cash Mountain” didn’t cut it — and revamp the set, which the suits gripe “looks like an interrogation by the Gestapo.”
As in America, “Millionaire” — buoyed by the prospect of riches, the play-along element and heightened sense of drama — took the country by storm. But it also birthed a group of trivia obsessives who plotted and conspired first to get onto the show, and who created an underground web to help the players — for a small percentage of their winnings, naturally.
Unlike the 1994 movie “Quiz Show,” which dealt with the original quiz-show scandal of the 1950s, the producers here aren’t complicit; rather, “Millionaire” masterminds Paul Smith (Mark Bonnar) and David Briggs (Elliot Levey) are increasingly alarmed by suspicions that outside forces could be “threatening the integrity of the game,” although those responsible are equally concerned that going public might deal a fatal blow to their golden cash cow.
Much of the drama plays out on the set itself, as Ingram — an army major — sits in the player’s chair opposite host Chris Tarrant (Michael Sheen, terrific as always), noodling out loud about his answers while stalling for sure sound like subtle clues from his wife and another plant in the audience.
At the outset, the prosecutor in the case describes the scheme as “an audacious heist,” as serious as robbing a bank. Yet the three-part miniseries — really just a longish movie, directed by Stephen Frears (“A Very English Scandal”) and adapted by James Graham from his play — effectively presents the couple’s defense, which boils down to the fact that sometimes, a cough is just a cough.
Premiering after the “Killing Eve” season finale, the artful presentation might leave some viewers feeling a trifle conflicted about the graveness of the Ingrams’ crime (they still maintain their innocence), especially given what we know now about the manipulative nature of unscripted television.
That tinge of uncertainty, however, merely adds zest to the experience. “Quiz” not surprisingly premiered in April to big ratings in the U.K., and it will be interesting to see what sort of reception it receives in America.
Given how entertaining it is, there’s a much better than 50-50 chance that those who watch won’t feel the least bit cheated.
“Quiz” premieres May 31 at 10 p.m. on AMC.