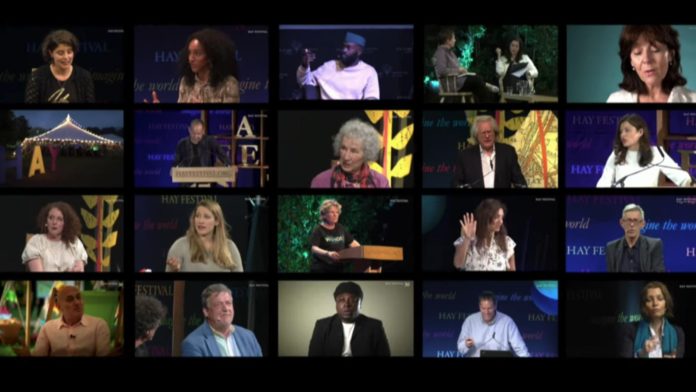 Whether it is fiction, crime or the classics, reading is enjoying a renaissance in lockdown.

The world’s biggest book event, the Hay Festival, has surprised even its organisers after being forced to go digital – and proving to be more popular than ever.

The town had already forked out for tents, catering and all the paraphernalia required, so organisers had braced themselves for the worst when they had to cancel the event.

But festival director Peter Florence has, to his own amazement, played a blinder.

“What’s happened is that a new global audience has re-invented Hay, making something very special in the intimate and public sphere, so we’re slightly giddy about how exciting it is.”

While most of the entertainment sector has suffered as music festivals, concerts, theatre shows and film productions hang in the balance, no one could have predicted the festival’s digital success.

“You’d never get them all in one space and here they are on this extraordinary platform,” adds Mr Florence.

Historian Simon Schama spoke at the Hay Festival Digital this week from the comfort of his own home and seems unsurprised that books are having a moment in lockdown.

Waterstones has reported a 400% increase in online book sales week-on-week in lockdown, despite having closed its 280 branches.

But, as the book chain’s chief executive James Daunt explained on Sky News this week, a complicated path to reopening bookshops lies ahead.

“People will want to browse and pick up books… We’re just going to ask customers to put any books they don’t use on a trolley and we’ll wheel them away and quarantine them for 72 hours,” he said.

But quarantining books isn’t an option for the 890 independent books shops in the UK and Ireland who say they simply don’t have the storage space or stock available.

The Booksellers Association said that while 76% of bookshops continued to trade through the lockdown with online business, they have only seen 18% of the normal turnover – and only a third expect to reopen fully.

Hazel Broadfoot, the owner of Village Books in south London, says she has been forced to adapt during lockdown by selling online with locals picking up their purchases from the store and paying through the glass.

Bookshops like hers are desperate to get their customers back through the doors.

“We are considering whether to ask people to wear reusable gloves but we don’t want to add to the plastic problem,” Ms Broadfoot said.

“We have got to limit the number of people we have in this space. It’s tiny… perspex screens at the till, hand sanitiser at the door, a queue outside.”

Former head of MI6 says theory coronavirus was made in Wuhan...