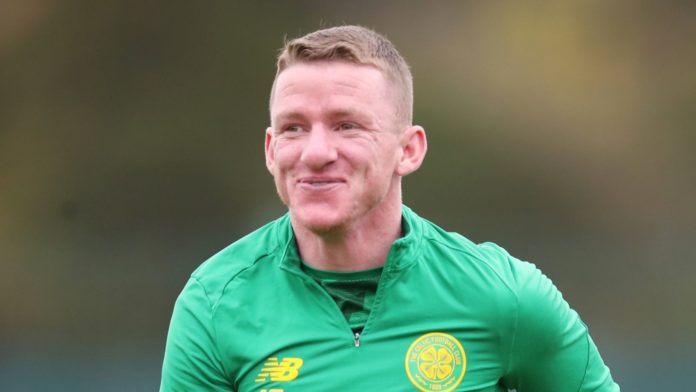 Hayes is out of contract at Celtic this summer; club captain Scott Brown says Hayes will be missed and will be “hard going into the dressing room to replace”

Jonny Hayes appears to have confirmed he is leaving Celtic after posting an emotional message on social media, with team-mates past and present sending well-wishes in reply.

Hayes, 32, is coming to the end of his three-year deal at the club which he signed after joining from Aberdeen in 2017.

He made 26 appearances in all competitions for Neil Lennon’s side this season, with his only goal coming in Celtic’s 2-0 win at Rangers in September.

His first season at the club was ended early after suffering a broken leg against Dundee in December 2017.

In a post on his Instagram page, Hayes said: “From the lows of breaking a leg to the highs of winning a treble, the last 3 years have been an enjoyable journey, in which I’ve worked under some terrific staff and shared a dressing room with some unbelievable guys.”

“Football at times brings tough decisions, so I’d like to thank you for all the support received along the way. Stay safe everyone.”

Commenting on Hayes’s post, Celtic captain Scott Brown said: “Going to miss you my man. What a man and what a player. Hard going in the dressing room to replace.”

Fellow teammate Greg Taylor added: “What a man”, while former Celtic defender Mikael Lustig wrote: “Honestly the best teammate you can have. Top player and decent stories. Was a pleasure to sit next to you during our years together. All the best in the future my friend.”