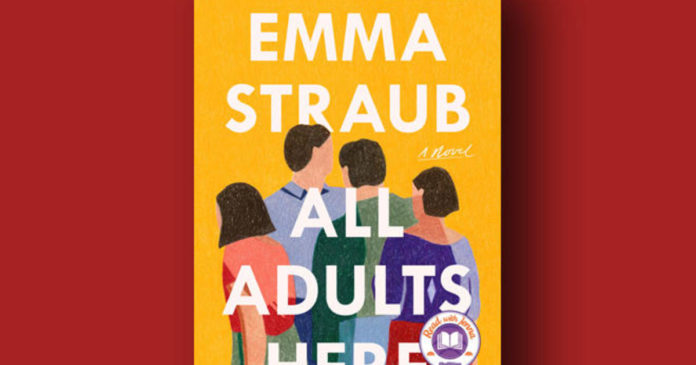 In her new novel, Emma Straub (the New York Times bestselling author of “The Vacationers,” “Modern Lovers” and “Laura Lamont’s Life in Pictures”) explores the repercussions of parenting mistakes, as a woman looks back upon her life (and of her three grown children) following a tragic accident.

In “All Adults Here” (Riverhead Books), when a widow’s resolve to reveal her own secrets is tested, more secrets can’t help spilling out of her children and grandchild, because families are messy – and, in Straub’s prose, also witty, perceptive and forgiving.

Read an excerpt below from Emma Straub’s “All Adults Here”:

Cecelia sat between her parents in the back seat of a taxi that smelled like body odor soup. Amtrak required unaccompanied riders between the ages of thirteen and fifteen to jump through a series of hoops, one of which was being escorted onto the train by an adult. The arrangement was supposed to be fun, but Cecelia could call a spade a spade. She was thirteen and had access to the internet. It was witness protection, more or less. Her school hadn’t expelled her, not officially. It was more an agreement to take a break, the way people’s parents did on television, right before their inevitable divorce. It was something Cecelia had said almost in passing when she and her parents were talking about what to do, how to solve the problem with her school. It was a joke, really— maybe I should just go move in with Gammy for the year. But the next morning, her parents were sitting at the tiny kitchen table, eyes bloodshot, as if they hadn’t moved since dinner the night before, and they said that they’d written to her school and spoken to Astrid and that, yes, that was the plan. Cecelia was hard-pressed to decide whom she was angriest at— her parents, for yanking her, or at her school, for letting her be yanked. It wasn’t close to fair. In fact, it was the opposite of fair. It was a Sucky Situation, even if it meant moving from a small apartment to a huge house. Any perks were vastly outweighed by the crushing feeling of apocalyptic failure and profound injustice. But Cecelia had tried to explain everything already a thousand times, and this was still where she ended up, so the idea of justice didn’t really matter anymore. It was done.

“The Big House is really best in the late summer, the whole valley, really.” Cecelia’s father, Nicholas Strick, Nicky Stricky, was the baby of his family, and had run away from his parents’ house before his eighteenth birthday and returned only for holidays and special occasions that had been guilt-tripped for months in advance. He was not a reliable source. The taxi turned onto Flatbush Avenue and headed toward the Manhattan Bridge. Cecelia thought her father could be the most handsome father in the world if he shaved his beard or cut the short, messy ponytail that he usually wore at the nape of his neck, or bought clothes that weren’t made for ranchers and cowboys. Instead her father always looked like someone who could be handsome if he wanted to be, but the beard and the clothes and the hair were effective deterrents.

“She really does have great taste, and she knows everybody,” Juliette said. Cecelia’s mom was French and knew about good taste, everyone said so. Juliette liked Astrid better than her husband did. She may have liked Astrid better than her husband, period. “There are big, clean public swimming pools, and you only ever have to wait because someone is slow, not because there are a hundred people ahead of you. Clapham is great, chérie, you know that. You always liked going there, even when that house was like a toddler disaster, and I was always afraid you were about to kill yourself on the edge of something. And anyway, it’s better to be in the countryside, it gives the blood more oxygen.”

That didn’t sound true, but Cecelia didn’t bother to argue. And if it was, what the hell had her parents been doing, depriving her blood of maximum oxygen for the past thirteen years? “I already agreed to this plan. It’s fine, really.” Cecelia’s suitcases were in the trunk. Together, the three of them— Cecelia and her parents— took up every inch of space in the car, like commuters on a rush-hour F train.

“D’accord,” Juliette said, patting Cecelia’s thigh. Her chin wobbled, and she turned her face toward the window. “Okay.”

“Are you sure you want to go by yourself? We could take the train up with you, get you settled.” Nicky had never volunteered to go to Clapham before— maybe this was already progress. He rubbed his hands on his beard.

“Can you manage the two bags, you think? There are escalators.” Juliette was a dancer, both strong and practical about bodies. It was a good quality in a mother. Whenever Cecelia had fallen down or injured herself as a child, Juliette would whip up a pant leg to show her daughter a scar. Cecelia was trying to remind herself of these things in order to decrease the life-size piñata of her parents that she was building in her mind at all times. It wasn’t their fault, but it also wasn’t her fault, and parents were supposed to be the ones who swooped in and fixed things. But her parents had never been the kind to make a fuss. Her mother was a dancer who pretended not to smoke cigarettes. Her father was a hippie who sold bundles of sticks and crystals to younger hippies on the internet. His claim to fame, outside of their family, where he was famous for his quinoa salads, trumpeting farts, and humorous, improvised songs, was playing a handsome high school student in one movie, The Life and Times of Jake George, filmed when he himself was a handsome high school senior. He’d found the experience of teenage girl fandom so appalling that he’d become a Buddhist and spent the next year in a monastery in Tibet. They weren’t the types to yell and scream on anyone’s behalf, even hers.

“It’ll be fine, Mom.” There was a tree-shaped air freshener hanging from the rearview mirror, and Cecelia watched it swing back and forth as they drove over the bridge. Taxi TV blared, and Juliette silenced it with her thumb. It was a beautiful day— blue sky, no clouds, no traffic. It almost made Cecelia sad to leave the city, but then she thought about going back to school in September and having her best friend not speak to her and having everyone else assume, because she was leaving, that she was the guilty party— shaming her! Cecelia Raskin-Strick, who had slept with her American Girl dolls until she was twelve, just last year! And they weren’t even soft plastic! And then she wasn’t sad, at least not about leaving. For the rest of the ride, her parents stared out their respective windows and Cecelia looked over the driver’s shoulder, trusting that he was going the right way.

From the book “All Adults Here.” Copyright © 2020 by Emma Straub. Reprinted by permission of Riverhead Books, an imprint of Penguin Random House LLC. All Rights Reserved.