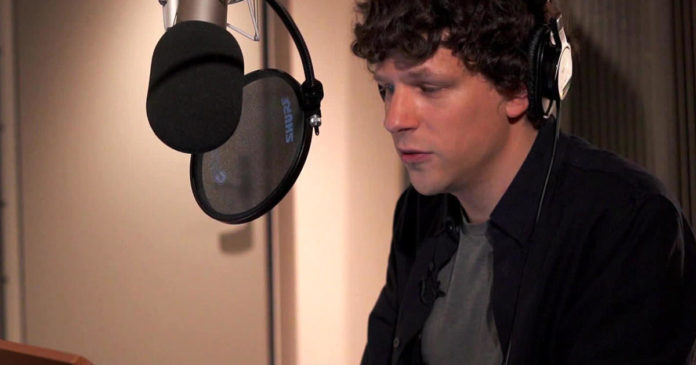 Rumor has it that you may have a little extra time at home these days. Well, here’s one way to fill it: Listening to books!

Now, in the old days, if you wanted to listen to a book, you bought “books on tape,” which weren’t what you’d call compact. Even books on compact discs weren’t very compact. One Harry Potter book fills 17 CDs!

But then … the smartphone made audiobooks so convenient that audiobook sales have grown by double-digits, year after year. More than 45,000 new audiobooks were recorded last year alone; and the industry registered a billion dollars in sales.

“I call my house the house that books built. It’s a nice living!” said Scott Brick, audiobook superstar. They call him “The Man with the Golden Voice.” He’s recorded “Jurassic Park,” “In Cold Blood.” “Alexander Hamilton,” and 900 other books.

Correspondent David Pogue said, “It’s not something people do in life, to read continuously for eight hours.”

“No, it’s true!” Brick replied. “People say to me, ‘I’m interested in doing audiobooks. What should I do?’ I say, ‘Well, grab something at random, go sit in your closet, and just read out loud for eight hours. And if you feel like doing it again tomorrow, gimme a call!'”

“I’ve had Lyft drivers say, ‘Have we met? I hear your voice, I feel like I know you,” Brick laughed. “I’ve had women who said, ‘I take you to bed every night with me!'”

But nobody’s a bigger fan of Scott Brick’s narration than bestselling author Brad Meltzer (“The Escape Artist”). “Scott has an amazing baritone,” he said. “He makes me sound handsome, more muscular. He makes me sound like I have hair!”

Pogue asked Meltzer, “Do you hear his voice as you’re writing?”

“I always put an accent, just to see if he can do it!” he laughed. “You’ll hear someone who has a Bulgarian accent in the book and you’re like, ‘Oh, that’s an interesting thing to describe.’ No, that’s just me trying to see if Scott Brick can pull it off in the audio book.

“People say, ‘Oh, why don’t you read your own book?’ I can’t do 30 voices, I can’t do scenes of someone’s death and make you come to tears. A good reader can do that.”

Listen to a sample from Brad Meltzer’s “The Fifth Assassin,” read by Scott Brick:

The very best readers come every year to the Audie Awards, the industry’s highest honor. This year, they were hosted by “Sunday Morning”‘s own Mo Rocca.

Once money, fame, and prestige came to the humble audiobook, it didn’t take long for Hollywood to notice.

“I read ‘The Complete Autobiography of Malcolm X as told to Alex Haley,’ and it was incredible,” said Laurence Fishburne. His résumé is full of credits from Broadway, TV and movies like “The Matrix.” But now, he can add “audiobook narrator.”

“Everything!” Fishburne laughed. “I have been blessed with what I’ve been told is a wonderful speaking voice. And so if I can use my speaking voice to tell stories that inspire people, that lift them up and  brighten their day, that’s a gift.”

“And is it acting?” asked Pogue.

Actor and playwright Jesse Eisenberg said, “I do remember walking out of the first recording I did as just a narrator, thinking, ‘That was the most taxing physical experience I’ve ever had.’ And I’ve, you know, trekked in Nepal.”

Eisenberg played Mark Zuckerberg in the movie “The Social Network” and Lex Luthor in “Batman vs. Superman.” But now, he’s pushing the definition of an audiobook. He’s written a three-character audiobook – audioplay? audionovel? – called “When You Finish Saving the World.” “It marries my two favorite things more acutely than anything else I could think of, which is, you know, writing fiction and performing.”

“And plus, you don’t need to dress up or take a shower!” said Pogue.

“It’s perfect for me. ‘Cause I barely do either one, except when I’m appearing on CBS!”

What’s also new about Eisenberg’s project is that he wrote it expressly for audio, not for print. It’s called an Audible Original. Audible.com is the Big Kahuna of audiobooks.

Pogue asked, “Is there a prestige value these days to having been a reader for some of these books? Is it, like, cool?”

“Yes,” Eisenberg replied. “I think actors (and I’m certainly one of them) who do a lot of Hollywood-style movies, I think for a lot of them, you feel like you also wanna be involved with the kind of small things that you’re a fan of, that don’t get as much attention.”

For now, audiobooks are getting a lot of attention. And by the way, you don’t have to pay money for them; you can download them from your library.

And one more thing:  There’s no shame in listening to a book. “You’re still getting the story,” said Brick. “You’re getting exactly what the author wanted you to get.”

Pogue asked, “But what about that whole thing about you, Scott, are depriving me of letting my brain imagine what they sound like?”

“I wanna do just enough to keep your imagination muscle working,” he said. “My job is to get the author’s story across, job one. If I’ve done that, then anything else is gravy.”