Home Culture Songs for our times: A COVID-19 playlist 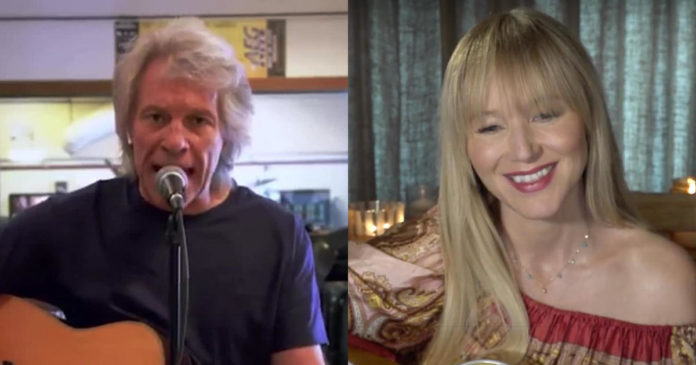 It’s been a while since we’ve seen Jon Bon Jovi solo. But with touring at a halt, and his new album release postponed until Fall, he’s spending a lot of his time at his non-profit JBJ Soul Kitchen restaurants in New Jersey, as an essential worker, helping cook take-out for the hungry.

His wife, Dorothea, took this picture of him recently doing the dishes:

The next day, that caption became a chorus … and the chorus a song.

“[I] carefully presented it to my audience, which was my family!” he laughed. “And hoped that they liked it enough that I wanted to share it with others. Because, you know, I was proud of it.”

Correspondent Lee Cowan asked, “Does it feel like you’re more, I don’t know, creative maybe isn’t the right word. But there’s something there, right?”

“There’s something there. And I realized that it was something that we are all going through. No matter who you are, no matter where you live on this planet, we experience COVID-19 together.

The COVID music muse has tapped a lot of bands on the shoulder recently. The Rolling Stones hadn’t released an original song in eight years, until this one: “Living in a Ghost Town,” complete with a video featuring a fish-eyed view of empty streets, screamed the headlines of our times:

You can look for me
But I can’t be found
You can search for me
I had to go underground
Life was so beautiful
Then we all got locked down
Feel a like ghost
Living in a ghost town, yeah

Justin Bieber and Ariana Grande captured the other pandemic’s signature – our endless posting of selfies in quarantine – in “Stuck With U,” a video musical chat.

And if that’s not enough of a mirror on our lives, there’s the upbeat COVID collaboration of Michael Bublé, Barenaked Ladies and Sofia Reyes, who remind us all we just “Gotta Be Patient.”

But now there’s almost a new genre blossoming that some are calling “Pandemic Pop.” Like Luke Combs’ “Six Feet Apart”:

On Spotify, one of the nation’s largest music streaming platforms, there’s a “Sound of the Virus” playlist that contains nearly 5,000 new COVID-related songs.

And while some songs are predictably awful (the parody “My Corona”), others, like “Level of Concern” from Twenty-One Pilots, may just stand the test of time:

Cowan asked, “What does that say that so many artists are trying to figure out some way write about this?”

“People have tried to make sense of this kind of catastrophe for a very long time in song. I mean, this is nothing new,” said Sean Wilentz, a history professor at Princeton University. He says what IS new is the tone of many of the new COVID songs which, he says, differs from the doom-and-gloom of pandemics past.

Take “The 1919 Influenza Blues,” a song performed by Essie Jenkins about the outbreak of the Spanish Flu.

Well it was God’s almighty plan,
He was judging this old land,
North and south, east and west,
It can be seen,
It killed rich and poor,
And it’s going to kill some more,
If you don’t turn away from your shame.

Wilentz said, “People were dying everywhere. Death was creeping all through the air. The groans of the rich sure was sad. That’s a great line, right?”

Then there’s Blind Willie Johnson, whose song “Jesus Is Coming Soon” made the flu seem like the End of Days.

Cowan said, “It could have been written yesterday.”

“It put us all away,” Wilentz said. “Around the world everybody’s, you know, social distancing. Same thing historically. I take a certain comfort from it all, not just that people have endured, but that others have felt the way I’m feeling.”

Some songs become an anthem for a crisis, even if they weren’t written specifically about it, like after the AIDS crisis. “The one song that I remember out of all of that is Queen, ‘Another One Bites the Dust,'” Wilentz said. “That’s a tough song. It’s not sentimental.”

During this our current crisis, many of the songs, though, have a softer touch, like Jewel’s early release of a song off her upcoming album, titled “Grateful”:

Jewel told Cowan, “One thing I’ve really learned in my life is the darkest of times are the most fertile opportunities.”

“Grateful” was written before the pandemic, but she said it reminds her of overcoming another mental adversity long ago: “You know, I became homeless, because I wouldn’t have sex with the boss. I started living in my car, and then my car got stolen, and I was homeless for a year. So, I have really learned to see these are the times that shape us. It’s not fun, and it’s not comfortable, but we wouldn’t change otherwise.”

She started an online concert and talk series called “Live from San Quarantine,” where she sings and talks mental health and mindfulness, a concern she had long before COVID made us all think about self-care a little bit more.

“Our minds are a bit geared to look toward the negative,” Jewel said, “and we have to work harder to see what’s actually working, and there’s a lot working, always. So, it’s just taking the wins where you get ’em, really having a chance to celebrate them.”

Jon Bon Jovi’s idea of celebrating was to bring his fans into his COVID songwriting process. He asked anyone to contribute lyrics to “Do What You Can,” including kids from Marsh Pointe Elementary School in Florida.

“Kindergarten kid? I’m probably old enough to be parents of their parents!” he laughed.

The lyrics the class sent him said so much about our current time. [“My parents try their best, but I can tell that they’re stressed”]

Bon Jovi said, “For me to be singing it back to a five-year-old who said Mommy and Daddy are feeling stress, they’re learning what that word is through song. That was all very touching. It was very moving.”

So yes, while there are a lot of COVID-19 songs, each one matters to someone differently. And each one remains a marker of a time that has changed everything.

Cowan asked, “How do you think you’re gonna be different after all of this?”