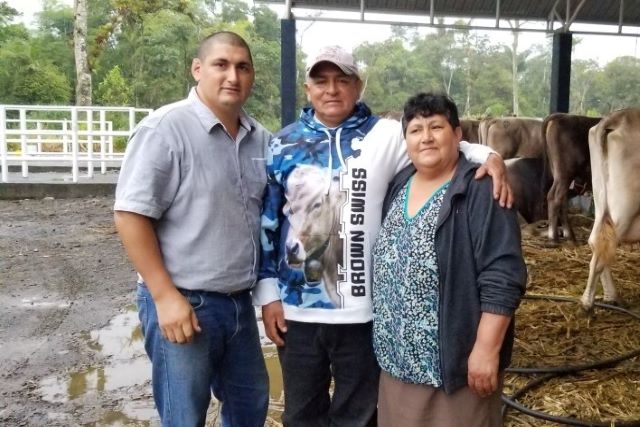 When the local dairy supply centers closed because of the COVID-19 emergency, Alvaro Ramon, a cattle farmer and milk supplier in the Amazon region of Ecuador, was left with many gallons of milk and a spirit of solidarity. He decided to give away his surplus milk to help the families affected by the lockdown and the broken supply chain. One morning at the beginning of the pandemic, when restrictions were first put in place, Alvaro posted on social media, “If you know someone who needs milk, we are giving it away today.” He hoped that this post would reach more families in need and motivate other local producers who were in similar situations. In a few minutes, Alvaro was flooded with messages from people all over the community: mothers with young children, elderly, as well as young families. They were all more than eager to receive Alvaro’s help. “I was motivated to provide my daily production of milk for free, and I started safely delivering milk to low-income families, pregnant women and to mothers with young children,” said Alvaro, committed to the community in which has been living for more than 35 years.

In Ecuador, for a large portion of the population, the “stay at home” measures implemented to halt the spread of COVID-19 have meant losses of income and limited access to food or even clean water. These restrictions have also put a strain on smallholder producers’ access to markets, in turn creating bottlenecks in the flow of goods and services in certain towns and cities. Specifically in the Morona Santiago province, families in Alvaro’s community, the Huamboya community, have had trouble obtaining fresh products, such as milk, eggs and vegetables, because of the restrictions on movement. As Alvaro had not been able to sell his milk in the markets, his production would have gone to waste. Realizing that this was a precious commodity for many in his region, Alvaro decided that kindness was the answer. He obtained the mandatory safe-conduct document to allow his movement, and he drove his truck to distribute 50 liters of milk to around 20 families in his community.

Alvaro has dedicated his life to cattle production and is one of the beneficiaries of FAO’s Climate-smart Livestock project in Ecuador, funded by the Global Environment Facility (GEF). He has been an active participant in the farmer field schools that address the environmental and productive issues of livestock. The project has helped Alvaro and many other cattle producers to increase production in a sustainable way. Since March, the situation has been improving and milk production is now going strong, with countries of the region working together to support the food supply chain and avoid a food crisis. The small act of kindness shown by Alvaro has earned him plenty of safe-distanced love and appreciation in form of applause, smiles, gratitude and comments on his social media posts. “Thank you for the milk, it’s delicious,” reads one of the many comments on his post.

Alvaro is one of 1 056 cattle producers that have applied sustainable livestock practices because of training provided by the FAO-GEF Climate-smart Livestock project. This initiative has increased livestock productivity and farmers’ incomes in seven provinces of Ecuador. The project also provides smallholder producers’ access to microfinance for “green” initiatives. Since May 2019, the project’s cooperation with BanEcuador has provided over USD 953 000 to support producers in implementing climate-smart livestock practices on their farms. These good practices will potentially reduce carbon emissions by 1 000 250 kilograms of CO2 per year.

Increased crises and shocks are a reality for farmers around the world, and climate change plays no small role in this. FAO has been working with the GEF for over two decades to address the critical relationship between agriculture and the environment, supporting projects that engage smallholder producers worldwide and focus on sustainable, environmental and climate-friendly production practices. This crisis reinforces how stronger, sustainable livelihoods are the cornerstone to resilience and to overcoming shocks, but kindness is what keeps communities together and helps them really move forward.