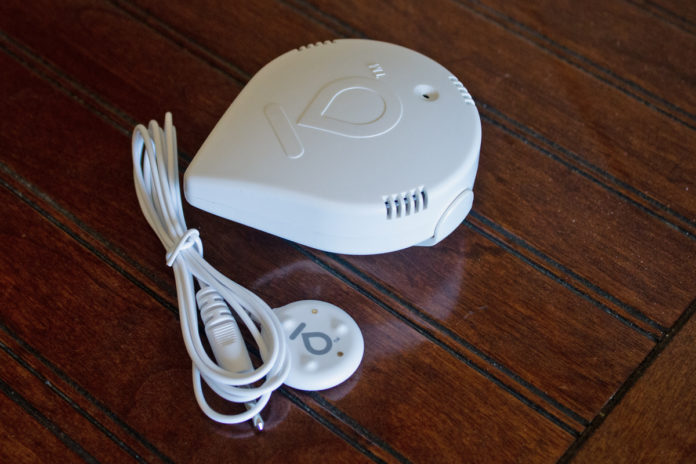 Flo by Moen makes our second-favorite smart water shut-off valve. It now offers the $50 Flo by Moen Smart Water Detector, which can be used with that device or independently of it. It’s our new top pick in this category.

As we’ve reported many times, your home is much more likely to be damaged by the presence of water in locations where it shouldn’t be than any other risk, including fire, earthquake, or even vandalism. The tiniest leak from a water valve, supply line, drainpipe, appliance, or a damaged roof can cause devastating structural damage over time. The U.S. Centers for Disease Control and Prevention also warn that water leaks can cause conditions hazardous to your long-term health, by promoting mold growth.

This review is part of TechHive’s coverage of the best smart water leak detectors, where you’ll find reviews of competing products, plus a buyer’s guide to the features you should consider when shopping.

The droplet-shape of the Flo by Moen base unit is cute, but not necessarily functional. It can be placed on the floor, where its water-sensing probes will detect even the smallest amount of water, and it will also monitor and report the ambient temperature and relative humidity level where it’s installed. The base unit will float, but the company says users should avoid allowing water to get inside the vents on top (these are needed to monitor temperature and humidity).

That could be a problem if water is coming from above the unit, so the manufacturer provides a wall-mount bracket and a remote sensing disk with a four-foot cable. Best practice would be to hang the base unit on the wall, plug in the cable, and snake the sensor disk to where you think unwanted water might appear. For this review, I attached it to the wooden brace securing my water heater to the wall, and I placed the sensor disk in the water heater’s drain pan, where water shouldn’t collect unless the water heater leaks or its T&P (temperature and pressure) relief valve opens.

Should that cable not be long enough to reach the spot where you want to monitor for leaks, Flo sells a six-foot extension cable that you can plug the sensor disk into. Unlike the sensing disk’s cable, the entire length of the extension cable is sensitive to water (this is one of the features that we like most about the competing Honeywell Home Water Leak and Freeze Detector. You can join three of Flo’s extension cables together to get 18 feet of sensor coverage, but each one costs an additional $20 (Honeywell’s extension cables cost the same).

The Flo by Moen Smart Water Detector uses the same mobile app as the Flo by Moen Smart Water Shutoff, so I already had the app on my phone because I reviewed that product in November, 2018 and forgot to uninstall it when I removed that device from my main supply line (more on the app in a bit). As you would expect, the two products can work in concert with each other, with the sensor triggering the valve to shut off your water supply if it detects a leak.

You can assign each sensor a nickname when you add it to the app (“water heater,” “kitchen sink,” etc.). Each sensor will produce a critical alert if it detects water. You can also configure the sensor to send two other classes of alerts: warning alerts (device offline, high humidity, high temperature, low battery, low humidity, or low temperature) and informational alerts (device back online). These alerts can be sent via push notification, text message, email, and even via a phone call—if you subscribe to the company’s FloProtect service. FloProtect costs $5 per month, and is most valuable if you also own the company’s smart valve (you can see what’s included at this link).

You can toggle the humidity, temperature, and battery-level warnings on and off within the app, and you can also set upper and lower tolerances for humidity and temperature levels. The sensor can detect temperatures ranging from minus 20 degrees Fahrenheit to 140 degrees F, with accuracy of plus or minus 3 degrees F from minus 20 degrees to 40 degrees, and plus or minus 2 degrees F from 40 to 140 degrees. A low-temperature alert can warn you of the danger of your pipes freezing (and potentially bursting), while high-humidity alerts can make you aware of conditions where mold can sprout.

When I poured a small amount of water in the water heater’s drain pan next to the sensor disk, a not-very-loud local alarm sounded almost immediately. But less than five seconds passed before I received a text message warning of potential leak and an alert appeared in the mobile app. Within 10 seconds, I received a robocall warning me of the same. The response time was impressive.

Flo by Moen’s device operates on a single CR123A lithium battery, which the company says should last two years. It’s outfitted with a single-band (2.4GHz) 802.11 b/g/n Wi-Fi adapter, so it connects directly to your home Wi-Fi network without requiring a central hub. That makes for a very easy deployment and a relatively low barrier to entry in terms of cost. But if you already have a smart home system that supports leak sensors—e.g., Ring Alarm or Samsung SmartThings—leak sensors compatible with those systems tend to be cheaper, because they don’t need their own Wi-Fi adapters. Ring Alarm Flood & Freeze sensors, for example, communicates over Z-Wave and cost $35 each—$15 less than this product.

I would like to see Flo by Moen add IFTTT support, so that the sensor’s alerts could trigger other devices outside the Flo ecosystem. It would be great, for example, if a leak or high humidity alert could trigger a smart bulb to flash a warning in the event you don’t have your smartphone at hand or its battery is dead. Perhaps that will come with time. In the meantime, this water leak detector earns our strong recommendation.

Minister tells Tom Cruise he can carry on filming in UK...

COVID-19: Our response in Yemen