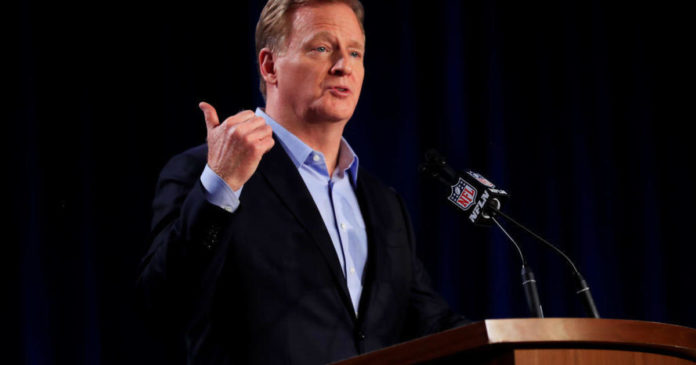 NFL Commissioner Roger Goodell is under fire for his response to the nationwide protests against police brutality, which began last week in response to the death of George Floyd in Minneapolis. His critics, among them NFL players, pointed to the handling of Colin Kaepernick‘s kneeling protests.

In his statement, Goodell said the “NFL family is greatly saddened by the tragic events across our country” and the “protesters’ reactions to these incidents reflect the pain, anger and frustration that so many of us feel.”

“As current events dramatically underscore, there remains much more to do as a country and as a league. These tragedies inform the NFL’s commitment and our ongoing efforts,” Gooddell added. “There remains an urgent need for action. We recognize the power of our platform in communities and as part of the fabric of American society.”

In response, Texans wide receiver Kenny Stills tweeted, “Save the bulls***.” Stills is one of the few players who continue to kneel on the sidelines during the national anthem to protest racial injustice.

“Shame on you. This is beyond hollow + disingenuous. This is a lie. Your actions show who you are,” said director Ava DuVernay. “You’ve done nothing but the exact opposite of what you describe here. Keep Mr. Floyd’s name out of your mouth. Shame on you + the ‘consultants’ of this travesty of an organization.”

“Colin Kaepernick asked the NFL to care about the lives of black people and they banned him from their platform,” tweeted Michael-Shawn Dugar, a reporter with The Athletic.

Kaepernick hasn’t played in the NFL since the 2016-2017 season when he began kneeling during the national anthem to protest police brutality and racial injustice.

In 2017, Kaepernick and safety Eric Reid filed a grievance against the league, alleging they remained unsigned because of collusion by owners following the kneeling protest. Reid would later sign with the Carolina Panthers the following year. In February, the NFL and lawyers for Kaepernick and Reid reached a private settlement for an undisclosed sum.

Jed York, CEO of the 49ers, tweeted a statement in response to the protests.

“People throughout our country are hurting,” York said. “Emotions are raw, and rightfully so. Heinous acts have been committed in recent weeks. Before we are able to realize impactful change, we must first have the courage and compassion as human beings to come together and acknowledge the problem: black men, women, children and other oppressed minorities continue to be systematically discriminated against.”

Former NFL player Torrey Smith, who played for the 49ers during the 2015-2016 season, defended York. “I’ve had countless conversations with Jed about these issues when I was in SF. I’m grateful for his commitment to the Bay and injustices everywhere,” Smith tweeted.

Reid, who knelt beside Kaepernick, criticized York. “I see that a lot of y’all think that it takes money to get justice. It does not. It takes money to facilitate injustice. Justice is easy, the system chooses not to give it,” Reid tweeted.

“You speak based on your experience and I understand that. However, I can tell you that you never heard him say ‘don’t kneel’ because you never knelt. He begged me not to kneel,” Reid tweeted.