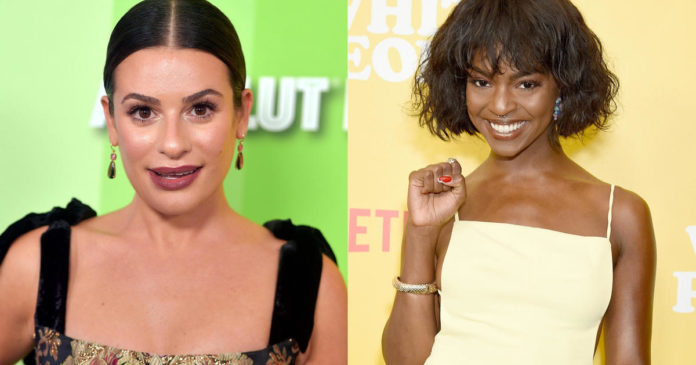 Actress Lea Michele is at the center of a social media firestorm after she tweeted about the death of George Floyd last week, writing that the 46-year-old black man killed by police in Minnesota “did not deserve this.” The former “Glee” star included the hashtag #BlackLivesMatter, but some felt her activism was disingenuous. One of Michele’s former co-stars, Samantha Marie Ware, immediately called her out on Twitter over her past behavior, launching an avalanche of tweets from others.

After several actors accused Michele of mistreatment and racism, she apologized on Instagram. However, Ware, who was the first to speak out about Michele’s behavior, is doubling down on her accusation.

On Tuesday, Ware tweeted that Michele made her first television gig “a living hell,” saying she’ll never forget it. “I BELIEVE YOU TOLD EVERYONE THAT IF TOU HAD THE OPPORTUNITY YOU WOULD “S*** IN MY WIG!” AMONGST OTHER TRAUMATIC MICROAGRESSIONS THAT MADE ME QUESTION A CAREER IN HOLLYWOOD…” Ware replied to Michele’s tweet about Floyd.

Ware starred alongside Michele on “Glee” during the show’s final season in 2015. Her tweet prompted several others to come forward with accounts of Michele’s poor behavior and mistreatment of others on set.

Alex Newell, who played Wade “Unique” Adams, a transgender teenager on the show, replied to Ware’s tweets several times, as did several background actors, who tweeted about disappointing experiences with Michele while on set, according to Entertainment Tonight.

Actress Jeanté Godlock, was one of several who said Michele referred to background actors as “cockroaches.”

Many fans replied to Ware’s tweet too. Some pointed out that “Glee” actress Naya Rivera had “tried to warn” others about Michele’s poor behavior in the past. In her 2016 book, “Sorry Not Sorry: Dreams, Mistakes, and Growing Up,” Rivera described Michele being “unprofessional” on set and the tension between them while filming.

Heather Morris, another “Glee” star, also spoke out about Michele’s behavior on Wednesday. “Let me be very clear, Hate is a disease in America that we are trying to cure, so I would never wish for hate to be spread to anyone else. With that said, was she unpleasant to work with? Very much so; for Lea to treat others with the disrespect that she did for as long as she did, I believe she SHOULD be called out,” Morris wrote on social media, adding that part of the blame is on others who allowed it to “go on for so long without speaking out.”

“But, at the current moment it is implied that she is a racist and although I cannot comment on her beliefs, I think we’re assuming, and you know what happens when we all assume…” Morris’ post continued.

Former “Glee” star Amber Riley replied to Ware’s tweets with several gifs, later saying on the “Real Quick With Danielle Young” podcast that she didn’t care about Michele, and the attention should be placed elsewhere, ET reports. “People are out here dying, being murdered by police. Trans women are being murdered by the hands of men who are upset about being trans attracted,” said Riley, who portrayed Mercedes Jones on the show.

Other entertainment industry professionals also spoke out about Michele. Former “30 Rock” actor Keith Powell replied to Ware’s tweet by writing: “I co-sign on this. Lea Michele is a terrible human and has said terrible things to many different types of people, including racist micoagressions to/about black people.”

In a long message posted on Instagram, Michele issued an apology on Wednesday. While she said she didn’t remember “making this specific statement,” apparently referring to Ware’s accusation, she acknowledged that’s not really the point.

“When I tweeted the other day, it was meant to be a show of support for our friends and neighbors and communities of color during this really difficult time, but the responses I received to what I posted have made me also focus specifically on how my own behavior towards fellow cast members was perceived by them,” Michele wrote.

In the post, Michele acknowledged that she “acted in ways which hurt other people.”

“Whether it was my privileged position and perspective that caused me to be perceived as insensitive or inappropriate at times or whether it was just my immaturity and me just being unnecessarily difficult, I apologize for my behavior and for any pain which I have caused,” she wrote.

Hours after Michele posted the apology, Ware spoke out again, commenting on Michele’s use of “perceived” in her statement. In her post, Ware also linked to the GoFundMe for the family of James Scurlock, a 22-year-old black man who was shot and killed while protesting in Omaha. “Open your purse,” she wrote, apparently urging Michele to donate.