Home Culture Joe Exotic says Carole Baskin getting his zoo is a ‘treachery’ that... 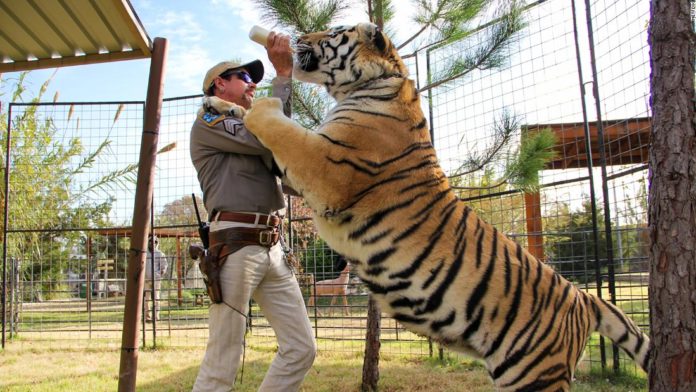 This month, a judge ruled in favor of Baskin’s Big Cat Rescue in her suit against the Greater Wynnewood Development Group, LLC, the company Joe Exotic once owned, giving her control of the G.W. Zoo in Oklahoma.
Exotic, whose legal name is Joe Maldonado-Passage, is still in prison serving a 22-year sentence for a murder for hire plot against Baskin and animal abuse, among other charges. The allegations against him were documented in the smash Netflix docuseries “Tiger King,” released after he was sent to prison.
So his team spoke for him from Twitter.
“While we again acknowledge it is truly time to pray for justice for George Floyd’s family as well as an end to systemic racism in America, we must address Carol [sic] Baskin’s treachery before it goes unchecked,” a tweet from an account run by Maldonado-Passage’s management team read.
His team released a longer statement on the website “Help Free Joe,” in which the “Joe Exotic Team” said it “prays for justice for George Floyd’s family as well as an end to systemic racism in America.”
A few lines later, the statement said Maldonado-Passage’s legal team is filing appeals while his media team drums up public support.
CNN has reached out to Maldonado-Passage’s attorney for comment and is waiting to hear back.
The court order that awarded Baskin control of the G.W. Zoo gives her 16 acres of land in Garvin County, Oklahoma, as well as several cabins and vehicles, court records show.
The zoo’s current owner, “Tiger King” supporting player Jeff Lowe, must vacate the premises within 120 days of the order and remove all the animals, too.
Lowe’s attorney told CNN that the judgment wasn’t unexpected, and Lowe’s currently focused on opening a new “Tiger King” park within the next 120 days.

CNN’s Jennifer Henderson and Hollie Silverman contributed to this report.