Home World Mandatory Streamers: Fab 5 Head to the City of Brotherly Love in... 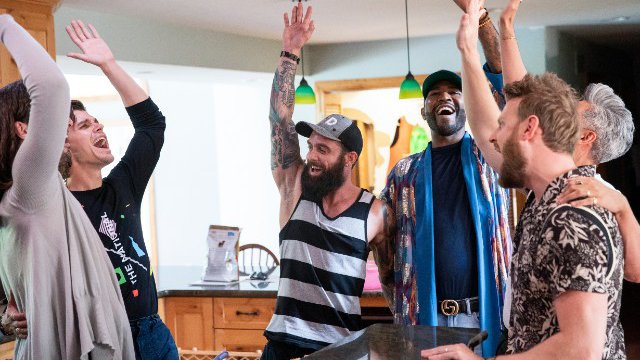 Welcome to Mandatory Streamers, our column covering the best new streaming content coming your way every week! For the week of June 1, the Fab 5 are heading to the City of Brotherly Love to make over a new cast of everyday heroes in the fifth season of Queer Eye. Check out the best shows debuting and returning online this week as well as the latest renewal announcements below, and be sure to visit our mother site Mandatory by clicking here!

Queer Eye, Season 5 Premiere: In the fifth season of the Emmy Award-winning reality series, the Fab 5 journey to the historic city of Philadelphia to continue serving up hip tips, emotionally charged makeovers, and heartfelt reveals that bring out all the feels. The new season will begin streaming on Friday, June 5.

13 Reasons Why, Season 4 Premiere: The final season of Netflix’s young adult drama steers towards graduation, where the students are forced to make life-changing and heartbreaking choices about how their past will pact their future. Eight months after preventing Tyler from committing an unthinkable act at Spring Fling, Clay, Tony, Jessica, Alex, Justin, and Zach find ways to shoulder the burden of the cover-up together while helping Tyler move toward recovery. But when the aftermath of a tumultuous Homecoming game culminates in the disappearance of a football player, and Clay finds himself under police scrutiny, it’s up to a shrewd outsider to steer the group through an investigation that threatens to lay bare everyone’s deepest secrets. Season 4 will launch on Friday, June 5.

I May Destroy You, Series Premiere: This fearless, frank, and provocative series explores the question of sexual consent in contemporary life and how, in our modern landscape of dating and relationships, we make the distinction between liberation and exploitation. Following triumph from a piece of writing that garnered internet acclaim, Arabella Essiuedu (writer & EP Michaela Coel) – easily distracted, non-committal, and carefree – finds herself feted as the ‘voice of her generation,’ with an agent, a book commission and a helluva lot of pressure. After being sexually assaulted in a nightclub, her life changes irreversibly, and Arabella is forced to reassess everything: her career, her friends, even her family. As Arabella struggles to come to terms with what has happened, she begins a journey of self-discovery. The half-hour series will debut on Sunday, June 7, and will be available to stream on HBO’s platforms.

Liar, Season 2 Exclusive Streaming Premiere: In a surprising start to the season, three weeks after damning evidence was uncovered proving Andrew Earlham (Ioan Gruffudd) sexually assaulted nineteen women, his body is found in the Kent marshes. As one of Andrew’s more recent victims, Laura Nielson (Joanne Froggatt) can’t help feeling relieved by the news of his death. Yet the seaside community is rocked when the case quickly becomes a murder investigation. Out of town officer DI Karen Renton (Katherine Kelly) is put in charge of the case, and together with DS Rory Maxwell (Danny Webb), they begin to unpack the events of the three crucial weeks leading up to Andrew’s death. As the search to find Andrew’s killer gains momentum, many will be forced to face up to the secrets of their recent past, secrets many of them hope will stay buried. The first episode of the season is streaming now, with a new episode added every following Thursday.

The Capture, Season 2: BBC has officially renewed Ben Chanan’s spy drama series The Capture for a six-episode second season! The renewal comes after more than eight months since its successful premiere in the U.K. where it was positively received by critics and the audience. The first season is scheduled to premiere in the U.S. on July 15, exclusively on NBCUniversal’s new streaming service Peacock.