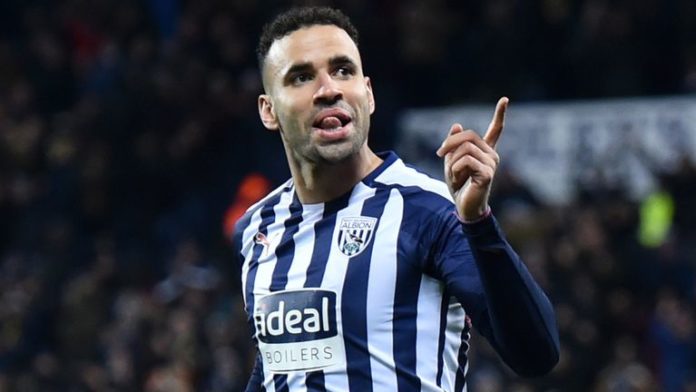 The retired Wales international, who launched his own turmeric business, has scored a career-best 10 goals in the Championship this season

Hal Robson-Kanu is on the cusp of a return to the Premier League with West Brom. Ahead of the proposed resumption of the Championship season later this month he is determined to drive his club’s promotion charge.

The forward, a hero among Wales fans for his individual brilliance in scoring during their stunning victory over Belgium in the quarter-finals at the Euro 2016 finals, is now enjoying his most prolific campaign in front of goal.

At 31, under the management of Slaven Bilic, he has scored a career-best 10 goals from 31 Championship appearances this season.

Two years on from their relegation to the second tier of English football and following what will be a three-month suspension due to the coronavirus pandemic, second-placed Baggies face a nine-game run-in to decide what division they will feature in next season.

June 20 – when Championship football will resume – is fast approaching.

“It is a quick turnaround,” Robson-Kanu says. “This week I think we will be playing 11 vs 11 friendlies and as of this weekend we will be two weeks away from the resumption of the season.

“But we are going to be back into the thick of things quite quickly given the time frame that we have to complete the games.

“Players and the staff are doing everything we can to prepare in as best a way as possible. It is obviously an unprecedented situation in terms of managing it and trying to prepare our bodies mentally as well to get back into that level of intensity. But we will certainly be ready.”

But it could have all been so different.

At 15, shattered by the reality of ruptured knee ligaments, he was told the prospect of playing at the elite level of English football would be out of the question.

While playing in the Reading youth team he was left devastated by serious damage to an anterior cruciate ligament (ACL). Not once, but twice and in quick succession.

His surgeon, at the time of his two reconstructions of his knee over a two-year period, advised him to consider a new career.

It was definitely a lightbulb moment for me at the time – being a teenager – the impact nutrition can have.

After what he describes as two years of swelling, constant pain and side effects following reactions to playing, the former Arsenal schoolboy puts his eventual recovery and subsequent success in his career down to, of all things, turmeric.

“It was definitely a lightbulb moment for me at the time – being a teenager – the impact nutrition can have,” he says.

Along with the help of his father, he created a blend of natural ingredients which he confidently says helped save his career and sparked the launch of his business The Turmeric Co.

“It was certainly a journey where I was dedicated and determined to get back playing, but when I did, two years after the surgery, I was constantly hampered with the pain, niggly injuries,” he recalls.

“My knee would constantly swell up and a lot of the prescription medication, which I was taking at the time, the anti-inflammatory drugs I was having adverse effects to them.”

London-born Robson-Kanu, unlike many of his peers, has been directly involved in helping NHS staff and frontline workers during a period of great emotional distress across the country.

He says around 5,000 of his shot drinks have been delivered to key workers, including to staff at the St Pancras Hospital along with other care package deliveries to ambulance crews.

Amid an uncertain picture during the pandemic, Robson-Kanu admits there were concerns within the West Brom camp ahead of returning to day-to-day training, but such fears have since been allayed.

Now, the focus switches to ensuring the club, lying second in the table and six points clear of nearest chasers Fulham, finish what the squad started last summer under the leadership of Bilic – securing Premier League football.

“That is the goal without a doubt,” he says.

“It has turned into a mini-season almost with nine games to go. We will be focused to hit the ground running from the first game.

“It is going to be very intense, but we have shown it all season. We have been up in the top two for the whole season and we have shown that we are deserving of having a place there, so now it is about getting back to that and finishing the season strong.

“Our ambition, ultimately, is to finish the season in the top two places.”

West Brom, who trail league leaders Leeds by one point, will resume the season later this month with a West Midlands derby meeting against Birmingham City at The Hawthorns.

Robson-Kanu is under no illusions that his side must hit the ground running, having gone two games without a win prior to the suspension of the division on March 13.

“That is part and parcel of being at the top of the league,” he adds. “You will always have teams chasing you and it is important that we hit a run of form as soon as we start back.

“The first game is going to be massive in terms of picking up points on the board. But ultimately, we have to make it a continuation of our season.”

To find out more about The Turmeric Co, visit https://theturmeric.co