Home Sport Williams up for sale, but sure of ‘positive future’ 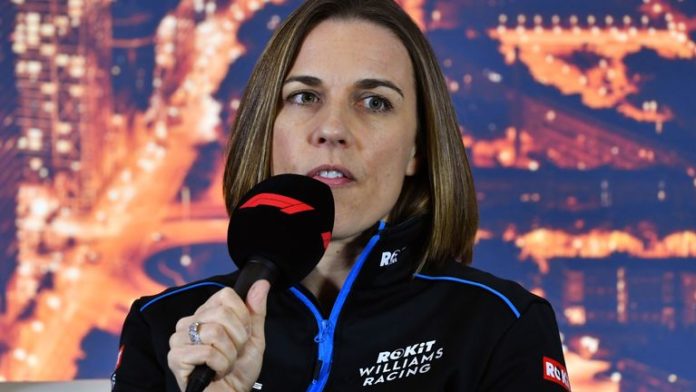 Claire Williams has insisted the search for investment for the famous Formula 1 team should only be viewed as a positive, telling Sky Sports F1 that she sees “no reason why Williams can’t be successful again”.

Williams confirmed last week that its F1 team was up for sale after a £13m loss in revenue for the company last year, as part of a ‘strategic review’ following disappointing seasons on the track.

The move marks a major change in direction, given it has been under family control since Sir Frank Williams founded the team in 1977.

But Claire Williams, Frank’s daughter and the deputy team principal, is adamant it is the right thing to do.

“It’s funny – I’ve been getting so many emails of condolence,” she said on The F1 Show. “It’s much appreciated, but I’m looking at this in a really positive perspective as this will ensure the future sustainability of our team.

“Williams, the Williams family, has always been about that. We put our team first, and we put its success first. The investment that we’re looking for is going to help us achieve that.

“So for me this is a good thing that we’re doing and it shouldn’t be looked at in a negative way, in a disappointing way or anything other than a positive. The people at Williams understand that and I think they’re excited.

“This can potentially give us a very positive future.”

Williams hope to get back to winning races

Williams last won a championship in 1997 with Canadian Jacques Villeneuve, and have not won a race since 2012.

They finished last in 2019 with just one point scored by now-departed Polish driver Robert Kubica, and were also 10th overall in 2018.

But Williams added: “I’ve always had a very clear ambition for Williams as deputy team principal and as part of the family.

“We had a few great years, and then a few very, very awful ones in which we’ve all felt an enormous amount of pain. That’s why this investment is so important and can give us the funding to achieve our ambitions.

“I see no reason why Williams can’t be successful again and can’t get it back to where we all really want to see it – that’s at the higher end of the grid and doing well in every Grand Prix.

“My ambition for Williams will always be that this team returns to the top of the podium.”

Williams admitted that the formal sale process has started because of poor performances on the track, the increased investment of rival teams and the coronavirus crisis.

Because of the terminated relationship with previous title partners ROKiT, the team will have a different livery to the one they revealed at pre-season testing once the 2020 championship starts next month.

“I can absolutely wholeheartedly promise you that we have a fully-funded budget to continue this year’s calendar, whatever that calendar may look like,” explained Williams.

“The car will still be a Williams, there will still be the same people involved, the only thing that will change is we will have a slightly different livery.

“We’re desperate to get back to the race track when it’s safe to do so because we put in so much work over the past 18 months to turn this team around.”