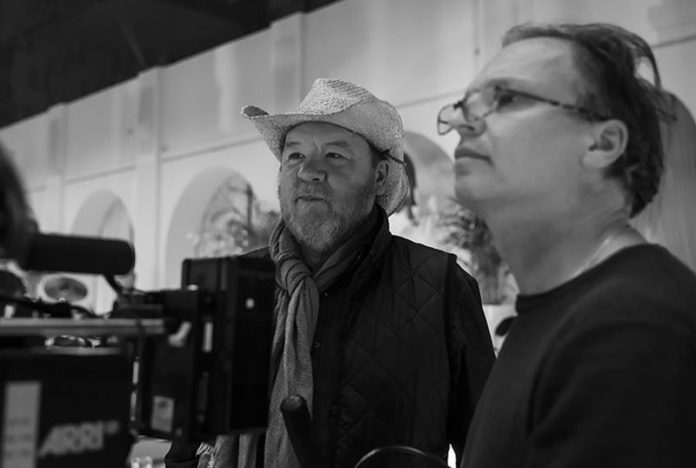 Ahead of the film’s digital and select theaters release, ComingSoon.net got the chance to chat with director Bruce McDonald (Pontypool) to discuss his upcoming crime thriller Dreamland starring Stephen McHattie (Come to Daddy), Henry Rollins (He Never Died) and Juliette Lewis (I Know This Much Is True). Click here to rent Dreamland on VOD!

While the film’s plot sounds like a generally routine setup in the crime thriller world, a gang boss hiring a hitman for revenge on a local musician, McDonald laughs whenever he finds his friends asking him, “What’s your fucking movie about or what are you doing?”

“Sometimes I say, ‘Well, it’s a Eurotrash jazz Western,’” McDonald described. “That’s one way I can think of saying it. If was going to describe the story I would say, ‘Well, it’s a story about a contract killer named John Dead Eyes who is hired by his underworld boss who runs a club called Al Qaeda Hercules, and he’s hired to cut off the finger of Chet Baker before he plays the wedding of a vampire and his child bride at the countess’ palace.’ And then, off we go. So it’s a kooky, crazy, sort of noir-ish, maybe a redemption story in some ways. It’s like a bad many trying to do a good thing. So I’ve tried to keep it playful and kind of fun. From the mad mind of Mr. Tony Burgess, the writer.”

The script is penned by Tony Burgess and Patrick Whistler, the former of which previously worked with McHattie and McDonald on the 2008 horror hit Pontypool. McDonald discussed some of Burgess’ previous work, including a film the horror novelist penned named Septic Man which was “voted somewhere as the 17th worst movie ever made,” though he noted Burgess is “a bit proud of that.”

“Tony’s great, a true original,” McDonald opined. “He’s very fluid and he’s kind of mad in a beautiful way, and yeah, I just love the guy because he’s sort of outside of the game in a way, and so he doesn’t concern himself too much with what you’re supposed to do and how you’re supposed to do it. He just kind of, he does his conjuring and then it’s up to me to try to see if I could figure out how to put the pieces together.”

When it came to developing the script and story for Dreamland, McDonald recalled coming across the 2009 short film The Deaths of Chet Baker, in which McHattie starred as the legendary jazz musician and explores the possible ways of how he died, and found it to be a very “interesting film” that sparked the initial idea.

“Steve played such a great Chet Baker, I showed it to Tony and I said, ‘Tony, we should do something for something else with Steve because we had a fun time,’” McDonald recalled. “I said, ‘Maybe we can do something around this idea of him as an older Chet Baker.’ So Tony went away and then came up with this crazy story with a contract killer and a countess and a vampire. And I said, ‘Well, this is not really a Chet Baker story,’ and he goes, ‘No, no, it’s Chet Baker, heroin addicted Chet Baker was going to make a movie or imagine a movie, this might be a movie he would imagine.’ So I was like, okay, great, so we’ll do that. So we kind of embraced our heroin Chet Baker and kind of followed him down the crazy river.”

In exploring this concept of Baker’s heroin-addled mind, the film ends up having a very David Lynchian quality to it in which the events of the story feel surreal and the characters are themselves a bizarre bunch, and McDonald found that shooting in the “weird place” of Luxembourg and Belgium helped tap into that tone.

“I said, ‘Okay, this is a movie called Dreamland so don’t worry too much if things don’t complete make sense,’ like I kind of quoted David Burns’ “Stop Making Sense” as our kind of mantra,” McDonald explained. “So people just kind of stepped up, I think the designer and the costume person and the DP, they were kind of encouraged to I guess be dreamy. This sounds very simplistic, but they listened more to their impulses rather than their logic, you know, they didn’t double think themselves or question too much why they thought that these kids should wear little suits or why the club is called Al Qaeda or why these things existed. Everybody seemed to enjoy themselves and have fun, and a lot of them came to me during or after and said, ‘You know, usually we’re always told what to do and how to do it and on this one, you just kind of let us loose a little bit.’ So I was like, ‘Well, it’s called Dreamland so it’s my job just to try to keep the dream in Dreamland.’ But so everybody had a fun time adding onto the madness, I guess, and whatever skill they were coming from.”

The film also sees McHattie take on a dual performance as both the Chet Baker-inspired fading musician as well as the cold-blooded hitman who is finding his heart warming as the film’s story progresses, which McDonald found to be “a real treat” and that he “felt like I had a front row seat and he was doing all the work.”

“I worked with Steve many times and I knew his commitment and his ability, I knew how much work he puts into a character, the details and things like that,” McDonald described. “So you know, on a Tuesday Johnny would be there and a Wednesday would be the trumpet player. It was always funny to see how different it was and we’d look forward to the different versions depending on what was being shot. It was just sort of a lovely lesson or a lovely display of a really fun actor’s talents and the little touches that he would add to things and the little character beats, whether they would be physical things or you remember at the beginning we spent a lot of time thinking about the hair, what kind of hair would each of them have. But these were all very, very careful and considered decisions on his part and with his team of hair people and all that sort of stuff. So I really admired his incredible attention to detail right down to what kind of lighter does he have and what kind of suits does he wear and what does his place look like. So it was really fun to have the actor – and he was involved really from the beginning, too. He would see different drafts of the script and he would comment on this or that. So he really helped us, even though he’s quite mad in the film, he helped us keep somewhat of an emotional through line for his characters.” 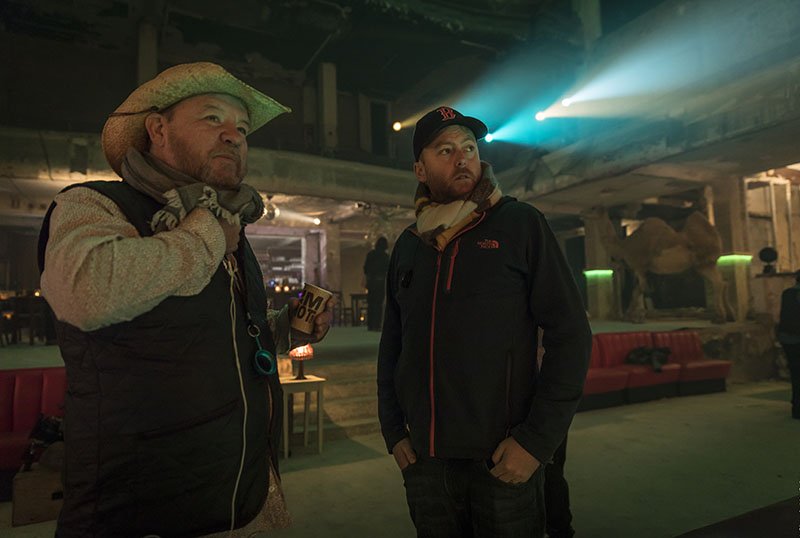 In looking back at his time bringing the film to life, McDonald found one of his biggest challenges was in trying to find the right tone in the editing room, namely when it came to the score, as he had put together an edit of the film with a temp score featuring one David Bowie track as the underlying music.

“In this cut, the producers got really, really used to the temp music, so when we finally did the score, which is by this guy Jonathan Goldsmith and is really lovely, it was a huge deal to kind of make them forget the Bowie track we used from Hunger or the stuff that we would never afford in a million years, but it was a challenge to get the fine and lovely producers off this thing that they’d just been used to for so many months,” McDonald noted. “That was a huge challenge, and so one of my lessons as a director was like, I don’t think I’m ever going to use temp music again. It was such a fucking nightmare. It’s fun when you’re cutting and you get a thing, but then when people get used to it, it’s a real trap. And then when the new music comes in, they can’t really hear it because they’re just hearing what was there before. So that was definitely a challenge.”

Another major challenge McDonald found in the film was trying to branch out both in shooting locations and cast members, finding that one can “get used to our gang or used to your peeps,” but that once he did start to embrace them, it became a “relatively super fun shoot.”

“You’re always dealing with the usual like time and money and that sort of thing, but you know, it was generally a really pleasant experience and it was initially a little bit nerve-wracking when you go to a brand new place and it was just me and I’m the new guy and everybody else I’d never worked with anyone before except for some of the actors, Stephen and Juliette and Henry,” McDonald explained. “But other than those people, everybody was new. So initially I was a little bit kind of thinking that might be an issue, but it turned out to be a real blessing that the people that came forward and worked hard, we had a great time. So that was a good lesson. It’s like sometimes playing with new friends is a good thing. You get used to your home team, and you kind of rely on them and you feel like, well, I do what I do because of them and I’m good because I’ve got my gang of my home team DoP and different people. So you think, ‘Is it going to be the same if you replace all the members of the band? What if we don’t play in tune or what if somebody is a freak?’ Luckily on this one, it was smooth and fun.”

As the film draws to a close and the credits begin to roll, a tribute message comes up for Rob Gray, a production designer with whom McDonald had worked together on multiple projects in the past, including Picture Claire. In mentioning the tribute, McDonald recalls that Gray died of cancer roughly a year before finishing the film and calling him a “dear, dear great friend” and noting that “he probably would’ve been working on the film with me.”

“I thought, ‘Fuck, Rob would’ve fucking loved this,’” McDonald noted. “So it was my dear friend and he’s also a mad man and a lover of music and a fantastic production designer and a great colleague. So I just decided to dedicate the film, but I don’t know, there was a time when I was sitting there by myself and I was like, ‘I wish Rob was here.’ I know he would love this and he would’ve loved to be a part of it. So it was my way to salute a great artist and a great, dear friend.”

Written by Burgess and Whistler and directed by McDonald, Dreamland centers on the night of the strangest weddings in cinema history, in which a grotesque gang boss hires a stone-cold killer to bring him the finger of a fading, drug-addicted jazz legend.

McHattie leads a cast that includes Henry Rollins (He Never Died), Juliette Lewis (I Know This Much Is True), Tómas Lemarquis (Blade Runner 2049) and Lisa Houle (Pontypool). The film is set to hit select theaters, digital platforms and on demand on Friday!