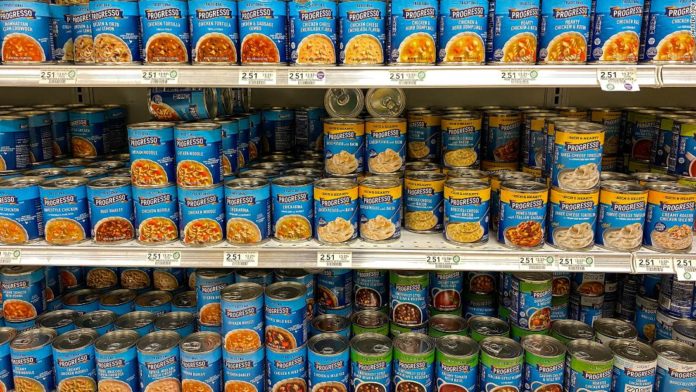 That’s partly because items are selling out more quickly than they used to. But it’s also because major food companies — the ones that make our cookies, chips and canned soups — have been paring down their product offerings.
When stay-at-home orders went into effect this spring, Mondelez (MDLZ), General Mills (GIS), PepsiCo (PEP), J.M. Smucker (SJM), Campbell (CPB), Coca-Cola (KO) and others saw a massive spike in demand for some products. To help meet that increase, they sped up production lines on their most popular items -— and that meant cutting back on more fringe offerings. That translates to fewer varieties of Jif peanut butter, Oreo cookies and Frito-Lay chips at the store.
The reason behind the move: Manufacturing plants for major food companies typically have to pause their production lines to switch out the product and packaging when they go from making one variety of cereal, for example, to another.
“There’s significant time required to change lines,” said Jonathon Nudi, General Mill’s group president of North America retail, during a March conference call with analysts. He added that making fewer products is one way to simplify the supply chain.
Speeding up the production process has become especially critical at a time when more people are eating at home and demand for certain food products is surging.
“The less complexity there is in [the supply chain], the greater the chance for success,” said Coca-Cola CEO James Quincey during an April call with members of the media. He added that during the early days of the pandemic, “focusing in on the largest brands,” like Coke, Coke Zero, Simply and Minute Maid, was a benefit to consumers.
With smaller product portfolios, companies can also narrow their advertising, distribution and sales efforts, focusing funds and energy on a smaller number of items.
The change marks a shift from pre-pandemic thinking. Typically, big food companies try to capitalize on a food trend by adding a new variety to an existing brand: Think of gluten-free or protein-packed versions of traditional cereals, or pumpkin-spice everything.
Before the pandemic, that complexity in the supply chain was worth it so that food makers could move into new and fast-growing categories. But now, it makes more sense to focus on the items people are buying the most: Comfort foods, staples and straightforward flavors.

For Mondelez, that means making fewer varieties of its most popular brands, like Oreo.
“Some of the innovation flavors that we have in the pipeline … we’ve chosen to either postpone or cancel to allow us to make sure that, from a production standpoint and an execution standpoint, we can continue to deliver to consumers what they know and love,” said Glen Walter, president of North America for Mondelez. Overall, the variety of Oreos available isn’t “as robust today as it would have been before the pandemic,” he said.
Regular Oreo has seen “the biggest uptick,” said Walter. Demand for Oreo Thins and fudge-covered Oreos has also grown, he said.
General Mills, which makes Cheerios cereal and Progresso soups, is following a similar tactic.
“If you think about our Progresso Soup portfolio, we have nearly 90 [varieties], and within those we likely have several varieties of Chicken Noodle,” explained Kelsey Roemhildt, the company’s corporate communications manager, in an email. “Right now, our consumers and our retailers likely don’t need the flavor variations so we’re minimizing the variety we are making.”
And PepsiCo’s Frito-Lay has also cut down on options across its chips portfolio.
“We began streamlining our portfolio in early March, when we saw demand spike to unprecedented levels,” said Frito-Lay Chief Customer Officer Mike Del Pozzo in an emailed statement. “To keep products in stock at the pace they were selling and to get more product to market faster, we reduced assortment of our core brands.”
The vast majority of the items that Frito-Lay paused producing, like Lay’s Lightly Salted potato chips and Cheetos Crunchy Xxtra Flamin’ Hot chips, are in production again, he added. But some are still unavailable, like Tostitos Multigrain Scoops tortilla chips.
J.M. Smucker has temporarily scaled back production on some of its Jif peanut butter varieties, like Reduced Fat, Omega 3 and Simply versions of the product. Same goes for the hazelnut, honey, peanut butter and reduced sugar versions of Uncrustables — a line of frozen sandwiches and pockets — and jams and jellies aside from strawberry, grape, blackberry, raspberry and orange marmalade. The changes allowed Smucker to increase production on its more popular items, like some of its Jif peanut butter products.
“We are pleased with our efforts to replenish inventory across our portfolio,” the company said in an emailed statement, “and are gradually returning to normal production levels.”
Campbell, too, stopped making certain varieties during the pandemic as demand for its soups and other products increased. “It accomplished the goal of increasing capacity in the short term,” said CEO Mark Clouse during a recent analyst call. But, he added, “It is not the right answer longer term.”

Companies will likely soon go back to producing their full portfolio of goods, said David Driscoll, an analyst covering packaged food at DD Research.
By December, “consumers are going to be looking for some new products in the grocery store,” he said, adding that it probably means big food companies will launch new products in the second half of the year to meet demand.
Major companies informed Morton Williams, a New York supermarket chain, of limited product assortments in March, said Steve Schwartz, the grocer’s director of sales and marketing.
But some customers were disappointed when they didn’t find the items they were looking for, he noted.
“I hope everybody can get back to running more of a full line operation,” Schwartz said. “We built a lot of what we do on having variety.”
Larger grocers had similar experiences.
“In the early weeks of the pandemic, we worked with suppliers to prioritize the most productive [varieties] to help maximize production of high demand items and move product to shelves more quickly,” Walmart (WMT) said in an emailed statement. “We are working with suppliers to gradually increase assortment.”
Not everyone sees a swift return to normal, however.
Kellogg (K) which makes Eggo waffles, cereal and other snacks, is another company that has been prioritizing its core products. CEO Steve Callihane told analysts during a call discussing Kellogg’s first quarter results that the trend isn’t going away anytime soon. Next year, “grocery stores [and] retail outlets will probably have less [items] than they had going into the pandemic,” he said.