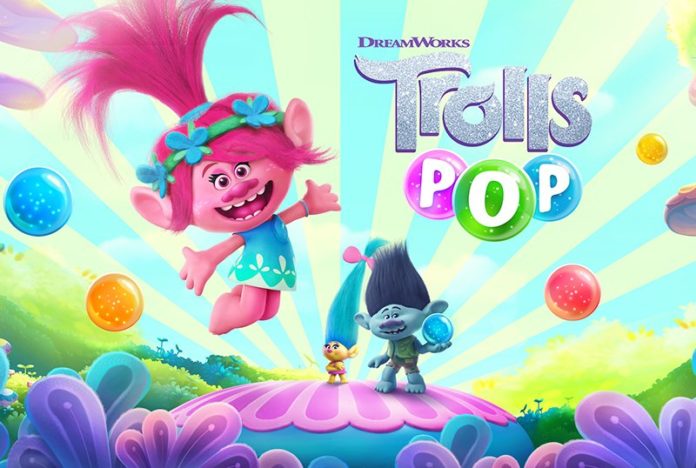 Huuuge Games, in collaboration with Universal Games and Digital Platforms, has announced the expansion of its portfolio and first foray into the bubble shooter genre with the launch of DreamWorks Trolls Pop. Available now on the App Store and Google Play, Trolls Pop lets players blast through vibrant bubble clusters, complete fun and challenging puzzles, play through immersive missions, and collect more than 15 fan-favorite Trolls characters at launch, including Poppy and Branch. You can check out the trailer for the game below and pre-order your copy of Trolls World Tour here!

To coincide with the global rollout of Trolls World Tour, Trolls Pop gives fans the opportunity to continue their engagement with the dynamic and high-spirited world with brand new adventures, such as baby bug rescues and reuniting lost stars with the moon. With easy to learn gameplay, fans will simply need to aim, match, and pop the bubbles.

“Huuuge Games has done an amazing job in bringing beloved Trolls characters to life in a new and exciting way by adding challenging puzzle elements and the expected variety and surprise that is unique to DreamWorks Trolls,” said Alexis Gresoviac, General Manager of Studio-X, Huuuge Games. “With our impressive collection and customization of Trolls characters with numerous costumes, we believe that there is no other game that will give players a deep dive into this colorful, wondrous and lovable world, and is the perfect addition to Huuuge’s growing casual games line-up.”

“As Trolls World Tour continues to entertain fans around the world, our goal is to provide an extension of the Trolls experience that resonates with and engages a broad range of players,“ said Jim Molinets, SVP of Production, Universal Games and Digital Platforms. “Trolls Pop brings together a diverse collection of characters and is infused with upbeat music and high energy that offers countless hours of entertainment for every member of the family.”

Trolls Pop is now available to download for free, with in-app purchases, on the App Store and Google Play.