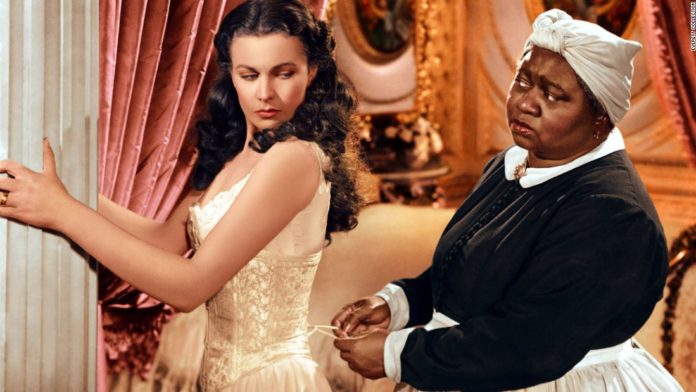 The 1939 movie — adapted from Margaret Mitchell’s bestselling novel set during the Civil War — also contains numerous problematic elements that haven’t aged well, from stereotyped depictions of African Americans to the debate over whether the staircase scene between Rhett and Scarlett, which concludes off screen, was a case of marital rape.
“Gone with the Wind” is the latest movie to face renewed concerns about its exposure in the 21st century, as studios mine their libraries to stock the shelves of new streaming services. The controversy over that erupted again this week, as HBO Max, the new service from CNN parent WarnerMedia, announced that it was temporarily pulling the movie from its rotation.
The film will return, a spokesperson said, with “a discussion of its historical context” and denunciation of its racially charged aspects. The movie itself won’t be altered.
The announcement followed a Los Angeles Times oped by filmmaker John Ridley, who noted that the film “glorifies the antebellum south” and perpetuates “some of the most painful stereotypes of people of color.”
Disney has already publicly wrestled with these issues in launching its streaming service, Disney+, opting not to include the 1946 film “Song of the South,” another title that romanticized the old South. Disney+ has made other movies available, such as “Dumbo,” with a disclaimer that reads, “This program is presented as originally created. It may contain outdated cultural depictions.”
Seeking to contextualize old films is not a new issue for WarnerMedia. The company’s stable of cable networks includes Turner Classic Movies, which presents such films with hosts who introduce and discuss them.
The specific debate over “Gone with the Wind” is hardly a new one either, but as HBO Max noted, it comes at a moment when the United States is again grappling with its history on the subject of race — and how those attitudes filtered through the culture and entertainment of the times. Notably, the new Netflix series “Hollywood” zeroes in on that topic, with McDaniel — who was segregated from her white co-stars at the Academy Awards — featured as a minor character within the fictionalized retelling.
The questions surrounding “Gone with the Wind” actually predated the film. Debate immediately ensued over the 1936 publication of Mitchell’s novel, with its nostalgia for plantation life, portrayal of happy slaves and threatening freed blacks, and sympathy toward the Confederate cause.
As the Washington Post’s Alyssa Rosenberg noted, even McDaniel’s award-winning performance “couldn’t wholly transcend the trope of a loyal slave who rejects freedom and prefers to serve her former owners.”
Weighing the movie’s negatives versus its merits — including Vivien Leigh’s portrayal of the iconic heroine Scarlett O’Hara — Rosenberg concluded it is “the one Confederate monument worth saving.”
The discussion of what to do with movies like “Gone with the Wind” arose again in 2017, when a theater in Memphis, Tenn., opted to drop it from a screening series after the Unite the Right rally in Charlottesville, Va.
“You can’t sweep history under the rug,” USC professor of media and cinema studies Todd Boyd told the Los Angeles Times at the time, adding. “But it’s important to have context whenever you’re viewing material of this kind. Otherwise, people can embrace and celebrate it without dealing with the whole truth.”
That process can be messy, and it inevitably invites criticism — especially from conservatives eager to portray Hollywood liberals as bowing to calls for censorship. Accused of insensitivity in the past, it’s possible to engage in what can look like overreactions in the present.
But there’s a difference between context and censorship. If the best answer to potentially offensive speech or art is more speech or art, facilitating a broader conversation about a classic like “Gone with the Wind” — which is a far cry from sweeping it away — represents a reasonable solution.