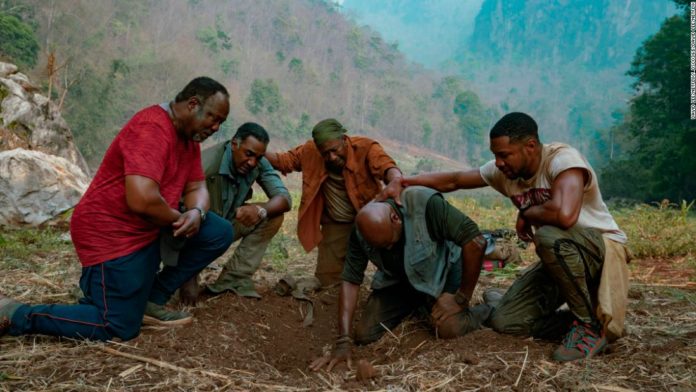 Foremost, this Netflix debut provides a strong showcase for its mostly 60-something stars, featuring Delroy Lindo (in his fourth Lee film), “The Wire’s” Clarke Peters and Isiah Whitlock Jr., and Norm Lewis as a quartet of African-American veterans who make the trip back to Vietnam, decades later. They’re ostensibly seeking the remains of a fallen comrade (Chadwick Boseman, in flashback), but there’s another, more practical prize: Bricks of gold, hidden away at the time of his death.
Lee opens the movie (which runs more than 2 ½ hours) with a montage that sets the historical foundation, from the 1960s through the present day. Indeed, Lindo’s Paul horrifies his peers by sporting a “MAGA” hat, triggering one of several tart observations about the current president.
African-American soldiers, it’s noted, fought and died for a country that didn’t fulfill its promise to them back home. That fosters various ideas of what to do with the buried treasure — after, that is, the arduous trek to find it.
Not surprisingly, that quest doesn’t proceed smoothly, hitting several snags and roadblocks along the way. They include a certain kind of madness triggered by the prospect of riches, in an overt nod to “Treasure of the Sierra Madre” — Lindo is basically the Bogart character — although various classics, among them “Apocalypse Now” and “Bridge on the River Kwai,” each get their turns.
In some respects, Lee isn’t far removed from the material he explored in “BlacKkKlansman,” his 2018 Oscar nominee, in drawing direct lines from America’s past to its still-troubled present.
The connections, however, were cleaner there. Part of that has to do with project’s origins, since Lee and “BlacKkKlansman” collaborator Kevin Willmott basically retrofitted an existing script about soldiers looking for old loot, while embarking on various tangents, such as Paul’s relationship with his grown son (Jonathan Majors), who unexpectedly tags along with them.
Lee has a way of juggling multiple ideas within his films, but to use a war metaphor, he’s fighting on too many fronts — trying to service the story and subplots while fleshing out the historical context. That includes not just these soldiers’ stories but the immorality of the war, its impact on the Vietnamese people, and the injustices African Americans faced at home, then and now.
The sweep of the film is admirable but would have benefited from a more tightly constructed story. That said, a few sequences hit with bracing intensity, highlighted by Lindo, who at one point delivers a riveting monologue directly to the camera as he marches through the jungle.
The flashbacks contain a puzzling choice, scarcely making up the actors, so everyone other than Boseman looks pretty much as they do in the present day. Even without a budget for de-aging technology like that employed on “The Irishman” (itself an imperfect device), casting younger players in those scenes would have been the better — or at least less distracting — option.
Stripped to its essence, “Da 5 Bloods” offers a stark reminder of how the issues that have burst into the public arena in recent weeks have bubbled and periodically erupted, a byproduct of having gone unanswered and unaddressed for decades.
It’s another timely, thought-provoking message from a filmmaker known for them, in a movie that piles so much on its plate as to fall short of Lee’s best.
“Da 5 Bloods” premieres June 12 on Netflix. It’s rated R.