Home World POLL RESULTS: What Pre-MCU Heroes Should Be in the MCU Multiverse? 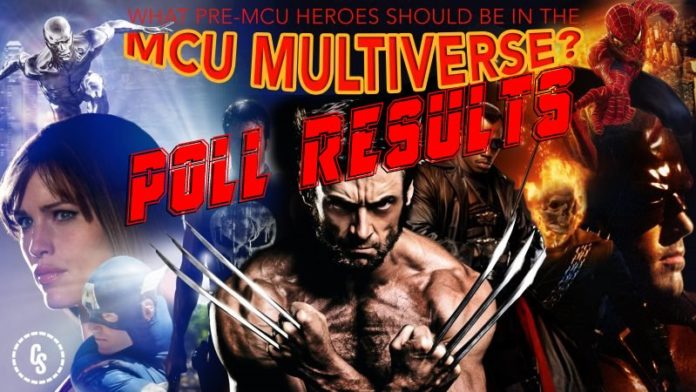 POLL RESULTS: What Pre-MCU heroes should be in the MCU multiverse?

After nearly a week since asking our readers which pre-MCU portrayal of a Marvel character they would like to see appear in the Marvel Cinematic Universe as Doctor Strange in the Multiverse of Madness opens up the door to these returns and receiving over 1100 votes, ComingSoon.net’s poll has closed and the results are in with one record-setting hero becoming the victor.

RELATED: POLL RESULTS: What is the Best Director’s Cut?

What Pre-MCU Heroes Should Be in the MCU Multiverse?

Hugh Jackman set a record with his portrayal as Wolverine in Fox’s X-Men franchise, becoming the Guinness World Record holder for longest career as a live-action Marvel superhero after 18 years of appearances across various films and after seeing the devastating demise of the adamantium-clawed hero, fans are clearly not ready to leave him behind.

The rest of the results are below:

While Doctor Strange is reportedly set to introduce Mahershala Ali’s portrayal of the iconic vampire hunter Blade to the MCU, he was previously portrayed by Wesley Snipes in a trilogy beginning in 1998, with the success of the first film helping to pave the way for future big screen adaptations of Marvel characters. With Snipes expressing interest in the past few years in reprising the role, there is always a chance for director Sam Raimi to find a way to bring in both iterations of the role, alongside Tobey Maguire’s portrayal of Spider-Man, whom Raimi directed in his webslinging trilogy.

Fox’s X-Men franchise was also one of the earliest indicators a long-running series focused on comic book properties could work as it ran from 2000-2019, though technically some may argue that this year’s New Mutants will be the concluding installment in said franchise, however with writer/director Josh Boone keeping hopes alive of making the rest of his planned trilogy under the Disney banner should it be successful, the true final installment was really Dark Phoenix. Many of the cast members of the original X-Men films found stardom thanks to the films, namely Hugh Jackman’s turn as Wolverine, and though he has said to have retired from the role following 2017’s Logan, many are still holding out hope for him to return for a proper film featuring him and Ryan Reynolds’ Deadpool on screen together.

The Hulk has seen a real rollercoaster of portrayals on the big and small screen over the years, with some well-received efforts including the Bill Bixby/Lou Ferrigno The Incredible Hulk in the ’70s. After his theatrical debut with the Eric Bana-starring Hulk in 2003, which received a lackluster reception from fans and critics alike, he got the soft reboot treatment in 2008 with Edward Norton in the lead role in the second installment of the MCU, but after creative differences between the star and Marvel Studios, he was replaced by Mark Ruffalo in 2012’s The Avengers.

Prior to making his MCU debut in Marvel’s Agents of SHIELD with Gabriel Luna portraying the Robbie Reyes incarnation of the character, Ghost Rider first came to live-action with the 2007 film of the same name starring Nicolas Cage in the lead role. Though not a critical success, the film was enough of a commercial hit to garner a sequel with Cage returning in the lead role, however after that film’s further disappointing reviews, the star said he was done with the role and a third film was scrapped.

Though now best known for his turn as Captain America in the MCU, Chris Evans first made his comic book debut starring in Fox’s Fantastic Four films in the early naughts as Johnny Storm, aka the Human Torch, alongside Ioan Gruffudd, Michael Chiklis and Jessica Alba. Similar to Ghost Rider, the film was a financial hit despite poor reviews from critics and saw a sequel with the original cast, but after that one’s further poor reviews, a reboot was planned in 2009 at Fox and came out in 2015 to the worst reviews and box office numbers the franchise had seen yet.