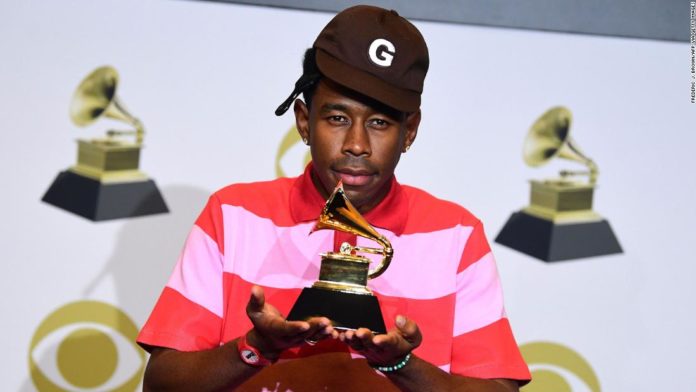 The Recording Academy announced Wednesday that the best urban contemporary album prize will be renamed best progressive R&B album ahead of next year’s ceremony as part of the organization’s “commitment to evolve with the musical landscape.”
The rechristening — which is one of nine key changes to its awards and nominations process — is “intended to highlight albums that include the more progressive elements of R&B and may include samples and elements of hip-hop, rap, dance, and electronic music,” the academy said.
“It may also incorporate production elements found in pop, euro-pop, country, rock, folk, and alternative.”
Harvey Mason Jr., chairman and interim CEO of the Recording Academy, said in a statement that major rules and guidelines have been introduced for the 63rd Annual Grammy Awards “to ensure the Grammy Awards are inclusive and reflect the current state of the music industry.”
Tyler, The Creator is among prominent industry figures to have spoken out about the Grammys’ categories, saying “urban'” was racially insensitive and belittled the innovation of black music.
“It sucks that whenever we — and I mean guys that look like me — do anything that’s genre-bending or that’s anything they always put it in a rap or urban category,” the 29-year-old producer and vocalist told reporters after winning the best rap album at January’s ceremony.
“I don’t like that ‘urban’ word — it’s just a politically correct way to say the n-word to me,” he added.
That month, the Recording Academy announced new diversity initiatives to “ensure that the Academy — and the music business — is truly representative of artists and their audiences.”
“Too often, our industry and Academy have alienated some of our own artists — in particular, through a lack of diversity that, in many cases, results in a culture that leans towards exclusion rather than inclusion,” Mason said at the time.
Among the latest changes are updates to the best new artist category, Latin, R&B and rap fields, plus nominations review committees.
The best rap/ sung performance category is now being changed to the best melodic rap performance to “represent the inclusivity of the growing hybrid performance trends” within the genre.
The renaming of the urban category is the latest development in the entertainment industry which reflects Black Lives Matter-related initiatives prompted by the death of George Floyd.
Republic Records, a division of Universal, recently made the announcements that it would no longer use “urban” to describe its departments or artists.