Home Culture ‘The King of Staten Island’ tries to break Pete Davidson out of... 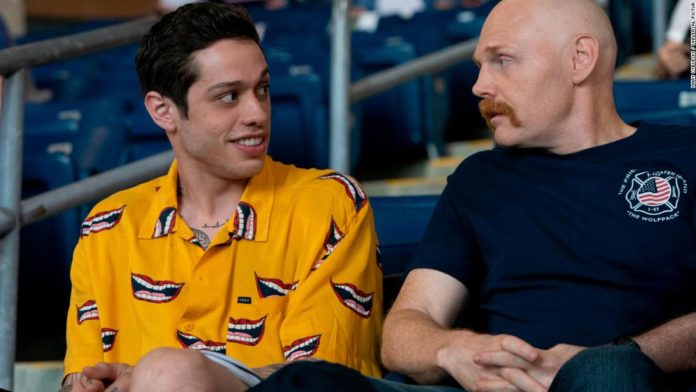 Apatow, Davidson and “SNL” writer Dave Sirus collaborated on the script, which casts Davidson as a 24-year-old slacker principally devoted to hanging out with his goofy friends and smoking pot. His Scott has never gotten over the death of his dad, a firefighter, mirroring Davidson’s loss of his dad (also named Scott) at a young age on Sept. 11, 2001.
What sets the story in motion, though, involves Scott less than the women around him — specifically, his younger sister (Maude Apatow, the director’s daughter), who graduates high school and heads off to college; and their mom (Marisa Tomei), who, faced with a half-empty nest, embarks on a new romance with Ray (Bill Burr), as it happens, also a firefighter.
Suddenly, Scott faces the prospect of having to get his act together beyond his vague dreams of becoming a tattoo artist. That also has implications for his noncommittal relationship with Kelsey (Bel Powley), a local gal who wants more, both out of him and life.
Like his last role in the Hulu movie “Big Time Adolescence,” Davidson is basically playing another Peter Pan type, a boy who refuses to grow up. The extent to which he’ll be forced to change provides the movie’s foundation, although that’s frankly more interesting as seen through the eyes of his mom and her new boyfriend, whose courtship has a sweetness and depth that Scott’s interactions lack.
Ray tries to be a good soldier by bonding with Scott, introducing him to his firefighter buddies, a group that includes a veteran leader played by Steve Buscemi. It’s around here, though, where “King of Staten Island” begins to telegraph sappier qualities that are characteristic of Apatow’s films, which tend to mix blunt comedy (a double entendre, that) with warm and fuzzy flourishes.
The drawback of all that is the movie drags on for 137 minutes, which feels like considerably more than the familiar premise and its aimless central character can fully support. That’s despite the able supporting lineup, which in addition to fine work by Tomei and Burr features Pamela Adlon (“Better Things”) as Ray’s feisty ex-wife.
Davidson himself, of course, found a more lucrative outlet for his talents than Scott pursues, but other wrinkles — from battling depression to growing up with a widowed mom — hew pretty closely to his well-documented biography.
Plenty of “SNL” stars have made the jump to movies, and this conspicuously feels like a test of Davidson’s appeal, in a vehicle tailor-made for him.
We’ll never know if the Davidson-Apatow combination — given the latter’s track record with comedic talent like Steve Carell (“The 40-Year-Old Virgin”) and Amy Schumer (“Trainwreck”) — would have enticed people to theaters, which was to have been the movie’s destination before coronavirus. As is, it’s at best an OK way to hunker down at home if you’re feeling as unmotivated as its protagonist and have nothing better to do for a few hours.
Davidson has demonstrated that he can play a version of himself for established fans. But like its title, “The King of Staten Island” doesn’t really answer whether being royalty in that narrow space can hold up under the bright lights of the big city.
“The King of Staten Island” premieres June 12 on demand. It’s rated R.

Three decades after pioneering reality TV, original cast of MTV’s “The Real World” is back

Love Island confirmed for summer return – but location still up...