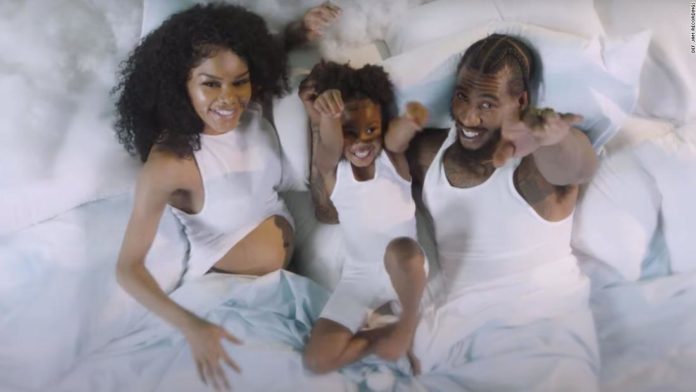 The 29-year-old singer, model and actress revealed a baby bump at the end of the video for “Wake Up Love,” which featured her husband, NBA player Iman Shumpert and daughter Iman Tayla, also known as Junie.
This will be the couple’s second child together. The two have been married since 2016.
“We’re ready, and we’re very excited. Iman is super excited,” Taylor told People. “Junie is ecstatic — I’m talking super ecstatic. Everybody is just excited. I can’t wait. I’ve got three more months left until we meet our little princess.”
Shumpert rapped a verse in the video, which showed the soon-to-be family of four lying in bed together surrounded by clouds.
In an Instagram post announcing the new video, Taylor wrote a note to Shumpert honoring him and the Black Lives Matter movement.
“Though you are the love of my life, my king, my husband & an amazing father. YOU ARE STILL A BLACK MAN FIRST, before anything. And that’s the risk I take as you leave my side and walk out the door every single day. I could have lost you yesterday. I could lose you today. I could lose you tomorrow,” she wrote.
“The sadness of our planet has corrupted mankind’s ability to make empowering decisions. Darkened, but not by the sun; WE still stand up in assembly and cry for help. For these are the reasons I have broken down my defenses; I hear you, I see you, I love you.”
In the closing scene of the music video, Taylor lifts up her shirt to reveal the bump in a heartwarming moment between the family.
Four-year-old Junie can be seen pushing away her father’s hand so she could hug the baby bump, something she does quite often, according to Taylor.
“What she did at the end of the video is Junie the whole time,” Taylor said. “She hogs the whole baby all the time. We were in the bed and loving on one another, and she jumped on the both of us like, ‘I’m here!’ It’s the cutest thing.”
The family has many ideas for what to name the baby, but the three still have a few more months to decide.
The new track follows four other singles from her upcoming studio release, “The Album,” which is set to be released later this month.