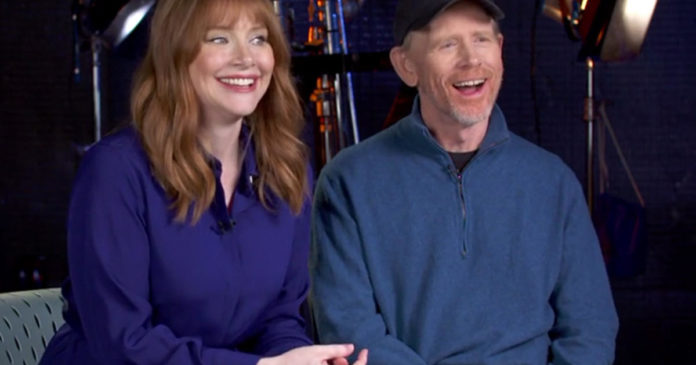 Interviewing a father and daughter can have its moments.

“I feel really privileged to have been the beneficiary of having, like, a great dad, you know?” said Bryce Dallas Howard, of her father, Ron Howard.

And it was pretty clear that with the Howards, that correspondent Lee Cowan was just a third wheel in what was otherwise a lovely family conversation back in February.

There are lots of famous dads with famous daughters we could have talked with about Father’s Day. But fatherhood has been more than just biology to the Howard family, starting of course with Ron Howard’s relationship with his TV dad on “The Andy Griffith Show.”

Ron was six years old when the show began. Bryce said, “My dad couldn’t read at the time … and so my granddad read for him.”

And when Rance Howard (an actor himself) read that very first “Andy Griffith” script, something as a father felt a bit off.

Ron recalled, “He said, you know, ‘They’re writing Opie the way they write every kid in a sitcom. It’s kind of wise-ass and funny, and it’ll get laughs, but wouldn’t it be different and interesting if Opie actually respected his father?'”

When Ron himself became a father, he took those lessons with him. “It’s not so much what you say, it’s really showing up,” he told Cowan. “You just go all-in and say, ‘This is a priority. I’m going to very consciously do this right.'”

And “right” meant being there. He often brought his family to his movie sets; Bryce appeared as an extra on “Parenthood.”  “Like, when I would be grounded, they would ground me from the set, because they knew, like, I did not want to risk that!” Bryce said.

“Really? That was the punishment? Instead of ‘You can’t drive,’ it’s ‘You can’t come to set’?” Cowan asked.

So, perhaps it’s no surprise that she followed her dad into acting. She followed him into directing, too. And this coming Friday, streaming on Apple TV, is her gift to fathers everywhere,” her documentary titled “Dads.”

“My hope is that this is a movie for dads so that they don’t feel so alone,” she said.

It’s often overlooked, but modern dads are taking a more active role now than ever. Double the number of fathers are staying home now than in the ’70s. The ranks of single dads are growing, too. And if you’re going to document these new dads, Bryce Howard figured, why not start at home?

“I wasn’t supposed to be interviewed, I didn’t think,” said Ron, “but I showed up one day, just to cheer my daughter along, and suddenly I was in front of the camera.”

As he said in the film, “I think what ultimately adds up is what they see, what they witness, the way you as a father live your life.”

Bryce said, “I kind of mentioned I was like, ‘You know, and then we could maybe do something like with our family and stuff.’ And he was like, ‘No.'”

Her powers of parental persuasion are strong. She convinced other big names, like Jimmy Kimmel, to tell their dad stories – like the day his daughter’s spit-up ended up in his mouth: “And of course your reaction is to throw this person you know as far away from you as possible, but I didn’t. I held onto her, and I spit as much as I could out. And that’s when I realized, I was a dad.”

Bryce said, “If this is a movie about fathers, it’s a comedy. Like, let’s be clear: This is a comedy!”

And why’s that? “Well, because every day as a parent is a comedy, you know? It just is!” she laughed.

But it’s delving into the chaotic lives of everyday dads where the documentary really flourishes. Take daddy blogger Glen Henry. He had no idea how to be a dad, but given the response to his YouTube channel, he realized no dad really does.

Bryce said, “I realize that there was no rite of passage for the process of becoming a father. Like, there’s a rite of passage for women – you have the baby shower, right? You obviously go through the transition of the birth. And we have excluded men from that narrative, from that incredible moment of transition in your life when you will never, ever be able to go back to that place again.”

That was certainly the case for single dad Robert Selby. He didn’t want to be a father at first; now he can’t imagine anything but:  “My son told me one day he wanted to be like me, and I looked dead in his eyes and I’m like, You’re never going to be like me. I don’t want you to be like me. I’m doing everything in my body to mold and shape you to be better than me.“

We can all do better—the past few weeks have certainly shown us that. But it makes you wonder what the conversation will really be like this Father’s Day.

“As parents, we’re being asked to rise to the occasion,” said Bryce.

Most might happen over Zoom, or after a march on Washington.

“It’s essential to have these conversations with our kids. You can’t ignore the fact there’s a pandemic going on. And we can’t ignore that there is an epidemic of racism that is going on and has been going on for centuries.”

And maybe that’s the not-so-simple secret of being a good dad: never stop learning.

As Ron said in the film, “At its best, a father provides kind of a consistent sense of safety, and therefore possibility.”

Cowan asked Bryce, “So, you start the movie out with the question, ‘What is fatherhood?’ What do you think the answer is now that you’ve done all this?”

“Fathers are caregivers; that’s what they are,” she replied. “I just want dads to know that we see them. We see what they’re up to.”