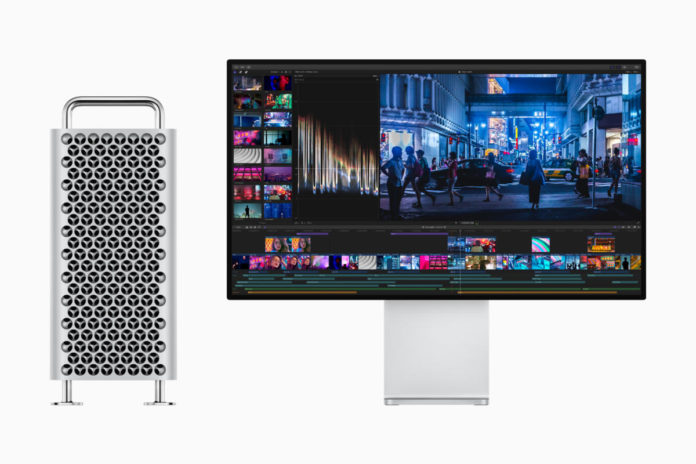 The Mac Pro is Apple’s workstation. It’s designed for professionals who need a powerful and flexible machine, and is ideal for applications that use as many processing cores as possible—video-editing applications, image-editing software, 3D programs, and the like.

The Mac Pro is getting a revival of sorts. The company released a brand-new, redesigned Mac Pro in December 2019, after years of stagnation with the previous, cylindrical Mac Pro.

Apple doesn’t offer a standard configuration choices for the Mac Pro. It’s really meant to be customized by the customer. To give you an idea of where pricing starts: if you configure the Mac Pro with the base components, it’s $5,999 for the standard tower configuration, or $6,499 for a rack mountable version. Learn more about the Mac Pro by reading about its main features below.

Updated 06/15/20: Apple has announced an SSD kit for Mac Pro that allows the user to upgrade the Mac Pro’s internal storage. The kit is available in 1TB, 2TB, 4TB, or 8TB capacities. Apple will be positng information about the kit sometime on June 15.

The Mac Pro uses DDR4 ECC memory, and has 12 DIMM slots. However, the memory configurations that Apple offers don’t always fill all of the slots. Here’s what Apple offers:

The Mac Pro has room for two graphics cards. Apple has three different AMD cards from which to choose.

Along with the new Mac Pro is a new display, the Pro Display XDR. There are two models available: one with standard glass (glossy) for $4,999, and one with nano-texture glass (matte) for $5,999.

The Mac Pro has room for two SSD modules. You can get a single 256GB SSD in the base configuration, or you can get 1TB, 2TB, 4TB, or 8TB of storage that’s installed as a pair of SSDs.

Apple on June 15 announced the user-installable SSD kit for Mac Pro, which you can use if you bought a Mac Pro and want more internal storage. The kit is a pair of SSD modules and is available in 1TB, 2TB, 4TB, or 8TB capacities.

The Mac Pro has an I/O card installed in its half-length x4 PCI Express slot. This card provides two USB 3 ports and two Thunderbolt 3 ports. The Mac Pro also has two 10Gb ethernet jacks. All of these ports are accessible on the back of the Mac Pro.

On top of the Mac Pro, there are two Thunderbolt 3 ports. Apple also says there’s a headphone jack, but by looking at the photos of the Mac Pro, we can’t find it. It’s probably somewhere on the front of the machine.

Apple says that the new Mac Pro is a “designed in pursuit of performance,” capable of handling 8K video editing, 3D applications, software development, and other production-oriented tasks.

Popular Mechanics has an article on how the Mac Pro’s cooling system works, enabling the computer to maintain a high level of performance.

Who is the Mac Pro for?

The Mac Pro provides processing power that the most demanding users need. We’re talking about production environments, like TV and audio recording studios, animation studios, and software developers. If you feel like you can never have enough power, you’re probably the professional the Mac Pro is aimed at.

If you’re more of a “prosumer” than a professional—someone who is an expert Mac user, but doesn’t use high-end apps—the Mac Pro is overkill. You’re probably not going to be able to take advantage of what the Mac Pro has to offer. You also should take a look at an iMac Pro.

How to buy a Mac Pro

Ready to buy a Mac Pro? Go to the Apple Store.

Learn more
on Apple
Note: When you purchase something after clicking links in our articles, we may earn a small commission. Read our affiliate link policy for more details.