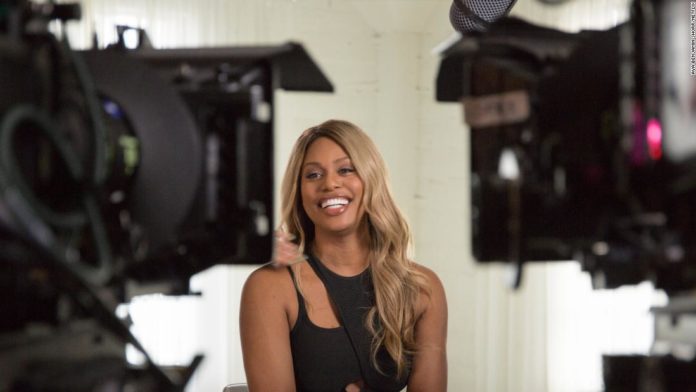 Produced by, among others, Laverne Cox of “Orange is the New Black,” “Disclosure” principally looks at the depiction of transgender people in movies and television, from films like “Dog Day Afternoon” and “The Crying Game” to afternoon talk shows that exploited the issue and latenight comedy that made fun of it, with hosts often asking what interview subjects describe as wince-inducing questions.
A lot of it is “really hard to watch now,” Cox says, as clips roll by from shows like “Donahue” and “Maury.” Yet the documentary also charts how those images have evolved from a problematic subplot on “Nip/Tuck” 15 years ago to the same producer, Ryan Murphy, breaking ground with another FX drama, “Pose.”
“Disclosure” offers a reminder that one of the quickest routes to an Oscar nomination has been for cisgender men to play trans women. It also features a number of performers reflecting on how frequently they’ve been cast as sex workers, and quirks like the “bury your gays” trope, which plagued what were considered early breakthroughs. (Actress Candis Cayne recalls watching the first episode of the 2007 ABC drama “Dirty Sexy Money” only to be horrified when her first line was manipulated to make her voice sound deeper.)
Directed by Sam Feder, “Disclosure” presents the hunger that those interviewed (a list that includes Cox, “Pose’s” Mj Rodriguez, Chaz Bono and “The Matrix” director Lilly Wachowski) felt growing up to see their experiences reflected on screen — reinforcing the sense that they weren’t alone, however flawed and imperfect those portrayals might be. It’s a nuanced look at media’s ability to influence the conversation — to move the needle in terms of public perception — as well as its limits.
“Welcome to Chechnya,” meanwhile, starkly depicts brutality inflicted against gays in the Russian republic, and the heroic efforts of a group of activists to save those at risk through a “Rainbow Railroad” evacuating them to, principally, Canada.
Inspired by a 2017 New Yorker article by Masha Gessen, director David France’s documentary presents first-person accounts of torture tactics that include electric shock, rats and batons to compel gays to turn in others. (France employs a digital “face double” technique, a next evolution on the familiar practice of digitally obscuring subjects’ faces and altering voices in order to protect them.)
Chechen leader Ramzan Kadyrov is shown in an interview calling gays “subhuman.” As for the Kremlin, activist Olga Baranova notes that Russian president Vladimir Putin has looked the other way, using “homophobia and ‘traditional values’ as tools to consolidate his power.”
Those films join a lengthy roster of Pride month programming, much of which has already premiered and is available online. Due to coronavirus, upcoming events have adopted a virtual format, including the Frameline44 Pride Showcase, scheduled from June 25-28.
Among other options, PBS has a lineup of projects available via its app and PBS.org, including “Stonewall Uprising: The Year That Changed America,” which recalls the police raid of gay bar the Stonewall Inn on June 28, 1969, a watershed moment for the gay-rights movement.
The service is also offering the “American Masters” documentary “Terrence McNally: Every Act of Life,” about the playwright and activist, streaming free beginning June 15, along with several virtual discussions.
Another documentary, “For They Know Not What They Do,” premiered June 12 on demand, telling the story of different families of faith with LGBTQ children. It’s director Daniel Karslake’s follow-up to his 2007 film “For the Bible Tells Me So,” and the LGBTQ+ organizations GLAAD and PFLAG are supporting the film’s release.
“Disclosure” premieres June 19 on Netflix. “Welcome to Chechnya” premieres June 30 at 10 p.m. on HBO, which, like CNN, is a unit of WarnerMedia.