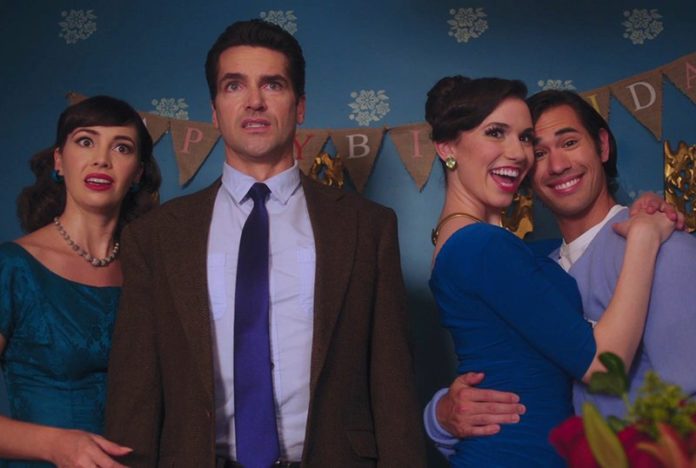 Random Media has shared with ComingSoon.net an exclusive clip from the upcoming horror comedy Vampire Dad teasing the titular’ character’s struggle between his beastly nature and trying to keep his family together. The clip can be viewed in the player below!

The year is 1962 –Kennedy is president, Elvis is king, and the Beatles haven’t come to America yet. The porch swing has been replaced by the Barcalounger where families gather on Sunday nights to watch Bonanza on their RCA color television sets. Children ride their bikes on the street and play games like jacks and hopscotch while perfectly coiffed mothers pushing baby buggies exchange recipes for frankfurter casserole and pineapple SPAM kabob. Like clockwork, dad arrives home at 5:30 PM and fixes himself a scotch while his apron-clad wife puts the finishing touches on a delicious home-cooked meal. Camelot is thriving!

Psychologist Dr. Raymond Walenski and his family are no exception. Raymond is the picture-perfect husband and father until one night when everything changes. Victoria “Goddess of the Underworld” bites Raymond, turning him into a vampire. Victoria recruits Raymond to be the therapist for creatures of the netherworld because monsters have feelings too and they desperately need his help! Raymond struggles with his beastly nature as he treats bulimic zombies, obsessive-compulsive warlocks and manic werewolves with their emotional issues. Meanwhile, Raymond’s devoted wife tries to keep their teenage daughter, neighbors and friends from finding out Raymond’s secret

The film is co-written by Frankie Ingrassia and Kathryn Moseley and directed by Ingrassia and features a cast that includes Jackson Hurst (Sharp Objects), Emily O’Brien (The Young and the Restless), Grace Fulton (Annabelle: Creation) and Barak Hardley (Mockingbird).

Vampire Dad is set to select theaters and VOD on June 16.