Home World As food banks struggle, these CNN Heroes are getting meals to those... 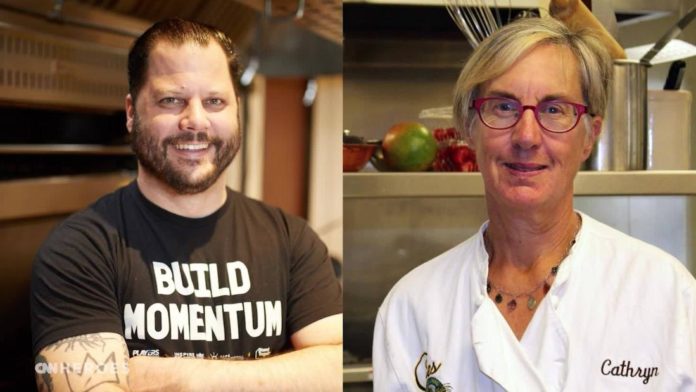 Food banks across the United States are not only struggling to keep up with the need, they are also grappling with supply and volunteer shortages. And in April, disruptions to food supply chains contributed to the largest monthly increase in grocery prices in almost 50 years.
To help ensure those in need don’t go hungry, two CNN Heroes have ramped up their efforts the last few months.
Cathryn Couch and her non-profit, Ceres Community Project, prepare and deliver healthy meals for low-income residents facing cancer and other serious illnesses in northern California. They’ve distributed more than 665,000 meals since 2007.
As the pandemic broke out, it became clear that people with underlying medical conditions were at higher risk.
“The Covid epidemic has significantly increased the demand for our services,” said Couch, a 2016 CNN Hero. “It’s really, really important that this population stays home and stays safe.”
To meet the demand, Couch says her organization has more than doubled the number of people it supports. For recipients facing food insecurity, the group has more than tripled the number of weekly meals it provides.
“The clients we serve are very medically fragile, vulnerable, many of them living alone. Many of them have lost caregivers because of the pandemic,” she said. “That population has the potential for the most complications and mortality if they get the illness.”
The non-profit is now also providing meals to people with Covid-19. And the group is coordinating with local counties and health centers to serve patients on Medicaid who need extra nutritional support.
The meals the group prepares are specially tailored to the nutrient requirements of the client’s illness, Couch said.
“Everything is made from scratch. We are committed to 100% organic and sourcing as many things locally as we can.”
In downtown Dallas, 2018 CNN Hero Chad Houser runs Café Momentum. The non-profit restaurant provides employment, educational support and career counseling to young people coming out of juvenile detention facilities.
Due to the pandemic, Houser temporarily closed the restaurant and with the help of his program participants, turned the space into an emergency food distribution center.
“We refocused the mission really, by listening to the community,” Houser said. “We received a lot of calls from folks asking for help in specifically feeding food insecure students that were dependent upon school meals for their basic nutritional needs.”
In the United States, more than 30 million children rely on free or subsidized school lunches. When schools around the country closed amid Covid-19, many were at risk of going hungry.
Since March, Houser’s program participants have been putting together boxes filled with food items. They donate the boxes to a local school district that is distributing them to students in need.
These efforts also allow Houser and his team to continue assisting the young men and women in their program.
“So much that we focus on as an organization is to provide … (a) stable and consistent ecosystem of support,” Houser said. “It has also continued to provide income for them. When we have millions of people filing for unemployment, it’s one less issue that they have to deal with.”
The project also gives these young adults a way to give back to their community.
“They’re doing a tremendous job stepping up to the plate during this time of crisis,” Houser said. “So many of them have gone to the schools that the meals are going to. They’ve lived in the neighborhoods that the meals are going to. And it’s a full circle opportunity for them.”
It’s an opportunity that ultimately furthers the mission.
“Grappling with anything, even a global pandemic, it starts at a community level,” Houser said. “It starts with a community rallying around each other. It starts with a community holding themselves accountable to themselves and one another.”