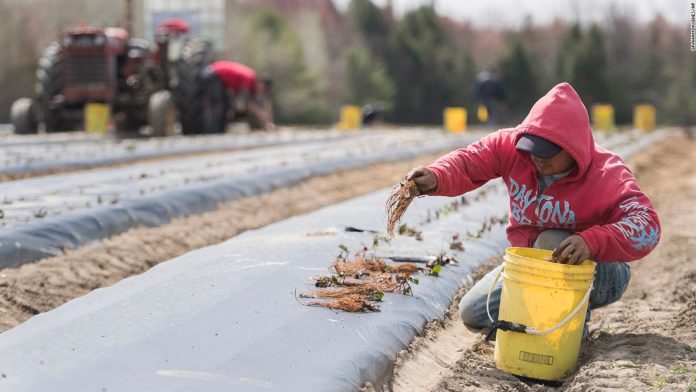 “This is a temporary pause in order to determine the circumstances surrounding the safety conditions on farms,” said Oscar Mora, spokesman for the Mexican embassy in Ottawa.
More than 60,000 migrant workers travel to Canada every year for seasonal work in agricultural industries. A temporary ban means that up to 5,000 Mexican workers are currently waiting to come to Canada.
Ambassador Juan Jose Gomez Camacho, on behalf of the Mexican government, has been in daily communication with the Canadian government to try and understand why and how hundreds of Mexican workers have been infected with Covid-19, weeks after completing a mandatory 14-day quarantine in Canada, Mora said.
CNN has confirmed that two migrant workers from Mexico have died in the last few weeks and dozens more workers have been treated in hospital.
Communal housing on farms and cramped conditions in packing facilities and greenhouses has contributed to the virus spread, acknowledged the local health unit in Windsor-Essex, Ontario, where the death occurred.
The province of Ontario has been the hardest hit by the outbreaks, and its Premier said Monday no one should blame the migrant workers for getting sick.
“They came here, they self-isolated for two weeks and they picked it up since they’ve been here,” said Premier Doug Ford. “I don’t want any finger pointing at these hard-working migrant workers. They’re good people, they mean well, and they’re hard workers too.”