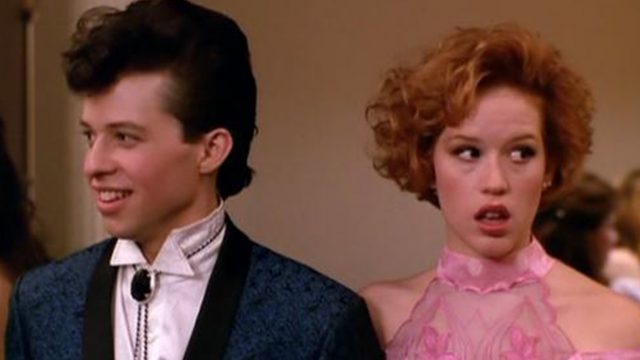 Pretty in Pink tells the simple tale of a young, poor-ish girl who falls for a rich kid. Their worlds clash. All the poor-ish kids have hearts of gold. All the rich kids suck. And that’s the gist of John Hughes’ screenplay, which, compared to his other, more distinguished films about teenage angst — namely, Ferris Bueller’s Day Off, The Breakfast Club and even Sixteen Candles — feels relatively tame; and surprisingly shallow.

Click here to purchase the new Pretty in Pink Blu-ray!

Yet, the classic film still works as a trite bit of pop culture entertainment mainly due to its overabundance of talent. Molly Ringwald shines like a star in what would be her last collaboration with Hughes and displays wonderful chemistry with a perfectly cast Andrew McCarthy; James Spader slithers about in the background as a (what else?) stuck up, sneering snob; and Annie Potts and Harry Dean Stanton bring warmth and humor to their respective parenting roles.

The real MVP of the pic is Jon Cryer, whose Duckie, a plucky fella forever stuck in the friend zone with Ringwald’s Andie, bounces from scene to scene with infectious energy — sometimes too much. He rocks the halls of John Marshall High School adorned in funky attire, and spouts silly lines to the ladies, like, “There’s a good chance I can make you girls pregnant by the holidays,” that usually result in a slap to the face. The poor kid has a passion for life, love, and Otis Redding songs, but frequently gets rejected by everyone including Andie, perhaps because he’s too goofy, doesn’t have money, and refuses to dance to the rhythms of the world.

Andie, like most women, would rather go with Blane, a permanently smiling chap who dresses in fancy suits and feels awkward around “average” people. Since the movie was released over 30 years ago, I assume it’s not a spoiler to say the two end up together at the end. Though, I doubt such a pair would last long enough to contemplate marriage. Their lifestyles contrast too sharply; and it would probably take a horrific tragedy, like, say, the sinking of an ocean liner, to permanently forge the two sides together.

Even so, director Howard Deutch milks the most from Hughes’ screenplay by focusing less on the social distance between Andie and Blane and more on the supporting players around them. The rapport between Andie and her father elicits real emotion; and the scenes between Andie and her boss, Iona, who is forever adapting to the men in her life, feel genuine and real. But my favorite bits have always been those involving Andie and Duckie, who behave like an old married couple in that they argue, mostly enjoy one another’s company, and have no sex life. These two probably belong together, but their relationship wasn’t built on desire or passion, but, rather, acceptance of each other — the ingredients needed to forge a lasting relationship. But who the hell wants that in a movie?

Rom coms only work because we never see the end result. Movies like Pretty in Pink, Sleepless in Seattle and Sixteen Candles explore the perilous journey of romance, but then cut to the end credits just as our characters come together. A more interesting movie might focus on what happens after our heroes kiss. Do they simply discard their friends? Would Duckie be content as the third wheel? Would Blane want Duckie creeping around Andie’s room every night? Would Blane’s parents welcome Andie’s dad? Would Andie be content to let her dad live in an old rickety house by himself while she lived with Blane in a mansion on the other side of the tracks? Would Blane buy Andie’s dad a house, even if the old guy continued to neglect his job duties? Would a rich Andie eventually become one of the hoity toity women she vehemently despised? If Blane and Andie broke up, would she willingly go back to her old life?

As a teen, I was perfectly content to bypass these questions. Now, as a wiser-ish man, I find myself gravitating towards Hughes’ original ending in which Andie and Duckie embrace one another — as friends — in the middle of that posh prom dance floor as a middle finger to high society. That feels like the natural finale this film deserved.

That said, Pretty in Pink still evokes plenty of laughs and serves as a solid conclusion to the Molly Ringwald-John Hughes trilogy. The themes explored here are old fashioned, but decidedly more mature than those drummed up in Sixteen Candles and Ferris Beuller, even if they are only casually touched upon. It’s still a got darned classic and a healthy reminder of what movies once were — dare I say, magical? As an adult, I enjoyed it as a companion piece to earlier Hughes films, and as a fun throwback to my youth, but found the narrative derivative and overtly simplistic when compared to other comedies of its ilk I have since come to appreciate — Moonstruck, When Harry Met Sally, Forgetting Sarah Marshall, Jerry Maguire, or Punch-Drunk-Love, for example. Those films presented characters who truly experienced a journey and arrived at a more appropriate, authentic conclusion.

Pretty in Pink presents a million reasons for its heroine to kick that snotty rich asshole to the curb, but wobbles at the knees the minute he flashes that smile.

Eddie Murphy wants to go back to stand-up when the pandemic...

Meghan and Prince Harry open up to Oprah Winfrey in exclusive...