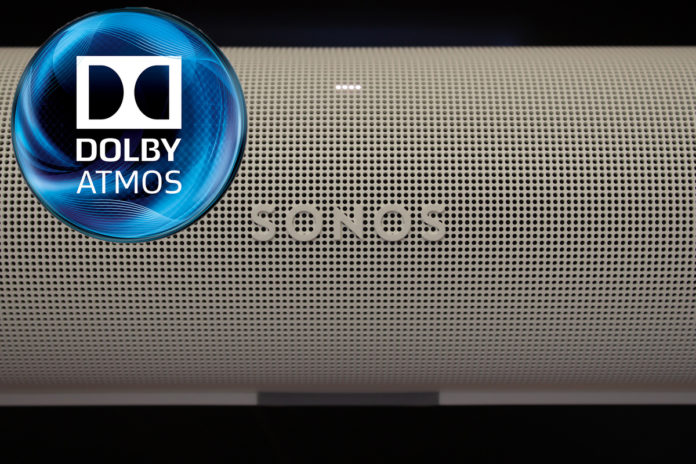 TechHive Executive Editor Michael Brown was able to test pretty much every feature of the new Sonos Arc soundbar save one: its Dolby Atmos performance.

Mike faced a couple of key obstacles on that score. For starters, the 2017 Samsung Q7-series 4K QLED TV he used during his review doesn’t support eARC, a newer HDMI feature that can handle (among other things) the transmission of lossless audio from a TV to a soundbar. Because the Dolby Atmos metadata on a Blu-ray disc resides on the disc’s lossless Dolby TrueHD track, Mike wasn’t able to test Atmos on the Arc—which has just one HDMI port—using his 4K UHD Blu-ray player. (You can read more about ARC and eARC here.)

The other way to enjoy movies and TV shows with Dolby Atmos sound is via streaming video services, such as Amazon Prime Video, Apple iTunes, or Netflix. Such services transmit Dolby Atmos via Dolby Digital Plus, a lossy format that the original ARC can handle.

Problem solved, right? Not so fast. Mike lives in an area of rural Northern California that lacks high-speed internet; the fastest DSL service he can get isn’t quite fast enough to stream Netflix at 4K, which is a requirement for Dolby Atmos sound on that service.

So, Mike shipped the Sonos Arc to my Brooklyn apartment, where I have a 2019 LG C9 4K OLED TV that does support eARC, plus a speedy internet connection (about 200Mbps downstream). That meant I could test the Arc’s Dolby Atmos using both my Sony 4K UHD Blu-ray player and my Apple TV 4K streaming set-top box.

The results: quite good, if a tad subtle. (To be fair, the Arc’s performance would likely be more exciting when connected to optional wireless surround speakers and a dedicated subwoofer, but that would drive the price of the package way up.) While the Arc’s Atmos performance didn’t blow me away (although in-your-face height cues aren’t ideal, either), I was still impressed with the depth and realism of the Arc’s Atmos-enabled soundstage.

I started with one of our go-to Dolby Atmos demo reels: the scene in X-Men: Apocalypse where a young Scott Summers wreaks havoc in a bathroom stall as he uses his laser-beam eyes for the first time. What makes the scene interesting from an Atmos standpoint isn’t so much the initial mayhem, it’s the sound of the particles of plaster falling from the ceiling, and the Arc delivered the aural experience convincingly.

Next, I spun up the 4K UHD Blu-ray of Blade Runner: 2048 and queued up the scene where K pilots his spinner to the ruined orphanage in the outskirts of San Diego. I was impressed by the patter of rain against the windshield and the sudden, frightening “pop” of incoming fire from attackers far below. It’s a vertiginous sequence that relies on 3D audio cues for much of its effect, and the Arc the soundtrack of this arresting scene with aplomb.

I also tried the opening titles of Superman, a famously thrilling title sequence that got the Dolby Atmos treatment a few years back. Accompanied by John Williams’s Oscar-nominated score, the titles swoosh up, down, and across the screen, and there was a palpable sense of height as Marlon Brando’s title soared over my head (or at least, so it felt).

I rounded out my Atmos testing on the Arc with the Dolby’s Atmos-enabled “Leaf” trailer, with the Arc deftly handling the sound of a seedpod twirling in the air amid crackling branches in a dense forest. The spacious audio in this subtle Dolby trailer requires a light touch, and the Arc didn’t disappoint.

While I was mostly pleased with the Sonos Arc’s Dolby Atmos performance, I had quibbles (well, one quibble and one outright complaint) about a couple of non-Atmos audio issues.

First, I felt that the Arc’s overall sound was somewhat bright—that is, more heavily weighted toward the higher audio frequencies, favoring treble more than bass. I noticed this while watching and listening to a variety of movies and TV shows, as well as while cranking some tunes.

There’s nothing necessarily bad about “bright” audio; in the end, it’s all about taste, with some listeners preferring a “warmer” sound that tilts more toward lower frequencies (that’s me), while most audiophiles seek a “flat” sound that plays it right down the middle. Simply be aware that the Arc’s audio signature is (to my ears, anyway) crisp rather than deep. That’s not my cup of tea, but it might be yours.

My second observation is a criticism: namely, that the Sonos Arc’s built-in woofers sometimes sounded like they were straining—or even popping—during moments of intense bass.

What’s interesting about this issue is that it can be tricky to reproduce, and generally speaking, the Arc’s woofers handled most low-frequency effects without skipping a beat. For example, the Arc smoothly cornered the bassy turns during 2 Fast 2 Furious’s frantic opening street race.

Unfortunately for the Arc, the soundbar faltered during one of my favorite movie sequences of all time: the chase through the asteroid field in Star Wars: The Empire Strikes Back (the new UHD Blu-ray version). The roar of the Millennium Falcon’s engine as the freighter swerved, banked, and corkscrewed across the screen made the Arc’s woofers emit an odd, worrisome shudder. Dialing down the Arc’s bass EQ level and toggling off the Loudness setting made the Falcon’s booming engine sound a tad smoother, but the soundbar’s stumble during this key scene remains a disappointing and distracting fail.

Other users on Sonos’s community board have also reported bass hiccups with the Arc, but there’s also some good news. Replying to one of the complaints, a Sonos rep said that company engineers were “able to reproduce” the issue and are “working on a fix for it now,” so fingers crossed. I’ve reached out to Sonos separately about the potential software fix and will update this article when I hear back.