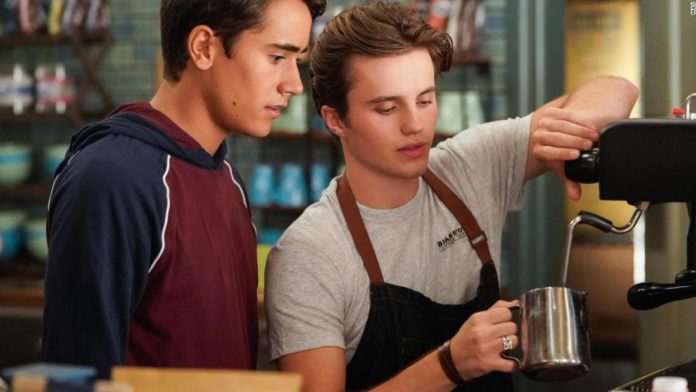 Victor (Michael Cimino) — the oldest of three kids — has moved to Creekwood High in Georgia, which feels positively progressive compared to his hometown in Texas. He makes contact with Simon (Nick Robinson) via email, using him as a sounding board as he comes to grips with who is — and more to the point, who he loves.
Victor is still figuring that out — sexuality is fluid, it’s noted — torn between his attraction to a pair of new classmates: Mia (“This is Us'” Rachel Naomi Hilson), an accomplished girl growing up without a mom; and an out boy, Benjie (George Sear), with whom he works. Of course, Victor isn’t the only one with secrets, including issues pertaining to his parents (Ana Ortiz, James Martinez) responsible for the family’s relocation.
Coming from a less accepting background, Victor struggles with the prospect of being anything but straight and sharing that with his family, exacerbated by a visit from his bigoted grandpa, who is judgmental about Victor’s little brother playing with the wrong kind of toys.
It’s a testament to the growing presence of such fare that “Love, Victor” doesn’t break much new ground, which wouldn’t have been the case not that long ago. What the show makes clear, though, is that because each individual story has its own hurdles, there’s no one-size-fits-all approach.
As noted, the project (whose producers, Isaac Aptaker and Elizabeth Berger, wrote the film) was originally developed for Disney+, which — still testing the parameters of its programming niche –opted to pass the young-adult series on to its sister streaming service Hulu.
Beyond the likable young players, the show features solid adult supervision, which also includes Mekhi Phifer and Sophia Bush, as well as smallish roles for Andy Richter and Ali Wong as quirky teachers.
If it’s not the apex of prestige streaming fare, the 10-episode first season proves plenty watchable, with a well-rounded assortment of characters and sharp dialogue, like Mia’s fast-talking friend Lake (Bebe Wood), who doesn’t want anyone to know when she begins dating Victor’s nerdy neighbor (Anthony Turpel). “I care too much about what other people think,” she confesses.
That, in a nutshell, is what the series and indeed much of the young-adult genre is all about — getting past fretting about what people think in order to be who you truly are. To the extent we never completely outgrow high school, all concerned should take a measure of pride that most people should come away thinking “Love, Victor” is pretty good.
“Love, Victor” premieres June 17 on Hulu.