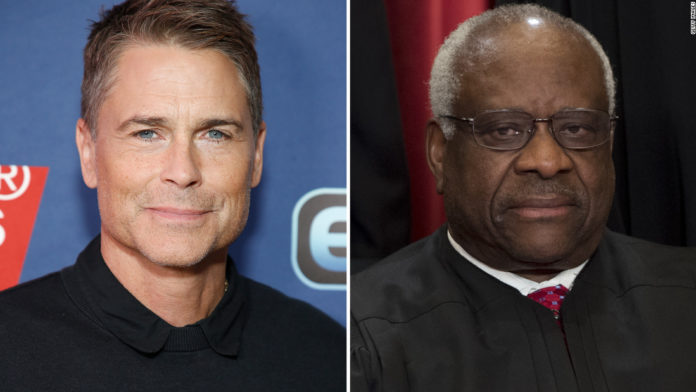 The “Parks and Recreation” star has been in Hollywood for so long that he has multiple friend groups, including with people most folks aren’t even aware he knows.
Thomas definitely falls into that latter category, and Lowe talked about it with Conan O’Brien on a recent episode of the late-night show host’s podcast, “Conan O’Brien Needs a Friend.”
Lowe was discussing his new podcast, “Literally! With Rob Lowe,” and said that since he’s been in the industry for 40 years, he has a diverse group of buds to invite on as guests.
“It could be Brat Pack people, it could be ‘West Wing’ people, ‘Parks and Rec’ people,” Lowe said. “It could be people (that) people are surprised I’m friends with… It’s going to be really, really fun.”
When O’Brien asked for the name of someone folks would be surprised about, Lowe named Thomas — much to O’Brien’s amazement.
The “Mental Samurai” host explained that the pair met years ago after Lowe got inducted into a Horatio Alger organization, which he described as “a very exclusive, very amazing society that provides scholarships for kids who come from just terrible, terrible backgrounds but they’re the best and the brightest in their classes.”
“And the society of people in it are pretty studly, he’s one of them,” Lowe said. “That’s how we met. They put the medal on me in the halls of the Supreme Court.”
Thomas put the medal on him, Lowe said, and it kicked off their friendship.
Thomas gave Lowe his cell number and told him he could call anytime, which the actor did when his son was going to law school, Lowe said.
“I call this cell phone and he answers it,” Lowe said. “And you’re like, ‘Geez. Shouldn’t there be, like, a vetting process?’ And 45 minutes, he’s giving me advice on what my son should do vis-a-vis law school and clerking.”