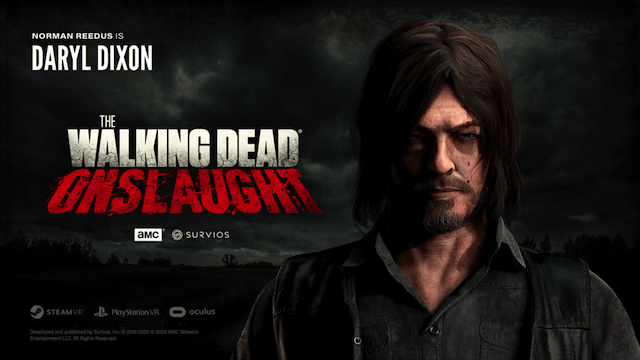 Norman Reedus Confirms His Role in The Walking Dead Onslaught

It’s been a little over a year since AMC announced that it was teaming up with Survios Inc. for a new VR game set in The Walking Dead universe. But now, the studio has just revealed that the game is currently in the final stages of development. Plus, they announced that a beloved character from the TV series will be part of the story. Via their official YouTube page, Survios has confirmed that Norman Reedus will reprise his role as Daryl Dixon in The Walking Dead Onslaught.

Reedus made the announcement after completing his voiceover work for the new game. For this part of the process, it sounds like Survios built a makeshift recording booth in Reedus’ own basement, presumably to prevent the spread of the coronavirus. Reedus also teased that he “screamed [his] head off,” so expect Daryl to run into some tight situations when the game finally hits stores.

Additionally, the new video hints that Survios and AMC will premiere new gameplay footage before summer’s end. This year’s convention season has taken a few hits thanks to the ongoing pandemic. However, it’s possible that the developers will virtually share new Onslaught details during next month’s San Diego [email protected] festivities. They may even announce other cast members from the series who will appear in the game. Aside from Reedus, Onslaught will also reportedly feature Melissa McBride as Carol and  Josh McDermitt as Eugene.

The Walking Dead Onslaught will be available for PlayStation VR, Steam VR, and Oculus Rift later this year.

You can check out Reedus’ video below. Are you excited to play the new game? Let us know in the comment section!

When Women Support Each Other, Incredible Things Happen

Tyler Perry lent Harry and Meghan a home and security