Home Lifestyle Panerai Is Celebrating 70 Years of the Big, Bold Luminor Marina With... 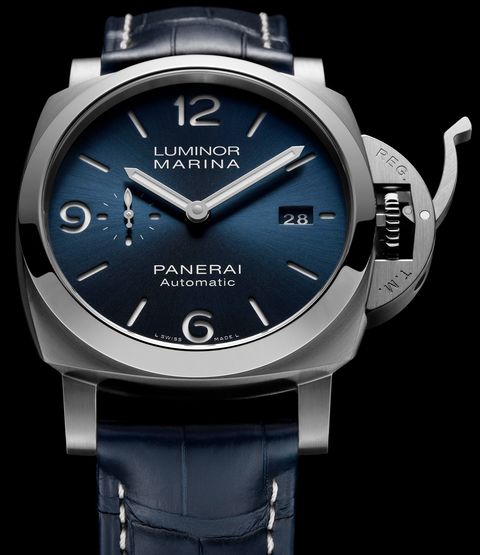 Until the mid 1990s, only the most ardent of watch nerds were aware of Officine Panerai, an obscure maker of various bits of technical military equipment from Florence, Italy. Not for long. As military contracts dried up at the end of the Cold War, then-CEO Dino Zei decided to leverage Panerai’s deep history of making jumbo dive watches and make the brand available for the first time to the public. From the mid 1930s to the 1950s, you see, Panerai had supplied stonking-big, Rolex-made dive watches under contract to Italian Navy divers. Like its predecessors, Zei’s new 44mm Luminor Marina was big, bold and not to everyone’s taste.

It was not an immediate success. But a series of chance happenings, none of them created by Panerai itself, propelled the brand into the imaginations of watch lovers. First, Sylvester Stallone wore two different Panerais on screen in Daylight (1996). The story that Sly chanced upon the brand when shopping in Italy is one of the enduring urban myths of Panerai. In fact, the mysterious-sounding Monty Shadow, a Montenegrin photographer and socialite, engineered the introduction to Stallone and, subsequently, the commission of a large batch of more than 100 Luminor watches from the brand, re-labelled with the word “Slytech” on the dial and then doled out (ostensibly on Stallone’s behalf) to the crew on Daylight. Genuine originals are rare as hen’s teeth, and can reach over six figures.

The Richemont Group (then named Vendome) bought Panerai in 1997, and, fueled by other Hollywood blockbuster wrists—including Schwarzenegger’s in Eraser (1996)—it began to gain serious traction as a big, bold watch for big, bold men. In fact, the brand single-handedly drove the trend to larger, look-at-me watches, a shift that still hasn’t entirely abated nearly 25 years later. 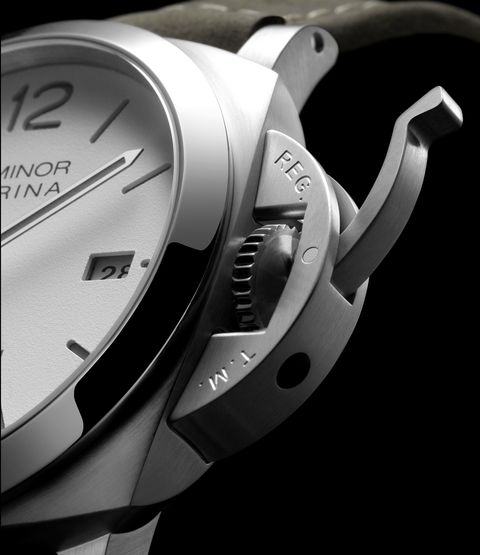 A closeup look at the Luminor Marina PAM01314.

Big is especially beautiful if it means saving your life, so visibility was always the driving preoccupation for the old Panerai in its designs. This made a lot of sense if your job entailed fiddling with limpet mines or riding on two-man torpedo subs under enemy ships at night. Visibility was ensured by a big dial and stripping away from it all superfluous markings, using a sandwich dial construction where the few markings are cut out to reveal big blobs of glowing, bright-green lume at night. It’s hard to think of a more blissfully simple, functional dial than the Luminor Marina, which first debuted in 1950. 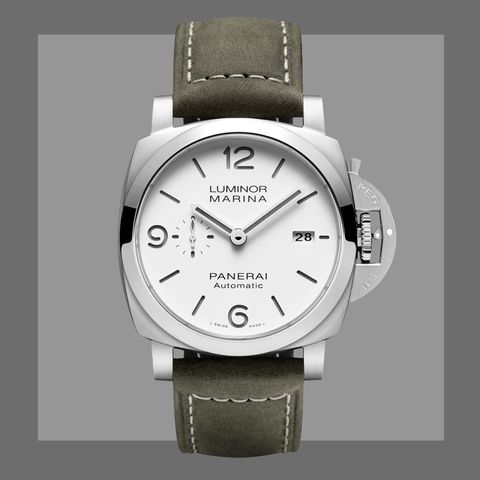 This month Panerai celebrates 70 years of that iconic watch with two new designs including a blue sunray dial on a blue alligator strap with white superluminova that fluoresces green (PAM01313). The second, which becomes available in July, is a real belter: a white sandwich dial (a first for the brand) with gray lume markers in daylight that glow green at night (PAM01314). Gray lume is only a very recent innovation, and it creates a startling new minimalist look for the stable. Both of the the editions, which carry a P.9010 in-house movement, are priced at $7,700.