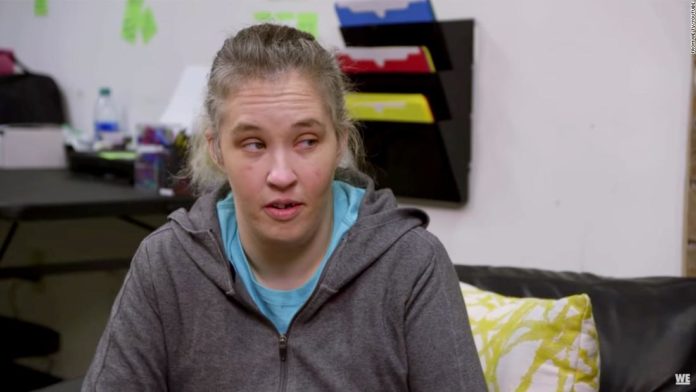 Shannon and her boyfriend were doing “quite a bit” of methamphetamine, and the habit got expensive, she said during a reunion with daughter Lauryn “Pumpkin” Shannon for a recent episode of the WE tv series, “Mama June: Family Crisis.”
“I mean, it was a couple ounces a day,” the elder Shannon told her daughter. “Our habit was $2,500 a day, if not more.”
Shannon, 40, also admitted to selling the family home because she was broke.
She first came to fame as the mother of Alana “Honey Boo Boo” Thompson, a child beauty pageant contestant who was the star of the very popular TLC series, “Here Comes Honey Boo Boo.”
That series, a spinoff of the child pageant reality show, “Toddlers & Tiaras,” ran from 2012 until it was canceled in 2014 amid reports Shannon was dating a registered sex offender, something she denied at the time. Shannon later admitted to having been in that man’s company and said one of Alana’s sisters had been fathered by another convicted sex offender.
In 2017, Shannon landed another reality show, “Mama June: From Not to Hot,” on WE tv after she lost almost 300 pounds, going from a size 18 to a size 4, following weight-loss surgery.
The latest series follows Shannon’s brushes with the law and Alana, 14, going to live with Lauryn, 20.
Shannon said it’s not the first time she’s used drugs and added that Lauryn knew that.
“It’s been the first time since we’ve been older that you’ve ever been strung out,” Lauryn Shannon said.
The younger Shannon talked of protecting her sister as well as her own 2-year-old daughter.
“You have to understand too, like, I can’t have Ella and Alana around that,” Lauryn Shannon told her mother.
Her mother assured her that she was doing better and getting clean.